Catherine B. Scallen: Rembrandt, Reputation, and the Practice of Connoisseurship 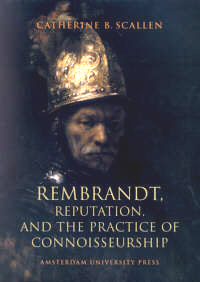 This well-researched and valuable study examines Rembrandt painting scholarship from 1870 to 1935, with focus on the four experts who defined the artist's œuvre during those years: Wilhelm von Bode (1845-1929) and his three protegés, Abraham Bredius (1855-1946), Cornelis Hofstede de Groot (1863-1930), and Wilhelm Valentiner (1880-1958). Among their museum positions were directorships respectively of the Berlin Museums, Rijksmuseum and Mauritshuis, Rijksprentenkabinet, and Detroit Institute of Art. Before they began their individual and sometimes collaborative efforts to define Rembrandt's painted œuvre, the artist's paintings numbered between 250-350, an estimate that is generally accepted today. These four scholars enlarged the number of paintings to about 700; the majority of these are now regarded as not by Rembrandt. They attempted to establish scientific criteria for authenticating Rembrandt paintings, even though over time their own standards became inconsistent and lax. These four had wide-ranging interests and responsibilities. Hofstede de Groot and Bredius accomplished much still-valuable archival research, though supplemented by the work of S.A.C. Dudok van Heel, Walter Strauss, and others. Valentiner wrote the first comprehensive catalogue of Rembrandt's drawings, and presented much interpretive analysis. [1] His early collected essays, published in German and English, show a direction that is markedly different from that of Bode and Bredius, in his effort to integrate the production of art with its culture. [2] These four experts tended to regard Rembrandt's paintings as somewhat independent from his drawings and etchings. Their views may reflect the difficulties inherent in studying the drawings. However, the prints of Rembrandt and his pupils were then catalogued by Dmitri Rovinski, whose approach, of inclusivity rather than exclusivity, parallels that of Bode. [3] One theme throughout Scallen's book is the authority invested in these four experts, and another is the limited authority of others. A third is the role of the art market upon attribution.

The first systematic catalogue of any artist's work, in any medium, was devoted to Rembrandt's etchings. In his 1751 catalogue raisonné of Rembrandt's etchings, Edmé F. Gersaint offered many remarks on the quality and appearance of these prints and also on the Rembrandt paintings he had studied first-hand. [4] Since then, Rembrandt's etchings and paintings have received more evaluative attention in oeuvre catalogues than those of any other artist. It is thus logical that a study devoted to the practice of connoisseurship should focus on Rembrandt. During the period under consideration here, there was a concerted international effort to define the œuvres of many major artists; it is worth recalling that the German series "Klassiker der Kunst" was a leader in this effort. In the Introduction, Scallen skillfully discusses art historiography in general and the methods current for the later nineteenth-century. Baron Karl Friedrich von Rumohr and Gustav Waagen combined close looking and historical study. Giovanni Morelli and Bernard Berenson focussed on comparative visual study that did not take into account data extrinsic to the work of art. The four Rembrandt scholars would blend aspects of these diverse approaches to arrive at their individual conclusions about authorship, date, and quality.

Chapter One establishes the pivotal position of Bode. His review of Carel Vosmaer's 1868 "Rembrandt: sa vie et ses oeuvres" not only began his career as a Rembrandt scholar, but also commenced the now-established format of a review essay, in which the author presents a cogently argued critique of the material presented and his own ideas. Vosmaer's monograph is notable as the first on Rembrandt to combine biography, archival sources, chronological and thematic catalogue of works, and the artist's placement in "national and cultural-historical significance." (41) Bode also acknowledged his debt to the Berlin historian Leopold von Ranke, whose positivist methodology combined archival research, source criticism, and public presentation and critique. Ultimately more important than Bode's conclusions are his means of arguing his observations. Bode's 1883 catalogue of Rembrandt paintings was his response to the shortcomings he noted in the Vosmaer monograph. One case of a public debate has recent parallels: In 1875, Alfred von Wurzbach, based in Vienna, argued that the Self-portrait (Germanisches Nationalmuseum, Nuremberg) reproduced a similar painting (Mauritshuis, The Hague), and that neither one could be by Rembrandt (53). Bode insisted that both were by Rembrandt. In 2003-2004, these paintings were the subject of a remarkably similar debate. The new evidence was infrared reflectography, which revealed that the Nuremberg version had a loose underdrawing, while the Hague version had a tight underdrawing that seemed to copy the Nuremberg painting (326). According to David Bomford of the National Gallery (London), the Nuremberg portrait preceded the Hague version, and both may have been by Rembrandt, and possibly his workshop. [5] Technical examination, often directed at long-recognized puzzles, increasingly serves to illuminate the creation and authorship of art works.

Chapter Two concerns methods of comparing art works, with national interests often in the background. Chapter Three examines the opposition between the experts and Max Lautner, an outsider art critic whose 1891 "Wer ist Rembrandt?" proposed that most of the paintings then considered by Rembrandt were in fact by Ferdinand Bol. Chapter Four documents the prolific nature of Rembrandt studies during the 1890s, with the first internationally organized exhibitions of Rembrandt's art in Amsterdam (1898) and London (1899). These prototypical "blockbusters" included conferences of experts and public debates. The half-length painting "Christ and the Woman Taken in Adultery" (formerly T. D. Walker collection) provoked much discussion. Émile Michel and Jan Veth objected to Rembrandt's authorship, but Hofstede de Groot vigorously defended his attribution on the compositional similarity to the London 1644 painting of the same subject (153). Bode supported the attribution by relating it to an "original design by Rembrandt, preserved in an etching executed by Picart" (177). Such observations, taking graphics into account, seem rare in these discourses. Chapter Five concerns the growth of American collecting of Rembrandt paintings. Bode visited the United States twice (1893 and 1910), and wrote about the Rembrandt paintings in America, despite his general estimation of their mixed quality. In 1908, Bode was instrumental in getting the Metropolitan Museum to hire Valentiner as curator of decorative arts. Chapter Six explains how the four Rembrandt scholars may have had disagreements over attributions among themselves, but nonetheless their opinions prevailed over those of others. Chapter Seven discusses reinvigorated Rembrandt scholarship following World War I. Valentiner's interest in multiple versions of certain paintings was shared by Bredius and Hofstede de Groot. This shift of interest to pupils would become a constant factor in later Rembrandt studies. Chapter Eight is devoted to the American amateur art historian J. C. Van Dyke, whose 1923 "Rembrandt and His School" narrowed Rembrandt's authentic œuvre to 81 paintings. The last chapter assesses Bredius' 1935 Rembrandt catalogue, revised by Horst Gerson in 1969, and Valentiner's career in the United States.

The author concludes that "the significance of these four men lies in their recasting of connoisseurship as a professional activity, their shaping of connoisseurship as an activity promoted through public debate, and their development of modern modes of art historical communication." (322) Their contributions became diminished during the 1930s, when an emerging generation of scholars would examine Rembrandt's art more rigorously in relation to its cultural milieu and iconography. Foremost among these scholars would be K. Bauch, F. Schmidt-Degener, H. van de Waal, O. Benesch, J. S. Held, and H. Gerson.

Scallen brings Rembrandt studies up to the present, with the often publicly controversial activities of the Rembrandt Research Project. We are indebted to her for intelligently evaluating this material and lucidly presenting it. She has recreated the spirited exchange among connoisseurs of the past that has resonance in current scholarship. Her dedication of this book to Julius Held is appropriate. In 1932, he was the assistant to Max J. Friedländer, Bode's successor as director of the Kaiser-Friedrich-Museum; he might have, in turn, become Friedländer's successor. Friedländer greatly admired Bode's leadership of the Berlin Museums, yet he noted that Bode's "literary activity had little significance and hardly any lasting value." [6] Such an estimation might seem harsh, but as Scallen concludes, the connoisseurship debates among Bode and his contemporaries provide a cautionary tale (322). It is inspiring and sobering to recall these scholars, their publicly argued convictions, and their voluminous publications. The present flourishing state of Rembrandt studies is part of their legacy.