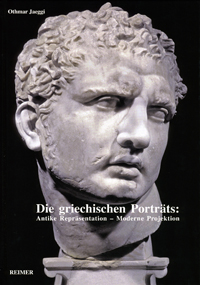 In 2008 the Winckelmann-Institut of the Humboldt-Universität zu Berlin hosted a photographic exhibition of ancient sculpture from the Conde de Lagunillas Collection, now housed in the Museo Nacional de Bellas Artes in Havana, Cuba. Sir John Beazley attributed much of the collection's Attic pottery, but its marbles remain unstudied and unpublished. The two institutions are now busy fixing this, and this book (the author's Habilitationsschrift) is a by-product of their work.

Visiting the show that June, I was struck by the fact that most of the pieces were disembodied heads: anonymous and heavily restored. All were unprovenanced.

One in particular, a so-called Dying Alexander (figs. 15-16), caught my eye. Fifteen years before, I had published a book on Alexander portraits and had taken a stand on what I deemed acceptable as such. The head was somewhat recut, but its proportions, features, and especially its wavy, "leonine" hair and prominent cowlick or anastolê fit the bill nicely.

Yet its poise was extreme and its face anguished, with downturned mouth, quivering lips, flaring nostrils, and upturned brows: pathos incarnate. Since the ancient world never produced portraits of the dying Alexander (a romantic fantasy), it must be a Giant or some other barbarian. Yet it matched Alexander's iconography in every other way. An absurdity, it began to reduce me to a state of aporia or (pace Wittgenstein) mental cramp.

This is an extreme example, but not unique. In 1981 Wolfgang Radt, excavation director at Pergamon, had suggested that its famous Alexander head was actually a Giant from the Great Altar. And why do the heads of (e.g.) Demosthenes and Metrodoros echo those on late classical Attic gravestones?

So what is a Greek portrait and how, absent body and context, can we recognize one? What of the endless museum labels and press releases touting this or that new head as Alexander, Cleopatra, Caesar, or "unknown Greek philosopher" (or athlete / general / statesman)? Are most of them - and the glittering edifices of scholarship built on them over the years - bogus?

Jaeggi boldly confronts this elephant in the room and wrestles it to the ground. His first chapter explores the loaded terms 'Bild' (image), 'Bildnis' (portrait), and 'Individuum' (individual), and consults authorities as diverse as Giuliani, Himmelmann, Hölscher, Schefold, and Zanker on the question "what is a Greek portrait?" No easy answer emerges.

Now baffled too, Jaeggi boldly cuts the Gordian Knot, reducing the entire corpus to a mere trio of "aesthetics": the aesthetic of youth, of wisdom, and of femininity (18).

Chapter 3 opts decisively for Position Two. Invoking Xenophon, Plato, and Aristotle, Jaeggi finds that the Greeks believed that portraits can't directly express what we would call interiority. To seek innate character in them is simply anachronistic, a projection of Freudian psychology and Christianizing bias. Equally pernicious is Winckelmann's concept of "beautiful realism", an enlightenment relic still venerated by some.

Selecting Themistokles and Perikles as examples, Jaeggi concludes that all these approaches ultimately lead to aporia. In fact, both portraits are deeply conventional: Themistokles appears as an Olympic heavyweight and second Herakles (his notorious boxer's ear is actually a sculptor's glitch (58), and Perikles as but one strategos - albeit a highly successful one - among many.

Chapter 4 then tries to define a Greek portrait as neutrally as possible. It is "a representation of a human being that mostly expresses an official or political message and is recognizable by the latter's precision and differentiation" (62). So the key is now this mimetic vocabulary and its differentiation via the image's "intention, patron, location, date, base, inscription, material, coloration, size, sex, pose, clothing, attributes, age, coiffure, mimicry, etc., down to the smallest details" (63).

Semiotics and its "codes" can help. Along with "formulae" and "types" they return us to the concept of an "aesthetic" (18): a flexible structure composed of static, dynamic, and normative features that define a particular set of individuals across time (66), within which any given sitter can be accommodated.

The next three chapters investigate the three "aesthetics" floated in Chapter 1. Chapter 5 treats ruler portraits and the aesthetic of youth; Chapter 6 tackles the old and wise; and Chapter 7 discusses women. In sum, they conclude that within each particular aesthetic, the range of facial variation is quite small, and that most allegedly individual features are in fact sculptural metaphors for strength, courage, wisdom, prudence, modesty, and so on. Comparative facial outlines (fig. 33) show that many "individual" portraits of Hellenistic kings are in fact strikingly similar. In each case the "aesthetic" decisively trumps the person, who basically differs from his or her peers - and is identifiable today - only by (a) posture, clothing, attributes, and so on; and (b) inscription and context.

Chapter 8 turns to style and development. Skepticism reigns. A lack of dated monuments, stylistic pluralism, and the latter's revaluation as largely generically determined (i.e., by a given aesthetic) rather than diachronically so, yanks the rug out from a century and more of scholarship. Change occurs mainly because social standards and roles evolve, not because the art of sculpture itself does.

Finally, Chapter 9 concludes that portraiture in the modern sense is alien to the Greek world. Its "portraits" convey socio-political roles and qualities rather than physical realities. Even the idealized heads of the Roman emperors are a world away.

This crude précis hardly does justice to the scope and subtlety of Jaeggi's argument, though its explosive potential should be obvious. I predict some ruffled feathers in the birdcage of the Muses. Since my space allotment is now exhausted, I offer some random comments in conclusion:

(1) What exactly did êthos (character) mean in this period, and did it really exclude a sense of interiority? Is the "science" of physiognomics really so irrelevant (40, 43)? A TLG search seems essential.

(2) How does Jaeggi's thesis square with our understanding of other key texts? I think of (e.g.) Plutarch, Moralia 335B, recording Alexander's criticisms of his portraitists; Theophrastos, Characters 2, noting that only flatterers say that one resembles one's portrait; and Poseidippos 36, 39, 116, 119 and Nossis 4-6, assimilating portraits of queens and courtesans to Aphrodite.

(3) Should we not trade the rigid (and romantic) notion of individuality for the nuanced anthropological one of personhood? Individuality is absolute, but personhood is socially constructed and malleable. It depends upon many factors, including one's social milieu, relationships, and the role(s) one adopts or rejects. So isn't it more helpful for portrait studies?

(4) We need to sideline "realism". Greek art rarely seeks realism per se but usually prefers what Roland Barthes once called (in another context) a reality effect. As for its supposed "age of realism" (basically, after ca. 330 BC), what of (e.g.) Theophrastos's quip, noted above?

(5) Is Jaeggi's tripartite model sufficiently diverse, defined, and nuanced? How far do (e.g.) Seleukos and Ptolemy Soter (who are easily distinguishable) really fit an "aesthetic of youth?" And isn't his "aesthetic of wisdom" actually one of maturity, and wisdom a bonus? Which of them best describes Herakles and the doltish Old Fisherman (figs. 38-41)?

(7) Recognition psychology has made great strides in probing how we differentiate, recognize, and read faces (see, e.g., http://en.wikipedia.org/wiki/Face_perception). Maybe it's time for portrait studies to take this on board.

(8) Finally, context is all. If we needed more ammunition against the "black" art market and for better care and excavation of ancient sites, Jaeggi provides it - in spades.