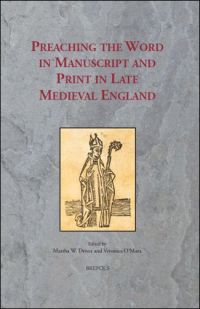 This book honors Susan Powell, whose major contribution to medieval studies, and especially medieval sermon studies, is her two-volume edition of John Mirk's Festial, published by the Early English Text Society. But, as the List of Publications at the end of volume reveals, Powell has made significant contributions in many areas related to late-medieval England and medieval sermon studies, and the essays in this present volume reflect many of her varied interests.

The introduction states explicitly that this book casts a wide net, looking at "how homilists and teachers in the Middle Ages preached the word of God in the widest possible sense" (1). More specifically, the essays in this collection explore "the multiple ways in which the sermon in England in the later Middle Ages both influenced and was influenced by other devotional and didactic material, both implicitly and explicitly" (1). While all of the essays are well researched and erudite, the subjects of a few of them are only marginally connected to sermons, so readers primarily interested in late-medieval preaching may find that some of the essays are not pertinent to their research. But the book succeeds in bringing together "various threads" and "new texts and ideas" and in suggesting "potential future avenues for research" (1).

The volume is divided into two sections: Studies and Texts. The majority of the essays are in the Studies section; the Texts section comprises three chapters, each of which includes newly edited or re-edited Middle English texts related to sermon studies. The book is bookended by probably its two most interesting chapters: Derek Pearsall's enlightening exploration of the contribution and career of Gerald Owst, the "first founder of English sermon studies" (11) and Veronica O'Mara's fascinating analysis of one of the first modern editions of a late-medieval Boy Bishop sermon.

Pearsall sets the stage for the collection by offering an assessment of Owst's two seminal studies (1926 and 1933) on late-medieval preaching in England, studies still consulted by scholars. Pearsall also addresses Owst's limitations as a scholar - his lack of objectivity and his defensiveness - and offers a possible explanation for these limitations. Pearsall points out that Owst's "greatest achievement" was "his scouring of the libraries for material from their collections of popular English sermons" (14), which Owst quoted extensively in his two volumes. So if Owst reveals many biases in his analysis of this material and was "something of an outsider" (25) in the world of academe, "the good work of his two books is not undone" (28).

The essays in this collection then take up a number of different threads in the world of medieval studies, especially as these threads relate to Powell's scholarship. One of them is of course Mirk's Festial. In "Preaching with a Pen: Audience and Self-Regulation in the Writing and Reception of John Mirk and Nicholas Love," John J. Thompson looks at the advent "of a vernacular reading public" during the long fifteenth century and shows how the works of Mirk and Love reveal the opportunities "preaching with the pen" offered to English authors and their audiences both in manuscript and print. Jeremy J. Smith's "Punctuating Mirk's Festial: A Scottish Text and Its Implications" explores the punctuation practices of a Scottish manuscript of the Festial (Cambridge, St. John's College, MS G.19) whose exemplar was an edition printed in Rouen, France, in 1499. By comparing punctuation practices in a variety of manuscripts and printed editions of the Festial, Smith argues that "the sophisticated punctuation of MS G.19" may relate to the "emergence of a more extensive reading culture where readers (and indeed preachers) may be presumed to have read more books, but where they read each of these books less often" (184).

Other essays further explore the practices of scribes and early printers. For example, Stephen Morrison analyzes the scribal practices employed in four fifteenth century manuscripts of the same late Middle English sermon cycle. He argues that scribes "display a persistent willingness to depart from the text of their exemplars" (120) and often do so intelligently, showing "conscious efforts of rewriting" (122). Julia Boffey examines the ways that scribes and early printers treated the presence of verses in Middle English prose texts, and she argues that Middle English verses "seem to have remained malleable elements of the larger rhetorical constraints of which they were a part" (272).

Martha W. Driver's "Preaching in Pictures from Manuscript to Print" explores images of preachers in manuscripts and early printed books. Driver looks not only at actual portraits of real preachers, such as John Alcock and John Fisher, but at images of Mohammed and of poets performing their own poetry, such as the image of Chaucer in the famous Troilus frontispiece, images that reveal the way performance and preaching are conflated.

Several essays also examine texts that are not properly sermons but share features with sermons. In "The Devil as Narrator of the Life of Christ and the Sermo literarius," William Marx labels the fifteenth-century poem, The Devils' Parliament, a sermo literarius because the text encourages its readers to imagine it as a sermon whether or not it was read or performed aloud. Oliver Pickering presents a new edition of All Souls' Day from The South English Legendary, the style of whose author, the so-called "outspoken poet," reveals "strong preaching characteristics" (283). Pickering offers an in depth analysis of this text, examining the way the poet uses devices to "suggest a listening audience not in fact present" (284). Because of the difficulty of the language, Pickering has extensively but unobtrusively glossed his edition.

Two essays in the collection respond to Powell's research on Syon Abbey. Vincent Gillespie discusses the Martiloge, the Latin martyrology created at Syon Abbey for its male convent. The Martiloge, Gillespie argues, became "the written manifestation of the house's self-knowledge, a thesaurus of institutional memory, and an exemplar of institutional and spiritual idealisms" (141). Gillespie is primarily interested in a section of lections added to the Martiloge which address "clerical idealism and priestly life" (141) and from which we can perhaps learn what the expectations were for the Birgittine men, one of which was good preaching.

Kari Anne Rand examines another important text produced at Syon Abbey: the Syon Pardon Sermon, which lists the details of all the pardons obtained at Syon. While the Syon Pardon is written in Middle English and seems to be aimed at a lay audience, Rand does not believe that it was ever intended to be read aloud. But while it may have been unpreachable, it was influential beyond the Abbey, "spread by means of extracts which constituted written advertisements for the Syon indulgences" (335). The appendices to Rand's chapter include several excerpts from the Syon Pardon, along with a number of these advertisements.

The book closes with what for this reader is one of its most interesting contributions and one that ties together many of the book's threads: Veronica O'Mara's "A Victorian Response to a Fifteenth-Century Incunabulum: The 'Boy Bishop' Sermon and How It Was First Edited." O'Mara not only discusses one of the few surviving Boy Bishop sermons, preached at some point between 1489 and 1496 and printed twice (c. 1496 and c. 1497-98) by Wynkyn de Worde. She also begins and ends her essay by looking at the editorial mindset and practices of its first modern editor, John Gough Nichols (1806-73). O'Mara points out that "[g]iven the wealth of Middle English sermons subsequently discovered, it is perhaps ironic that what was effectively the first homiletic incunabulum to be edited in 'modern' times was such an engaging, albeit somewhat idiosyncratic, exercise aimed at children as much as adults" (362). The essay includes a new edition of the Boy Bishop sermon based on De Worde's second edition in which O'Mara notes variants from the first edition along with Nichols' choices when they differ from hers.

If one turns to this volume for essays primarily concerned with preaching or for texts of extant sermons proper, one might be disappointed. However, all of the essays reflect Powell's scholarly work in some way, making this a rich and eclectic collection, even if some of the subjects explored have a tangential relationship to preaching. So while the book's title might be a bit misleading, the essays here each make a substantial contribution to our understanding of the religious culture of late-medieval England. The book unfortunately includes no indices which might have been helpful.