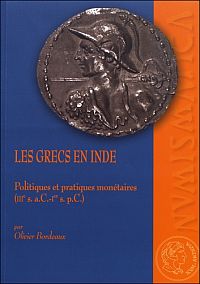 Olivier Bordeaux's book, based on his doctoral research, contributes to the methodology of using numismatic evidence to study Hellenistic Bactria. He focuses on six Graeco-Bactrian and Indo-Greek kings: Diodotus I, Diodotus II, Euthydemus I, Menander I, Eucratides I, and Hippostratus. While this selection of kings may appear arbitrary, Bordeaux intentionally focused on monarchs whose coins, he explains, present major questions of chronology and design. Further, while many scholars of Bactria focus on individual kings or coin series, Bordeaux examines a relatively large number of kings in an effort to paint a bigger picture of Bactrian history. The book is arranged into three large chapters: a historiography, numismatic conclusions, and historical conclusions.

After discussing the state of Bactrian scholarship and the outstanding problems in the field in the historiography, Bordeaux moves into the heart of his work in the numismatic section. Bordeaux's plan was to examine as many coins as possible, and his more than 4,000 specimens are impressive. Laudably, he chose to sample coins from the global auction market instead of public collections. This is the less popular route, but it needs attention, because within the marketplace one can find otherwise unknown coin types, and the vast quantities of coins required for deep comparison. His methodology is a die study, in which he compares the designs on coins to determine which ones were struck from the same die. This allows one to arrange the coins in groups and in chronological order, assisted by other features such as the control marks and the king's apparent age in the portrait. The historical section of the book threshes out these findings to add to the narrative of Bactrian history. There is some redundancy between the two chapters, as they discuss the same findings, with the latter section extrapolating a little further on those findings. Separate chapters devoted to each king, from coins to conclusions, might have been more effective.

One of the major historical issues that Bordeaux addresses is that of the Diodotids. Diodotus I was the satrap of Bactria under the Seleucids before he declared independence; then his son, Diodotus II, was King of Bactria. Euthydemus I usurped the Bactrian throne from the Diodotids. The coins are unusual as there is a series depicting Diodotus I's portrait and patron god, but the name of the Seleucid King Antiochus. There are also various coins with portraits of both young and older looking "Diodotus", and their patron god, but the name and title of King Diodotus. Numismatists have long been attempting to sort out the coinage and history of this two-man dynasty. Based on die links and control marks, Bordeaux affirms the mainstream view that Diodotus I declared independence incrementally, first issuing coins in the name of Antiochus, and then as an independent king in his own name. Bordeaux then makes an original claim that Euthydemus deposed the father, took over his mint, and began minting coins, while at the same time, Diodotus II made a short-lived effort to mint his own coins in competition with Euthydemus. This is based on not only shared control marks between Diodotus I and Euthydemus, but even a shared obverse die. This conclusion is logical, but the matter still remains open. Consider the possibility that Euthydemus could have overthrown the son, and acquired the elder's die that had remained intact in a storeroom somewhere.

Another major issue that Bordeaux confronts is the interaction between Menander and Eucratides. The two are considered to have ruled around the same time, and literature tells us that Eucratides, while King of Bactria, was militarily active in India, Menander's locale. Bordeaux compares the various facets of the two royal coinages, with a special focus on the design of the legend. Eucratides at one point switched to a curved legend, such as Menander used. This, combined with control mark usage, leads Bordeaux to conclude that Eucratides conquered some of Menander's territory, and commandeered his mint and its engravers. According to Bordeaux's further analysis, Menander reconquered his lost territory after Eucratides' death. Again, this narrative is credible, but the evidence does not close the case. Eucratides' mint officials could have viewed the curved legend design on Menander's coins and simply preferred it, as it allows more space for the image.

The sections on Hippostratus do not focus on that king alone but bring in discussions of several other contemporaneous Indo-Greek kings as well, including Telephos, Apollodotus II, and the Indo-Scythian Maues. He finds connections among them, affirming that Hippostratus is the clear descendent of Apollodotus II, but the link with the Indo-Scythians remains murky. These sections are less conclusive than those of the earlier kings and do not shed a lot of light on Hippostratus' reign. Since they refer to a minor, extremely late monarch, they do not seem to fit as well with the rest of the book.

Since the field of Hellenistic Bactria is so lacking in evidence, new conclusions that enlarge its historical narrative are always welcome. Bordeaux provides a number of conclusions that seem logical. There are still a number of tough questions that remain to be asked of both the evidence and our own assumptions, even if those questions carry us farther from an answer. Most of the conclusions that Bordeaux makes rest on an assumption shared by many other Bactrian numismatists: namely, that monarchs who used the same control marks on their coins must be connected to each other, whether by family, conquest, or some other close interaction. While such a connection is enticing, there is unfortunately no evidence for a single overarching meaning behind control marks. Bordeaux admits this and, in line with other scholars, correctly points out that the marks cannot signify places, dates, magistrates, artists, or even mints, because of their wide geographical spread and centuries-long endurance. Individual kings certainly used them deliberately and for administrative purposes. Demetrius I of Bactria, for example, used control marks to distinguish coin production teams that included die engravers and strikers. It is a leap, however, to suggest that one king's use of control marks was dictated by his predecessor's or rival's use of the same marks. Rulers may have simply copied marks seen on circulating currency, as a matter of convenience. After all, nomadic polities copied entire coin types from the Bactrians. Bordeaux indeed acknowledges that some complications arise from the assumption that shared control marks indicate a shared minting operation. For example, he ponders why Antimachus I and Apollodotus I used the same mark simultaneously in different regions. Therefore, as we must question the assumption about control mark connections, we must also question conclusions that follow from it.

In the book, Bordeaux smooths out multiple rough patches in Graeco-Bactrian and Indo-Greek history. Rather than one overarching argument, he deals with numerous small issues and puzzles. He puts to rest several controversial theories, while some problems remain mysterious. Bordeaux certainly put exhaustive effort and attention into his sample of 4,117 coins, and he seems to have bled them almost dry. There are naturally still parts of the history of these six Graeco-Bactrian and Indo-Greek kings that remain unknown, but these are things that perhaps a purely numismatic study cannot tell us. Overall, Bordeaux fills in several knowledge gaps in the field of Hellenistic Bactria, and his book is a necessary contribution to scholarship.