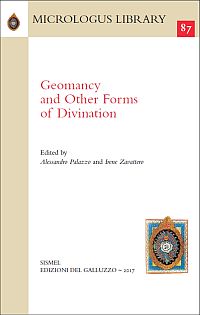 Among the divinatory practices that flourished during the Middle Ages, geomancy, despite its fortune and contemporary cultural relevance, has only lately begun to receive the recognition and scholarly attention it deserves. Its connections with other forms of divination, its controversial and seductive history, and its impact on the current debate concerning estimation and intention are just a few of the reasons that make this subject highly promising for the field of medieval philosophy. The present volume aims to kindle interest in geomancy and other forms of divination and provides essential readings for anyone seeking to evaluate the role of these practices in the Middle Ages.

The papers in this volume were originally presented at the conference "Geomancy and Other Forms of Divination. Foreseeing Events and Dominating Nature: Models of Operative Rationality and the Circulation of Knowledge in the Arab, Hebrew and Latin Middle Ages", held at the University of Trento on 11-12 June 2015 with the support of Progetto FIRB Futuro in Ricerca 2012 (University of Trento - University of Bari - University of Lecce). Its contributions are arranged thematically in four sections: Texts and Geomantic Tradition (5-221), Hebrew and Arabic Geomancy (225-288), Divination and Astrology (291-442), Magic and Images (445-535). A general introduction by Alessandro Palazzo offers an exhaustive overview of the relevant scholarship on divinatory arts and geomancy in particular, and effectively outlines the organisation of the volume and the relevance of each contribution to the current debate. Final remarks by Agostino Paravicini Bagliani recapitulate the focus of single articles and highlight salient findings by referring to the principal themes laid out in the four sections of the book. Both introduction and conclusion describe in relatively accessible terms the key themes and topics and, picking up the prominent features of the volume, function as a guide to its reading.

The first section opens with an article by Thérèse Charmasson, undisputed authority on Latin medieval geomantic literature, whose Recherches sur une technique divinatoire (1980) is still an invaluable reference. Her contribution provides background information for the following articles, which deal with geomantic texts and their traditions. Two of these articles concern the Estimaverunt Indi, one of the earliest extant Latin treatises on geomancy, translated from Arabic and of unidentified authorship. The first, by Irene Zavattero, focuses on its manuscript transmission and includes a critical edition of its prologue; the second, by Alessandro Palazzo, aims at elucidating why the Estimaverunt Indi was among the texts condemned in 1277 by Bishop Étienne Tempier and includes a critical edition of two short fragments of this treatise. A contribution by Pasquale Arfé deals with the manuscript tradition of the Ars geomantiae, one of the most notable divinatory works of twelfth-century Spain, and focuses specifically on its Epilogus, of which a diplomatic-interpretative edition is provided in the appendix. An edition is also included in Elisa Rubino's contribution on the Geomantiae attributed to William of Moerbeke, whose authorship is discussed by both Pasquale Porro in his article on Thomas Aquinas's De sortibus and Alessandra Beccarisi in her article in the third section. An article by Charles Burnett focuses on early Latin Hermetic texts, highlighting the role of reason over inspiration in geomantic practice.

The second section deals with Hebrew and Arabic geomancy. Marienza Benedetto explores the role of geomancy and other divinatory practices in the Jewish Middle Ages, showing the ambiguous status of these practices within this context. Josefina Rodríguez-Arribas deals with the divinatory literature that goes under the name of Sefer ha-goralot and which refers to two different techniques, namely lots and geomancy. The last article of this section, by Blanca Villuendas Sabaté, addresses a corpus of geomantic fragments from the Cairo Genizah, written in Judeo-Arabic, which are likely to preserve the oldest traces of Arabic geomantic literature.

The third section is dedicated to astrology and forms of divination with an astrological background. David Juste explores the practice of onomancy and provides us with an introduction to and an edition of a work entitled Spera sancti Donati, which seems to be one of the earliest medieval Latin treatises on divination. Danielle Jacquart reveals, through a meticulous analysis of biblical commentaries, the arguments that underpin the condemnation of astrology and other kinds of divination; her contribution constitutes a further perspective on the issue addressed by Alessandro Palazzo in the first section. The contribution by Irene Caiazzo concerns the attitudes of some twelfth-century astrologers towards astrology and celestial causality; it offers an exhaustive status quaestionis on the topic and seductive parallels between the authors she considers. The authorship of some works attributed to Arnau de Vilanova is examined by Sebastià Giralt, who by many convincing arguments demonstrates the misattribution to Arnau of all the treatises that could be described as "astrological". The final article of this section, by Stefano Rapisarda, deals with the almost simultaneous appearance of chiromancy and spatulomancy in Mozarabic Spain and Plantagenet England and focuses on a manuscript preserved at the British Library that constitutes an exceptional collection of divinatory techniques written in the vernacular.

The last section of this volume relates to magic and images and includes contributions by Jean-Patrice Boudet, Isabelle Draelants and Nicolas Weill-Parot. Boudet explores the change of the term necromantia to nigromantia, explaining the conceptual process underlying the shift. Draelants focuses on the status of the magical and divinatory arts within the encyclopedias of the second quarter of the thirteenth century, providing a timely and illuminating comparison of texts and sources. Weill-Parot, finally, deals with images, divination and good fortune from the thirteenth to the fifteenth century, elucidating the different processes and implications involved in magic performed with talismanic images and divination through images.

An index of persons and locations and an index of manuscripts are given at the end of the book. Notes are placed at the foot of the page including valuable and up-to-date bibliography. Contributions are variously written in English, Italian and French, and all include abstracts in English.

The outstanding merit of this volume, edited by Alessandro Palazzo and Irene Zavattero, is that it also provides a clear overview of progress in editing geomantic texts, by referring consistently to what has been done so far and what we might expect in the immediate future. While firmly belonging to the highest level of scholarship, this volume has the invaluable merit of appealing to those, whether or not they are specialists, who wish to gain a comprehensive perspective on geomancy and the other forms of divination popular during the Middle Ages.