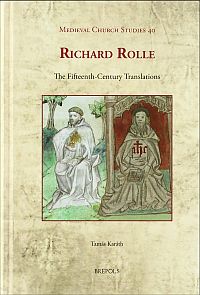 In this rich monograph, Karáth investigates the fifteenth-century translations of four of Richard Rolle's works, two of which are originally written in Middle English while the other two in Latin. Richard Rolle (died 1349) was an English hermit-mystic of the early fourteenth century whose writings were influential in England throughout the late medieval period. Some of his ideas were also controversial, especially for later fourteenth-century thinkers, but one of Karáth's key arguments is that, during the fifteenth century, the readers of Rolle's works focused less on controversial topics and treated Rolle as an "established author of the devotional canon" (239), using him to create "a new model of contemplation" (243). Karáth argues that the fifteenth-century translations helped to "shape a new authority of Rolle, which reflects the cultural and devotional transformations of the period" (239). To make his case, Karáth relies primarily on a rigorous philological analysis along with corpus linguistics.

Karáth's introduction begins with a brief discussion of modern translation theory, and he states that his book "problematizes translation as a series of episodes in a long process of transforming cultural discourses and social mentalities" (2). Karáth also names the challenges he faces in using medieval translations to draw conclusions about such social mentalities, one of which is a general problem faced by anyone studying medieval translations: the inability to locate the exact original form of the text used by the translator. Karáth's other challenge is conceptual, having to do with what many scholars call "vernacular theology," a theology, scholars argue, that competed with the authority of the Latinate Church. Karáth notes that, while he had begun his investigation assuming that there was such a competing theology, his analysis of these translations has "desconstructed and overwritten" (5) this assumption.

Chapter one, titled, "Rolle in Hindsight: Legacy and Translations," provides the context for the rest of the study, first by providing a biography for Rolle, as much as this is possible because of a "scarcity of facts and a plethora of retrospective readings of his person, authority, and influence" (13). Karáth also explains the three key elements in Rolle's mystical experience - calor, dulcor, and canor - which were central to "the self-fashioning of Rolle as a mystical authority" (17). This chapter also gives an overview of Rolle's later fourteenth-century critics, who distrusted Rolle's claim that a mystic can experience a real physical heat in his or her union with God and his claim that the soul can be purified from sin in this life by way of the burning fire of love. The chapter ends with a discussion of Rolle's own translating strategy, which is "characterized by a complementarity of transliteration and free commentary" (29). This section also sets out the Rollean canon as established by Nicholas Watson.

Chapter two focuses on the Latin translations of two of Rolle's English works: Ego dormio and The Form of Living. Both translations are extant in the same manuscript, a manuscript that seems to represent "an isolated experiment in the afterlife of Rolle" (36) while there is also some evidence in the Latin translation of Ego dormio that at least one more manuscript with this translation exists. Karáth focuses his analysis primarily on Ego dormio because the translation of The Form of Living is remarkably similar in terms of its textual strategies and diction yet does not contain large-scale editorial interventions compared to those in the Latin Ego dormio. Karáth identifies two tendencies in this translation, showing how the translator adopted Rolle's work "for a new context," likely a monastic community, and for "new generic frames" (72), using Rolle's text to refute claims for universal salvation, which was not Rolle's own purpose in writing this work.

In chapter three, Karáth turns his attention to the only known medieval English translator of Rolle's works: Richard Misyn O. Carm. Misyn translated two of Rolle's Latin works: the Incendium amoris and the Emendatio vite. While he is the only translator of the Incendium amoris, he is one of seven translators of Emendatio vite, all seven of which Karáth analyzes in his fourth chapter. In this chapter he focuses on the Incendium amoris. Scholars have characterized Misyn's translation as awkwardly literal, but Karáth argues that Misyn "intervened in important aspects of Rolle's mystical experience, while reinstating Rolle as an eremitic ideal for his own spiritual endeavors, as well as for his brothers and readers beyond the Carmelite Order" (78). This chapter presents what is known about Misyn, an analysis of three manuscripts in which his translation is extant, along with a detailed discussion of Misyn as editor, which includes an analysis specifically of Misyn's treatment of Rolle's mysticism centering on the concepts of calor, dulcor, and canor. Karáth concludes that Misyn's overall purpose was to "tun[e] Rolle's devotional model and mystical discourse to a lower intensity and affectivity," thus portraying "a more disciplined contemplative" (139).

Chapter four, the final and lengthiest chapter, explores the seven independent translations of Rolle's Emendatio vite, five of which are extant in more than one variant. The work itself is extant in 108 manuscripts, evidence of its popularity. The translation dates range from the late fourteenth century through the fifteenth century, but Karáth argues that, despite this, the corpus has coherence. His aim in this chapter is to "see the seemingly isolated episodes of the translation of the same text as a process indicating new sensitivities in the late medieval discourse of mysticism" (141). While Karáth relegates a great deal of his textual support to appendices, this chapter is nevertheless rich in textual evidence. Karáth first gives an overview of each version and its manuscript contexts and audiences before turning to each version in detail and its translation strategies and concerns. His ultimate conclusions confirm the point he had made in chapter three about Misyn: that translations of Rolle's work "intended to channel and shape responses to affective experiences by providing a more disciplined model of performing affects" (237).

While it is easy to get bogged down in the sheer volume of his evidence and the complexity of some of his discussions, Karáth does persuasively argue the importance of his investigation and makes a persuasive case that scholars may want to rethink the assumption that there was a competing vernacular theology. While this study may be of interest to scholars of translation theory and medieval translation generally, it is aimed primarily at academics who are well versed in Middle English. While some of the Latin quotations are translated, the Middle English quotations are not. Nevertheless, this is a well-grounded study and often fascinating study. It will be of use to scholars of English mysticism, Middle English translation, English religious history, and Richard Rolle.