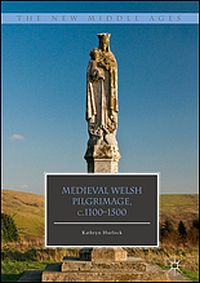 There are few trends in contemporary historiography which cannot touch, in some way or another, on pilgrimage. Historians of gender and social distinction, of economics and society, of architecture and materiality, of travel and cultural exchange, of spirituality and worship - all can claim the topic as their own. A book-length study taking a self-consciously theoretical and non-totalising approach to medieval pilgrimage is, then, to be welcomed. Hurlock's ambition, and a very good one, is not to provide (yet another) gazetteer of pilgrimage sites or synoptic history of the field but rather a series of theoretically-informed essays on different aspects of medieval pilgrimage in and from Wales.

At its best this combines useful historiographical observation with a large mass of historical data. Chapter 3, for example, draws on a number of recent texts to argue that historians tend to get hung up on pilgrimage distance without acknowledging that arduousness can be self-imposed on a short journey, that different shrines demanded different forms of pilgrim behaviour, privileging different challenges or experiences, or that length could refer to distance, duration or challenging topography. Hurlock argues too that the bond to a local shrine was more than simply convenience, and adduces an interesting will to that effect. If the historical material against which these observations can be tested is somewhat thin on the ground and if the theoretical arguments do not develop very far after being introduced, that does not do any damage to the importance of the points being made.

Similarly, Chapter 5, describing patterns of pilgrimage within families and wondering about how these shared experiences created Durkheimian social bonds 'at home', is a useful corrective to the typically individualistic emphasis on pilgrimage choice and 'experience' found in many secondary texts. Architectural patronage is also discussed as a family matter - although the evidence is often somewhat murky - and linked to the patronage of poetry. This seems a rich topic for further work - quite how did shrine and poem enter into relationship with one another? Another chapter argues (if briefly) for the importance of social networks during pilgrimage and for the significance of collective listening to poetic accounts of pilgrimage in elite Welsh households. Pilgrimage, pace the Turners, was deeply socially embedded and the social context could vary widely from pilgrim to pilgrim. Hurlock has a tendency to flatten medieval reception - some perhaps were bored, or mocking, or critical of pilgrimage poetry, while we know little of who constituted the audiences - and, following Christine Carpenter, I would caution against extending the word 'community' to describe just any group, but the points are well made.

Other approaches are more problematic, however, above all when 'theory' (meaning, largely, work by anthropologists and social scientists over the last century) is treated as a source in itself rather than entered into a dialectical engagement with historical texts. Chapter 4, for example, concerns 'authentic pilgrimage', using a charged and problematic adjective with a multitude of usages in scholarship - Heideggerian, Sartrian, Augustinian and so forth. It is unclear whether Hurlock is arguing that 'authenticity' was an important interpretive category for medieval pilgrims (it appears sometimes in quotation marks but usually not) and, if so, what precisely the term meant in medieval discourse. When Hurlock does provide a definition of 'authenticity', it is from a recent business studies text (although it is not for 'authenticity' per se but for the feeling of authenticity by modern consumers) but she neither critically reviews it nor convincingly argues for its utility in the study of medieval Welsh pilgrimage. Indeed, its requirement for an individualised experience - something diametrically opposed to medieval pilgrimage patterns if desirable for modern shoppers - rather demonstrates its ineffectiveness in historical interpretation.

In fact, the chapter is largely concerned with the materiality of medieval shrines, which is well surveyed. Hurlock argues, however, that all of this can be understood as part of the 'creation of original authenticity' by their owners. (Given medieval scepticism about, say, fake relics there is at least some reason to be doubtful that 'authenticity', or 'original authenticity', was something that could be 'created'.) The descriptions that she cites do not indicate, to my mind, that what medieval poets found visually salient was to do with 'authenticity' rather than, say, contemporary standards of aesthetic propriety or a conventionalised semiotics of sanctity. Nor does she discuss how such descriptions belong within established poetic discourses: are these standardised ways of describing a holy site or do they identify distinctive features? The use of tropes and genre conventions are, in fact, just the kind of question that 'theory' is often used helpfully to discuss.

The result of this is a good deal of historical positivism. Hurlock frequently describes what 'medieval people' thought, about the senses, colour and so forth, often without citation, relying on modern secondary texts or quoting Aristotle or St Augustine as if this could be taken as a reliable guide to the subjective experience of individual pilgrims. But what are the sources that tell us what medieval Welsh pilgrims felt or thought? Is it possible that the touch of a relic felt quite different to different people, or that how it felt was shrouded in mystery even to them? Did anybody write that touching a relic was intended to 'authenticate' the journey, as she claims, and not simply to follow custom, say, or to avoid censure? As so often in the discussion of 'experience', the subjective is left out.

This positivism particularly concerns the answer to 'why' questions. Historical motivation is difficult to recover - just because a new relic won a queue of pilgrims and enlarged income does not entail that it was purchased for that purpose. What of personal piety, or guilt, or custom, or desire for beauty, or internal chapter politics, or ideas of propriety, or expectations for the behaviour of medieval abbots, or countless other reasons, even those unknown to the purchaser, that are lost in the historical record? Chapter 2, for example, concerns the motivations for creating a pilgrimage destination and Hurlock imports uncritically the language of modern business: 'competition', 'advertisement', 'promotion' and 'success'. But while it is clear that for her 'success' means numbers and money, we need a much more sensitive cultural history - and a willingness to admit our own ignorance - to figure out what it meant for any individual ecclesiastic.

Hurlock's thematic approach is, I think, successful but it does risk collapsing temporal development and examples from many centuries apart find themselves pushed together. Were ideas of pilgrimage, or even 'authenticity', static throughout the Middle Ages? The book is also troubled by many typos, missing (and misused) words and punctuation, odd grammar and imprecise prose. Nevertheless, I hope it will inspire more theoretically-informed approaches to the subject, looking beyond anthropological or sociological studies of modern societies to the vast array of theoretical approaches available to modern historians.