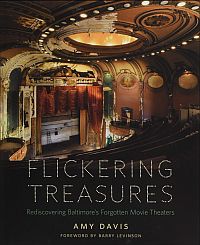 As works by scholars such as Ina Rae Hark, Robert C. Allen or Kathryn Fuller-Seeley indicate, research on American film and cinema has increasingly paid attention to places and spaces of film exhibition and other aspects related to the film or cinema experience. [1] Works like these tend to be interdisciplinary in nature and at the intersection of, for example, film and cinema history, cultural, architectural, urban and social history. Consequently, the architectural structure of movie theaters is also in focus, as well as the theaters' entanglements with their neighborhoods and communities and questions such as what it means to watch movies for people, in particular communities and points in time. Amy Davis' book Flickering Treasures: Rediscovering Baltimore's Forgotten Movie Theaters can be seen in this context.

Davis is an award-winning Baltimore Sun photojournalist, whose 2008 Baltimore Sun photo essay on forgotten movie houses provided the starting point for her book. In eight chapters, each devoted to a different period of Baltimore's movie theater history, Davis chronicles the rise, development, decay, destruction and preservation of Baltimore's downtown and neighborhood movie theaters, starting off with the arrival of the first moving images in Baltimore in 1896 and ending in 2017. Not unlike the modus operandi of New Cinema History, Davis' book does not primarily revolve around the actual moving images, i.e., what was shown, but is rather interested in where films were shown.

Davis presents to the reader numerous places of film exhibition: downtown and in the neighborhoods, movie palaces, amusement parks, storefront theaters or even churches. While doing so, she highlights the different architectural styles and particularities of Baltimore's many theaters, e.g., Stanley's (1927-1965) impressive white, marble Romanesque fa&#231ade (177), the Auditorium's/Mayfair's (1904-1986) beautiful Beaux-Arts fa&#231ade (8), the <i>New's</i> (1910-1986) neoclassical interior (50), the <i>Senator</i> (1939) as an example of a Streamline Moderne theater (217), and the African American <i>Royal</i>, and brings to our attention renowned and/or local architects such as Thomas W. Lamb or E. Bernard Evander. <i>Flickering Treasures</i> ties these aspects with a large number of other elements that contributed to the success or failure of particular theaters such as their size, the ability to cater to the patrons' needs or desires (air conditioning was, e.g., a factor that contributed to a theater's success in a place like Baltimore, which tends to get rather hot during summer), or presence of stars such as Jimmy Stewart, Frank Capra, Ella Fitzgerald, Cab Calloway and others. Thus, Davis shows in her book that the history of Baltimore's theaters is inextricably linked with numerous factors, and how, for example, the socioeconomic situation of particular neighborhoods, migration, racism and segregation contributed to the success or failure of Baltimore's theaters. </p> <p>The strength of <i>Flickering Treasures</i> lies in the numerous photographs that take center stage in this book in which she juxtaposes numerous vintage with her own artful photographs in order to procure a "dialogue with the past, not its replication" (xiii). Consequently, her book does not merely document how numerous movie theaters became stores, office buildings, churches or were taken over by nature. Instead, the photographs create a compelling story that highlights that the history of Baltimore's forgotten movie theaters is also about transformations, opportunity, loss and lack of (architectural) preservation or neglect. One main question <i>Flickering Treasures</i> seems to ask is why a city that in 1916 had 129 movie theaters merely had eight left by the year 2000, while pointing to the consequences for the city's populace, neighborhoods and landscape. The culprits for the disappearance of Baltimore's movie theaters are numerous, and include the usual suspects such as the rise of TV and the dying of neighborhoods. Davis seems to suggest that the developments documented in her book are indicative not only of Baltimore's neglect of its cinematic cultural and urban history, but also of its urban landscape and citizens. However, <i>Flickering Treasures</i> does not primarily mourn the past or what could have been. Instead, it seems that Davis hopes that by showing the positive effects that movie theaters once had on their neighborhoods and communities and continue to have due to preservation and reconstruction, her book "will spark a dialogue about how we can transform more of our forgotten theaters into catalysts for building thriving communities" (290). </p> <p>For <i>Flickering Treasures</i>, Davis resorted to a vast array of material that she found in newspapers and archives, which she combined with numerous personal accounts and anecdotes by Baltimoreans from diverse walks of life, including personalities such as filmmaker and artist John Waters Jr or Academy Award-winner Barry Levinson, director of films such as <i>Good Morning Vietnam</i> (1987), <i>Wag the Dog</i> (1997) and <i>Rain Man</i> (1988). However, as a photojournalist, Davis produced a photo-documentary, rather than an academic book in the strictest sense. Consequently, Davis primarily refers to Robert K. Headley's <i>Motion Picture Exhibition. An Illustrated History and Directory of Theaters, 1895-2004</i> (2006) and his earlier self-published <i>Exit</i> (1974) instead of discussing numerous academic or semi-academic publications on the subject. [<a href="#fn2" name="fna2">2</a>] This makes her book an interesting read for non-academics interested in a brief introduction to Baltimore's movie going and theater history. At the same time, for scholars interested in, e.g., cinema, exhibition, urban, cultural or art history, <i>Flickering Treasures</i> can be seen (because it is decidedly dedicated to Baltimore) as a compelling addition to works such as <i>Exhibition, The Film Reader</i> (2002), <i>Hollywood in the Neighborhood. Historical Case Studies of Local Moviegoing</i> (2008) or local history projects such as David M. Guss' "Lost Theatres of Somerville" (2006) and as providing a great starting point for future research. [<a href="#fn3" name="fna3">3</a>]</p> <p><br /><span class="underline">Notes</span>:</p> <p>[<a href="#fna1" name="fn1">1</a>] See e.g.: Robert C. Allen: Getting to Going to the Show, reprint in: Locating the Moving Image: New Approaches to Film and Place, ed. by Julia Hallam / Les Roberts, Bloomington 2014; and Going to the Show, available under: <a href="http://gtts.oasis.unc.edu" target="_blank">http://gtts.oasis.unc.edu</a> (accessed 01 March 2020); Ina Rae Hark:&#160;Exhibition, The Film Reader, London 2002; Kathryn Fuller-Seeley (ed.):&#160;Hollywood in the Neighborhood. Historical Case Studies of Local Moviegoing, Berkeley 2008.</p> <p>[<a href="#fna2" name="fn2">2</a>] Robert K. Headley:&#160;Motion Picture Exhibition in Washington, D.C. An Illustrated History of Parlors, Palaces, and Multiplexes in the Metropolitan Area, 1894-1997, Jefferson, N.C. 1999; and Robert K. Headley:&#160;Exit. A History of Movies in Baltimore University Park, Md 1974.</p> <p>[<a href="#fna3" name="fn3">3</a>] David M. Guss: Lost Theatres of Somerville, in:&#160;Marquee&#160;1 (2006), 3-16; and: Lost Theatres of Somerville, available under: <a href="http://www.losttheatres.org/theaters.htm" target="_blank">http://www.losttheatres.org/theaters.htm</a> (accessed 01 March 2020).</p> <p class="italic" style="text-align: right">Susana Rocha Teixeira</p> </div> </div> </div> <div id="page_footer"> <div class="ie6_font_size" id="separator"></div> <p>issn 1618-6168 / www.sehepunkte.de <img height="10" src="/images/sp10.jpg" width="10"> </p> </div> </div> </body> </html>