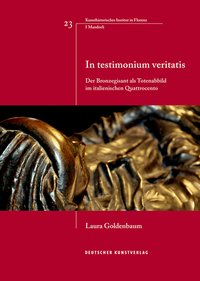 This is an ambitious and well-researched book that draws important attention to a compelling topic: the bronze effigies of the Italian Quattrocento. The number of surviving examples is admittedly modest - only nine are known, four of which are in low relief and five almost fully in the round - but together they form a surprisingly coherent group. In her innovative study, Laura Goldenbaum sets out not only to draw renewed attention to these sculptures but also to establish a discourse of bronze casting that centers on the technical, artistic, and theoretical potential of the material itself. To achieve this goal, she beautifully weaves together ideas from three distinct but intertwined sets of sources: the rhetoric associated with bronze in late medieval and early modern texts, the work of bronze-casting as an equally potent carrier of meaning, and the activities of the powerful men whose bronze effigies are still extant. The methodological interventions made by juxtaposing these different sources have opened many fresh insights into the monuments at hand; this is an impressive tome that should be required reading for anyone engaging with the material turn in early modern art history.

The book is organized into six chapters. The first is an introduction that posits bronze effigies as a discrete tradition, distinct from its counterparts in stone; the second is an overview of earlier bronze effigies from the eleventh through fourteenth centuries. The book hits its stride in the third, fourth, and fifth chapters; these sections form the heart of the study and move through its nine central examples in mostly chronological order. Chapter 3 treats the low-relief examples as a distinct group; they include the effigies of Fra Leonardo Dati (d. 1425) in Santa Maria Novella, Florence; Giovanni Pecci (d. 1427) in Siena Cathedral; Pope Martin V (d. 1431) in San Giovanni in Laterano, Rome; and Francesco Sansoni (d. 1499) in Santa Croce, Florence. Chapter 4 turns to the effigies of Baldassare Coscia (d. 1419) in the Florence Baptistery and Mariano Sozzini (d. 1467), now in the Bargello; chapter 5 is concerned with the effigies of Pope Sixtus IV (d. 1484) and Pope Innocent VIII (d. 1492), both in St. Peter's Basilica, Vatican City; and Cardinal Pietro Foscari (d. 1485), Santa Maria del Popolo, Rome. These case studies are individually rich and rewarding. Of particular note are the ideas drawn from recent conservation projects and related technical studies; these findings have been insightfully linked to archival evidence that situates each example within a broader historical context. The author's own work in directing a 2011 technical examination of the formerly less-well-studied Sozzini effigy deserves special mention here as yielding a significant set of discoveries about methods of casting and constructing bronze effigies. Chapter 6 offers a thoughtful conclusion and completes the book with a concise summary in both German and English.

Taken together, chapters 3-5 offer a convincing new perspective on bronze effigies in the orbit of Florence, Siena, and Rome in the fifteenth century. Though few in number, these effigies offer a remarkable corpus; it is striking that all were made for high-ranking churchmen: clerics, generals of monastic orders, bishops, cardinals, popes and members of papal circles. The bronze material is not only expensive and prestigious; its casting allowed for the incorporation of death masks and other direct transfers of form from the body that are not possible in other media - a particular advantage over the use of stone. Quattrocento bronze effigies thus echoed the strategies of wax votives, which were omnipresent in Florentine churches and shared an emphasis on lifelike faces and hands that seemed to relay the presence of the absent deceased. Goldenbaum coins the term Realdefinit-Method to describe the casting processes in which the body itself was used as a kind of matrix in the production of molds and sculptures; the ensuing tensions of replication articulate a metaphysics of creation that early modern artists, characterized by their heady enthusiasm for experimentation, were happy to exploit. The result is a series of bronze sculptures that share an uncanny relationship to the lost bodies of the dead; the technical process of remaking bodily forms is readily linked to the regenerative process of resurrection itself. Goldenbaum admirably balances these theoretical questions with a clear focus on the effigies themselves; she paints the individuals they represent as active social, political, and cultural agents, vividly portrayed within the complex frameworks of their time.

The book, however, is not without one key problem: it falters in its attempt to extend a paradigm of the bronze effigy beyond its central focus on Renaissance Italy. The underlying desire to trace early modern developments back to the medieval past is admirable, but the foundational premise - that, lacking a tradition of Italian effigies before 1280, and Italian bronze effigies before 1400, we must turn to the medieval North for sources - is fatally flawed. To be sure, textual sources about bronze offer a shared tradition that stretches far beyond narrow geographic and temporal boundaries, and this provides a useful apparatus for approaching a discourse that stretched across premodern Europe. Nevertheless, it remains difficult to believe that bronzes cast by Donatello and his contemporaries shared much with antecedents in the distant cathedrals of Merseburg and Augsburg - perhaps such a link might be justified in the bird's-eye-view of Erwin Panofsky's Tomb Sculpture [1] and similar surveys, but in a highly focused study like this it is too great of a detour to summarize a large corpus of medieval monuments in Chapter 2. Conversely, the book makes no mention of northern bronzes that were actually contemporary to the material at the heart of the book. Perhaps most glaring, the Flemish brasses are wholly ignored, despite the lively exchange that went on between the two great centers of Florence and Bruges in this era. True, those incised brasses are fundamentally different from sculptural effigies - but in a book that pays such close attention to relationships between material, technique, form, and meaning, they could have offered a compelling counterexample to help elucidate distinctions between various levels of plasticity that are vitally important for the author's central arguments.

Even without the brasses, Goldenbaum articulates key distinctions between monuments in low and high relief: still it remains an open question whether these differences in sculptural depth are best attributed to symbolic or pragmatic concerns. Treating the low-relief effigies separately in Chapter 3 is a welcome intervention in many ways, as it highlights their distinct visual qualities. What makes the strategy less than fully convincing, however, is that the final example - the very interesting Sansoni monument - post-dates the other effigies in that chapter by more than fifty years. This presents an organizational snarl, as Sansoni's effigy seems to deliberately interrupt a logical flow from Giovanni Pecci and Martin V to Baldassare Coscia, all three associated with Donatello. Perhaps the intent was to avoid an overemphasis on the activities of the best-known fifteenth-century artist working in bronze, which would be welcome in itself, but the result is a rather confusing chronological trajectory that only made this reader question the core contention that low-relief effigies were all that easily separated from their high-relief counterparts. It is hard to imagine the makers of the Sansoni effigy looking solely to precedents in low relief, without at least an equal interest in the effigies addressed afterwards in Chapters 4 and 5. Perhaps the use of shallow relief was more often a reflection of that much more mundane consideration: the cost of procuring a large amount of bronze to honor the dead. This would align well with the author's own suggestion that the famous Pecci tomb may well have been cast as much as a decade after it was first modeled in wax. Even for the wealthy and well-connected, a full-scale effigy in bronze was a considerable expense, no matter how ingeniously the artist compressed its shallow forms.

These objections, however, are only small quibbles compared to the overall contribution of this book. The author is to be commended for her rigorous attention to bronze, its physical forms and metaphysical meanings, and its remarkable technical innovations in Renaissance Italy. The book is richly illustrated, thoroughly annotated, and beautifully produced; it offers an impressive and greatly welcome addition to our knowledge of tomb sculpture in the premodern world.