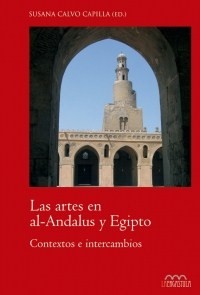 This monograph constitutes the second volume of the collection Arte y Contextos and contains part of the results of the research project Al-Andalus, los Reinos Hipanos y Egipto: arte, poder y conocimiento en el Mediterráneo medieval. Las redes de intercambio y su impacto en la cultura visual. The main aim of this project, directed by Susana Calvo Capilla and Juan Carlos Ruiz Souza, was to explore in detail the cultural and artistic connections developed between al-Andalus, the Hispanic Kingdoms and Egypt during the Middle Ages. One particular objective was to analyse the impact of the exchange networks established between these territories in social, cultural and artistic terms, in order to better understand the definition of the Mediterranean cultures and their identity values.

Susana Calvo, editor of this volume and co-director of the aforementioned project, presents an overview of the project and the main results achieved. In doing so, she highlights the diversity of viewpoints adopted to address the artistic and cultural relations between al-Andalus and Egypt. This is accomplished thanks to a group of specialists able to offer a prismatic and plural vision of the Mediterranean culture in the Middle Ages. Only through a solid and multidisciplinary frame like this could such a wide range of buildings, objects, epigraphic material and sumptuary arts - metals, ceramics, textiles, glass and others - be suitably studied. This constitutes one of the main values of this contribution, as this is the first time that so many authors from so many disciplines converge in exploring the links, influences and relationships between these two Mediterranean areas in Medieval times.

Rafael Azuar, Azucena Hernández and Francisco Hernández reflect on diverse metal crafts. Azuar focuses on the so-called Islamic bronzes from Denia, carefully reassessing the former classification of this collection of 82 bronze items and suggesting new typologies and filiations. According to the author's new approach, around the 80% of these pieces have Fatimid origins and come not only from Egypt, but from other spots in the Mediterranean under Fatimid influence. Azucena Hernández writes about astrolabes in al-Andalus and Egypt, highlighting the cross-references between both territories. These scientific instruments are not only considered here because of their aesthetic or physical values, but as evidence of the exchange of knowledge and scientific advances. Francisco Hernández reports on several sumptuary objects - some of them belonging today to the collection of the Instituto Valencia de Don Juan in Madrid - traditionally believed to have Nasrid origins. This comparative analysis allows to think otherwise and suggests that they could have been made in Mamluk Egypt.

Pottery and glass also have specific weight in this monograph. Lustre ceramics are addressed by Anja Heidenreich and Carmen Barceló, who highlight the need to approach this archaeological material. Specifically, the in-depth study of certain pieces found in the Taifa of Seville confirms that not all of them were imported, as there were local productions in this Taifa as early as in the 11th century. Danièle Foy develops the topic of glass in furniture and architectural decoration through the examples documented in Sabra al-Mansuriya (Tunis) and Fustat (Egypt). Overcoming the problems of former inexact dating, Foy explores the composition, production techniques, typologies and uses, places of production and chromatic experiences generated by the use of glass.

The exchange of objects and influences between these regions is fully exemplified by luxury products. Thus, Laura Rodríguez addresses textiles, a key material to understanding the complex importation and exportation networks among kingdoms and states, their protocols, and their role as proof and symbol of social status and belonging beyond borders. Noelia Silva writes about ivory production, which also reflects the intense circulation of material between al-Andalus, Egypt and the North of Africa. Through two particular sets of objects -Fatimid painted chests and carved pyxides - the author explores these interrelations and the transmissions of techniques and designs which contributed to create a Mediterranean artistic dialogue.

Many of the objects previously mentioned were decorated with calligraphy, a major art form in Islam. José Miguel Puerta introduces to its masters through the hand of Ibn Jaldun. This approach reveals the importance of calligraphy, reflected in specific treatises and exposed in sumptuary objects such as cards, sacred books, lamps, and jars; and in monumental architecture through epigraphy.

Finally, some architectural features related to power are studied by Antonio Almagro, who brings the example of the Sa'adi al-Badi palace in Marrakech, and Juan Carlos Ruiz Souza, who reflects on the architecture of power with special focus on funerary qubbas and their ornamental programs. Both contributions explore the influences that might have inspired the architectural and decorative configuration of the complexes analysed, and through which further cultural and architectural roots can be suggested. These works show formal links between al-Andalus, Egypt and the North of Africa, as well as influences, emulations and trends, some of them considered very prestigious and therefore widespread through the Mediterranean.

Very successfully, this volume presents a vivid reconstruction of the historical and cultural contexts beyond the simple narration of facts, which was a key aim of this research project. The topics and materials included show the intensity and continuity of the relationships between the Iberian Peninsula and Egypt during the Middle Ages, reminding that this geographical space was once a contacting point for different cultures and social groups and contributed to create a shared identity. The collection as a whole overcomes traditional standpoints, sometimes very limiting, and offers a wide chronological frame. In this regard, the special attention paid to Mamluk Cairo is certainly very interesting, as it shows that the cultural and artistic relations between al-Andalus and Egypt went beyond the conflict with the Fatimid caliphate, contributing to enrich and complete some current historiographical approaches.

All this contributes to a more accurate depiction of the bridges and relations formerly established between these two shores of the Mediterranean, and invites us to go beyond contemporary barriers and borders to understand the former complexities that defined, connected and somehow united this whole area. To finish, this volume has a very attractive design, with full colour and high definition plates on high quality paper, which facilitates its reading and allows for the appreciation of details. The great variety of disciplines, viewpoints and subjects developed will interest a wide number of readers from different fields.