Sabine R. Huebner: Papyri and the Social World of the New Testament 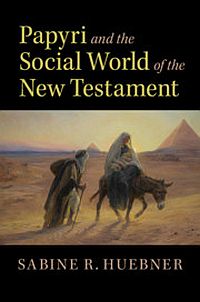 The value of documentary papyri for the interpretation of early Christian texts was recognized as soon as they began to be discovered and published. Adolf Deissmann's Licht vom Osten (Tübingen 1908) was a wide-ranging study that culled data from newly published papyri and inscriptions, underscoring their utility for lexicography and a for understanding variety of social, and economic aspects of Mediterranean antiquity. Much more recently, G.H.R. Horsley, S.R. Llewelyn, and J.R. Harrison have continued Deissmann's project in their review of newly discovered (or republished) inscriptions and papyri under the title New Documents Illustrating Early Christianity (1981- ), collecting items relevant to the language, history, and culture of early Christianity. Even more recent is the inauguration of the Papyrologische Kommentare zum Neuen Testament, edited by Peter Arzt-Grabner (Göttingen 2003- ), which draws upon papyrological resources to comment on each book the New Testament.

Sabine Huebner's monograph is not a comprehensive survey of papyrology but instead offers several probes that underscore the ways that papyrus texts change and nuance the understanding of the New Testament. Chap. 2 discusses the identity of the first readers of the New Testament through the lens of P.Bas. II 43 (ca. 230 CE), the oldest Christian private letter to date. This letter shows that members of a Christian family in Theadelphia belonged to the curial class and one even served as a city counsellor, probably in Arsinoe/Ptolemais Euergetis. This is coheres with other evidence from the Severan period (e.g., I.Klaudiu Polis 44, Klaudiopolis, III CE, in which a Christian served in all of the civic magistracies) and with SB XVI 12497 (Theadelphia, 253 CE) in which a Christian appears on a list of nominees for liturgies. These data cast a different light on a standard narrative, according to which Christians were typically among the very poor. That might have been the case early on, but these texts indicate that well before Constantine some Christians were much more highly placed.

Chap. 3 raises the classic problem of the discrepancy between Matthew and Luke's infancy accounts, the former dating Jesus' birth to the latter years of the reign of Herod the Great (d. 4 BCE) and Luke to the time of Quirinius' census of Judaea at the time of its reduction to the status of a province (6 CE). Matthew locates Joseph in Bethlehem but Luke, who apparently concludes that Jesus' father, like Jesus, was from Nazareth, has Joseph travel to Bethlehem in order to be enrolled. Huebner proposes to solve this aporia by invoking P.Lond. III 904 (104 CE), in which a governor ordered those temporarily away from their place of registration to return home for the purpose of a census. But since P.Lond. III 904 concerns only those temporarily away from home (ἀποδημεῖν), she has to rely on John Chrysostom's explanation, who (implausibly) conjectured that Joseph must have owned property in Bethlehem - implausible, since Luke, who has Jesus born in a cave or stable, offers no hint that Joseph was a landowner there. Huebner also conjectures that Quirinius might have been a procurator under Saturninus, governor of Syria from 9-6 BCE. These seem heroic efforts to rescue Luke from an error. If this were the only chronological (and geographical) gaff that Luke made, it might be plausible; but it is not. It would seem better simply to conclude that he was mistaken about the date of Jesus' birth. To be fair, however, Huebner is not defending the historicity of Luke's account, only that Luke knew enough about census practices to create a generally credible story.

Chap. 4 offers lucid discussion of the evidence for women in Egyptian Christianity (chap. 4) with special attention to the Greek fragments of the Gospel of Mary (P.Oxy. L 3525; P.Ryl. III 463). Although papyrus evidence indicates that women were not among the clerical ranks, there were plenty of Egyptian monastics. Moreover, the Gospel of Mary, which offers a notable example of a woman as a teacher, ranking with the other apostles, might be evidence of a counter-narrative among rural Egyptians that promoted more prominent roles for women. Other chapters discuss the social status, family size, and literacy levels of artisans (chap. 5); travel, including many valuable observations on the pace and price of travel, and hazards to travel (chap. 6), and labour on the margins of society, illustrating this with shepherds (chap. 7).

Papyri and the Social world of the New Testament is beautifully illustrated with images of several papyri and offers an excellent introduction to the many insights that Egyptian papyri have to offer.