Walter D. Ward: Near Eastern Cities from Alexander to the Successors of Muhammad 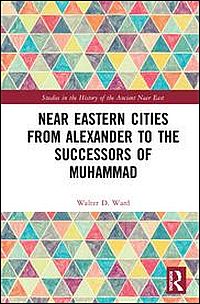 Near Eastern Cities is a history of urban spaces and structures in the Levant (but not Mesopotamia) from the Hellenistic period to late antiquity. It anticipates a wide readership, including non-specialists and students initiating research. Its aim is to analyze urban transformations over a vast expanse of time, while also accounting for contextual differences. To this end, it traces the material histories of eight cities: Antioch, Apamea, Gerasa, Scythopolis, Jerusalem, Caesarea Maritima, Petra, and Palmyra. Archaeologists have worked extensively at most of these, though excavations at Antioch have been more limited.

The introduction (Chapter 1) starts briefly with the destruction that ISIS inflicted on the Temple of Baal-shamin, the Temple of Bel, and other buildings at Palmyra in recent years. It then summarizes the history of urbanism in the Near East, with the following emphases. Seleucid kings founded cities as population and logistical centers, but under Roman governance they peaked as monumental spaces. With Christianity came churches, and the Arab conquests brought mosques (though churches persisted). The chapter closes by addressing recent debates on cultural identities in the Near East and the activity of civic councils (boulai) under Roman rule, before providing a geographic description of the Near East.

Chapter 2 introduces the standard material features of cities. Briefly reminding us that they were populated by noises, smells, and perishable materials that ruins rarely preserve, it highlights how existing remains tend to illuminate the Roman period, along with late antique churches. The structures left from that period's intensive building often impede work on Hellenistic contexts. Only rarely have (western) archaeologists gravitated toward the Islamic period. The bulk of the chapter summarizes common urban features: grid plans, the fixtures of colonnaded streets, civic and commercial spaces, buildings for entertainment and leisure, houses, temples, and eventually churches and mosques.

The book's core (Chapters 3-6) provides urban histories of cities, organized as dyads. Despite their different trajectories, these cities were located at sites of settled populations during the Hellenistic period, witnessed a monumental peak or radical realignment under the Romans or their clients, and persisted as population and industrial centers in late antiquity. Chapter 3 (55-92) focuses on two cities of the north Syrian "Tetrapolis" established by Seleucid monarchs and vital to Roman governance: Antioch and Apamea. Chapter 4 (93-135) explores two cities of the south Levantine "Decapolis": Gerasa and Scythopolis. Chapter 5 (136-78) addresses the jewels of greater Judaea: Jerusalem and Caesarea Maritima. Chapter 6 (178-225) captures two marvelous cities of the "desert fringe" founded along a wadi and settled by nomadic populations: Petra and Palmyra.

Each chapter ends with a brief synthesis, as does the book (Chapter 7). The syntheses yield interesting conclusions, even if some are expected. Though longstanding trends had major impact, key events did sometimes determine urban histories (232). Grid plans reflected the acts of Hellenistic founders (227). The Romans' garrisoning and refoundation of Jerusalem as Aelia Capitolina defined its trajectory for centuries (175, 227). The natural catastrophes of the 6th-8th centuries initiated declines in population, production, and monumentality in some cities (89, 131-32). With Antioch excepted, most major building and urban planning was organized by Roman-period civic councilors; in late antiquity, imperial authorities or bishops played more pivotal roles (89-91, 132-34, 228-29). Beyond Caesarea (176, 229), the Islamic conquests did not impede most later Roman trends, which involved municipal spaces and buildings being populated by houses, shops, or industrial activity (229-31).

The book, rich in illustrations and imparting good histories over a vast period, is a useful resource for non-specialists or students initiating research. Various aspects benefit specialists too. The coverage of Petra and other south Levantine cities is uniquely strong (perhaps reflecting the author's core expertise). Even so, there are limitations and missed opportunities. Foregoing footnotes (understandably), the chapters' have very short bibliographies that omit much recent scholarship useful for beginning researchers. [1] This is a pity since readers could compensate for errors and omissions, usually small, by consulting these other texts. The narrative treats "Antioch on the Orontes" as the dominant ancient name, while mentioning that "Antioch near Daphne" saw occasional usage (59). In truth, Antioch's coins and inscriptions often refer to "the Antiochenes near Daphne," never Antioch on the Orontes. [2] The book seems to treat the two adyta of Palmyra's Temple of Bel as built in 32 CE and intended for two cults at the time (203). Yet, excavators have argued that only the south adyton was built in 32 CE and that the north one was produced decades later. [3] Given the small amount of surviving Hellenistic remains, the book oddly never mentions what the few Seleucid settlements with some such material (like Jebel Khalid and Dura-Europos) may or may not tell us about the cities covered.

Also, the publishers should have provided more support in editing and should have rewarded the author's efforts to secure good illustrations by printing them to optimal effect. Some plans (like 6.9, 611, and 6.13) are too small to read. Urban structures or spaces treated in detail are sometimes absent from corresponding plans (for example, the discussion of Roman-period Jerusalem on 152). [4] The prose uses sections A, B, and C of Palmyra's Great Colonnade as points of orientation (205), and mistakes A for C, before introducing what these sections were (207). Herod I appears as a "profligate builder" (136).

I do not want to end on a negative note. The author has undertaken a challenging task and provides a real service to researchers, teachers, and students alike. The book has admirable qualities, and it is worth assigning. But there are ways to improve it for use by non-specialists and newcomers to the field. I will look forward to future editions if the author and the publishers embark on this task.

[4] In a development too recent to be addressed by the book, excavators now believe that Aelia Capitolina did not have circuit walls long before the 5th century. Shlomit Weksler-Bdolah, Aelia Capitolina-Jerusalem in the Roman Period in Light of Archaeological Research (Leiden: Brill, 2020), 60, 138-39.