Alessandro Stanziani: Labor on the Fringes of Empire 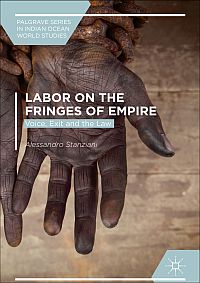 This fine monograph by the prolific and erudite professor at Ècole des hautes études en science sociales Alessandro Stanziani sets out to demolish the idea of a neat transition from slavery to free labour during the nineteenth and early twentieth centuries. Instead, Stanziani convincingly argues that "even after slavery was officially ended, the world of labor continued to be a world of unequal and sometimes extreme exploitation and violence" (3). He finds this inequality, exploitation and violence in particular by looking at colonial, regional and local practices. This book, then, is a case for looking at specific places when studying the history of labour and coercion. This spatial and contextual approach proves to be a very fruitful one. The precise places Stanziani has opted to investigate here are all located around or in what is called The Indian Ocean World (IOW).

The book consists of seven chapters, and, apart from the introductory chapter, a very instructive second chapter on theories of labour and coercion, and a conclusion, each one is rooted in a specific place. Chapter 3 deals with India, exploring changing British's views towards Indian "slavery" and abolition, as well as the continued practice of using violence to coerce workers. Stanziani particularly examines indigo cultivation in Bengal and tea production in Assam to make his point here. Despite differences, indigo being produced by smaller producers and tea on big plantations, in both cases workers experienced legal and physical coercion. In fact, Stanziani here argues that coercion through the law and the physical coercion worked to reinforce each other. The same connection Stanziani has found in many of the places he investigates in this book.

In chapter 4, we move across The Indian Ocean to what after 1815 became the British colony of Mauritius. Between 1834, when slavery was officially abolished, and 1910, 450,000 indentured servants arrived in Mauritius, mostly from India and Madagascar. After scrutinizing living conditions on individual plantations, Stanziani demonstrate that, although the workers were contractual labour, in practice coercion continued after 1834. Workers were subject to planters' abuse and had few rights in law, although there were improvements over time, particularly after the 1860s.

Chapter 5 and 6 investigates French attitudes towards slavery from the eighteenth to the early twentieth centuries and two French colonies, Réunion Island and French Equatorial Africa (FEA) respectively. In both places, as with India and Mauritius, there was no clear-cut change from enslaved to free labour, although "slavery" was formally abolished in both places, in Réunion in 1848 and in FEA in 1905. In line with Stanziani's admirable initiative to examine not only connections but also the specific contexts of a specific place, he, among a number of interesting findings, shows how, on Réunion weather was linked with dependency and labour as cyclones not only destroyed plantations, i.e., many labourers' place for working and living, but also impacted on food security through insufficient food imports and on the social hierarchy (209-17).

In chapter 6 we move up in time, to the late nineteenth and early twentieth centuries, to find how workers in France were given rights and protection while the colonial worker was excluded from that emerging welfare state, to the extent that the welfare state was built on this exclusion. Stanziani reveals how the French in FEA continued to use violence to exert labour, how planters continued to justify that use into the twentieth century and how the legal inequality between employer and worker continued.

Despite Stanziani's interest in specific places, as seen in the summary of the chapters above, Labor on the Fringes of Empire is also very much a book that seeks to connect those places to a wider world and to their regional contexts. As such, the book fits well into the ongoing trend favouring a global approach to historical phenomena. For Stanziani, this is partly a matter of looking at connections big and small. Partly it is also a matter of taking a relational perspective to labor itself by assuming that so-called "free" forms of labor and bondage were defined and practiced in relation to each other, not only within each country and region, but also on a global scale." (3) In this, he largely succeeds.

Although he does succeed in not taking an Atlantic approach to the subject of labour, Stanziani's laudable attempt to move away from a Eurocentric perspective on abolition, however, is less successful. Take the choice of places he investigates, for example. These are all largely based on the colonial states that emerged after European colonization, although he does pay attention to practices before colonization as well as the state-building processes themselves. Furthermore, the empires he studies are the already heavily researched and compared Britain and France, although Stanziani must be applauded for some enlightening findings here. Non-European states do feature, but they could have been given more attention in order to move away from the Western perspective. The concept of empire itself remains largely unexplored, despite appearing in the title.

More regretfully, the people we meet by name are almost exclusively Europeans. I have only found people from the IOW area referred to by name one time, in a table on the days worked on a specific estate in 1871 (table 4.5: 159). This omission might be connected with a further issue: the type of worker that is dealt with. The worker that is presented in this book is in certain respects a somewhat nebulous subject. Although Stanziani is adept at showing us the inequality and violence the nineteenth century worker lived with and under as well how this worker was racialized, the labourer overwhelmingly remains a he. This gendering is not reflected on, and mostly we simply do not know the sex of the worker. At times this oversight leads to odd phrases, such as when Stanziani writes about how "[p]hysical violence and abuse of Indian workers and women were part of everyday life" at indigo plantations in Bengal (104, my emphasis). Does this mean that only the men worked? We do not know because he does not tell us.

The subtitle of the book is Voice, Exit and the Law, where "voice" and "exit" refer to concepts proposed by Hirschman (40). Stanziani skillfully shows us the connections between the three and is especially successful in revealing how the law created and upheld inequalities. Furthermore, he shows how there is no opposition between contract and status. The concept of "voice", however, remains confusing as Stanziani both seems to argue that workers had no voice (41) and that their voice had less "weight" than their masters' voice (166), presupposing the existence of such a voice.

These objections, however, does not negate that Labour on the Fringes of Empire deserves a large readership. After reading this book, no-one should linger under the misapprehension that legal acts abolishing slavery makes away with coerced labour and violence towards workers. Neither should one assume that labour history of the nineteenth century is a European or Atlantic phenomenon.