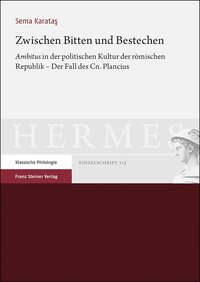 Rome, August-September 54 BCE. A 52-year-old man, clad in his toga, takes the stage in the middle of a court of justice, surrounded by judges, the two parties of the trial and the audience. The previous day, the great Hortensius had spoken; now Cicero was ready to defend Cn. Plancius, a homo novus, the son of an influential publicanus, who had been elected aedile in 55. One of his defeated competitors, M. Iuventius Laterensis, of consular ancestors on both sides of his family, had accused Plancius of electoral misconduct under the lex Licinia de sodaliciis, which had been passed by consul Crassus in 55. The law reflected the relationship between ambitus and vis, and between sodalitates and electoral misconduct. Cicero challenged Laterensis to prove that "Plancius had divided, enrolled, served as depository of bribes, made promises, divided up [the tribe members]" (Cic. Planc. 45: haec doce, haec profer, huc incumbe, Laterensis, decuriasse Plancium, conscripsisse, sequestrem fuisse, pronuntiasse, divisisse); such were the terms of the accusation.

If Cicero had not defended Plancius, or if the speech had not survived, we would not be informed about the existence of a lex regarding sodalitates and elections in 55. This supposition shows how thin is our knowledge of the Roman Republic, even of periods for which sources are not scarce. It is daunting to ponder that we may have probably no idea and no mention about laws passed during the first century BCE. But we, as historians, have to work with what we got and thus we must squeeze the sources as much as possible; this is what Karataş has done. In fact, she provides us with two studies for the price of one: a study of the lex Licinia de sodaliciis and a historical commentary of Pro Plancio.

Karataş has a wider perspective of ambitus, which goes beyond mere electoral corruption; in her view, ambitus, an instrument of political struggle and the search for honours, described practices which moved in a spectrum of legal and illegal, or moral and unmoral. Spectrum is a key word in Karataş's argument.

After an introduction, chapter II studies the definition of ambitus and surveys the laws against ambitus from 432 to 67 BCE, followed by an in-depth study of Sulpicius Rufus' proposal of 63 and the lex Tullia de ambitu of the same year. Ancient etymologies are not helpful to seize the matter, since they defined ambition, but not ambitus. In Karataş's view, the frequency of laws against ambitus does not attest only of the persistence of the problem, but also the changing perceptions and perspectives of ambitus.

Chapter III analyses the lex Licinia de sodaliciis. Karataş ponders who formed the jury of the quaestio extraordinaria de sodaliciis, since the sources mention that they were drawn ex omni populo. She suggests that they were not senators, but mainly equites and tribuni aerarii. The changes in the composition of juries throughout Republican history are discussed in the text and represented in a very helpful and illustrative table in pp. 294-295.

Chapter V analyses the link between ambitus and violence; it is remarkable that laws on vis and ambitus are attested on the same year. Karataş ponders the role of collegia and sodalitates in elections in the 50s BCE. The collegia had been forbidden in 64 BCE after cases of violence; they had taken at that moment a politic dimension. Karataş considers the sodalitates as a "hybride Vereinform" and part of new electoral ways; they were more political inclined than collegia and attest of a more complex organization of ambitus.

In the second half of the book, Karataş provides a very detailed historical commentary of the preserved text of the Pro Plancio speech. The commentary illuminates especially all aspects of a petition and of a process of ambitus, including very detailed specifics regarding the organization and logistics of voting in the comitia tributa and centuriata (e.g. 222-224, commenting Planc. 49-50). It also comments in-depth Cicero's Selbstdarstellung (the long oratio pro se in Planc. 72-100), on exil as topos, and on the exempla linked to elections, victories and defeats. The commentary may be consulted independently, since relevant information covered in the first chapters is summarized and referred when necessary.

This book has its origins in a dissertation, what may be glimpsed occasionally. In my opinion, chapter V on ambitus and violence would have worked much better before the study of the lex Licinia in chapter III, providing the general context before the specifics. A brief discussion on the circumstances of the publication and circulation of the Pro Plancio would have also been useful. The bibliography is up to date and includes items in several languages, what should always be praised. [1]

In sum, this book will be useful both for readers looking for a specific point of the Pro Plancio but also for those interested in Roman political life of the 1st century BCE. Although focusing on a single law and a single judicial case, the book makes rightly a point of setting ambitus within the wider context: Karataş argues that there were no alternatives in the struggle for honors and that losers had few other options. Even though, there was no stigma for losers [2], the stakes were too high. Karataş views ambitus not only as an electoral practice, but also as an instrument of control and social "Disziplinierung" (291): the threat of an accusation of ambitus, which even became an electoral weapon, could not be disregarded. In my opinion, the road that Karataş has taken is a very good route to continue thinking about ambitus.