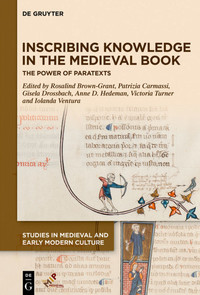 Gérard Genette's theory of the paratext is now so synonymous with manuscript study that one can use the term without needing any additional, substantive explanation as to why it is applicable in that context. Indeed, it is widely accepted as a commonplace tool for analysis that enables codicologists to venture suggestions for how we might understand contemporary textual reception and the remediation of textual culture in the pre-modern period. Most commonly such discussions centre on vernacular, secular texts, probably because Genette's original theory was framed largely around the modern publication of literary texts, but with increasing frequency medieval texts of clerical and even legal import find themselves being viewed through the lens of the paratext.

The volume under review here is a collection of essays ostensibly connected by their attempt to reveal insights into the relative "power" of the paratext, which covers - as the book's editors put it - both "authority" and "power struggle" (5). The book is divided into four sections: 'Constructing Bodies of Knowledge', 'Negotiating Tradition, Creating Practice', 'Framing Knowledge, Empowering Readers', and 'Appropriating Tradition, Expressing Ownership, Embodying the Book'. Each of these has three or four chapters, and there are many full-colour illustrations. Indeed, the entire book is beautifully produced and carefully edited.

The subjects for study across these chapters and sections cover Middle French and Latin texts, and range widely in generic terms from romance to legal to philosophical works, and more, being written by scholars from various disciplines. The editors acknowledge the limitations, even the unsatisfactory nature, of this particular linguistic duet, encouraging future research to sets its parameters more widely (16). Even acknowledging this caveat, though, the reasons for selecting this particular combination of studies are never openly revealed and this begs a question around coherence. If this were presented as conference proceedings or a Festschrift, the lack of clear connections between the contributions would make more sense, but as a pre-designed edited collection, it is trickier to understand. This is not to say, however, that the studies contained within are not valuable in their own right; all are of a good standard, with some exemplary. The editors, too, have made a heroic attempt in the introduction at contextualizing the pieces so that they make sense, both alongside each other and within their respective sections, by providing summaries and commentary so detailed and lengthy that reading the chapters to ascertain the argument is barely necessary. On the one hand, this seems a little like overcompensation, but, on the other, it is reasonably effective in bringing the disparate approaches together.

There is not room to do justice to all of the chapters here, but it is helpful to say a few words about some of the very best contributions, not only to demonstrate that there is clear value in these studies, but also to illustrate their distance from each other. Isabelle Draelants' chapter on the scientific Liber Nomroth de astronomia appears in section 1, placed a little uncomfortably alongside studies of legal texts in which paratexts seem primarily to aid navigation. In Draelants' lively analysis, the paratext - characterized mainly as extensive illustration - is a crucial means by which to understand the text, highlighting vividly word-image relationships and allowing us insight into educational principles of the time.

In section 2, the enlightening study by Hanna Wimmer also considers the relationship of word and image, this time in medieval textbooks on Aristotle. Wimmer explores the tension of the juxtaposition of Christian imagery with Aristotelian philosophy, and thoroughly convinces in her conclusion where she questions whether these would have been reconcilable in the minds of readers. In many respects this chapter would have sat more neatly alongside that of Draelants, being focused on the communication of educational matter. However, it is sandwiched between studies on a medical treatise (by Concetta Pennuto) and legal manuscripts (by Joanna Frońska).

Section 3 turns our attention to the manufacture of manuscripts and is perhaps the most cohesive, containing three chapters, by Anne D. Hedeman, Victoria Turner, and Rosalind Browne-Grant, that focus on works of romance and history (or pseudo-romance/pseudo-history). These work neatly together to discuss and evaluate the various combinations - and the resulting playfulness between reader and author - of text, image, rubric, and prologue, which are to be found not only in the subjects of their analysis but also widely in other vernacular manuscripts. However, the addition of Sinéad O'Sullivan's chapter on the Carolingian reception of Virgil throws out the balance of the section.

Section 4 carries more of a focus on ownership, and its stand-out study for reasons of both depth and detail is that by Outi Merisalo on paratexts in the books of Hartmann Schedel, a fifteenth-century humanist doctor. Here we gain deep, personal insight into the import of the paratext for a particular individual, and as a result, it is perhaps the single most meaningful demonstration of the objectives of the volume, even if Patrizia Carmassi's subsequent broader study of paratextual intentionality is clearly placed as the last chapter precisely to bring the various threads together.

I hope to have made clear that this is a well-produced book, served beautifully by its own paratexts (high quality imagery, notes on editorial principles, a consolidated bibliography, and a usable index), as well as that it is replete with good content. The questions for this reviewer are, first, whether another volume that spends considerable time explaining the paratext, and promoting its use as a legitimate, useful lens through which to understand medieval textuality as the authors do in the introduction (1-4), is actually necessary, or whether we can just accept that paratexts no longer require extra nuance and simply form a normal part of the now more common holistic approach that sees the material object as a whole, rather than fragmented into theoretical parts. Even as a researcher deeply interested in the power of the paratext, I find myself edging towards the latter, whilst also acknowledging that the editors do themselves engage with this debate (4-5).

Second, and perhaps more important, is whether this broad a range of disciplines and text types, combined with only a dual linguistic focus, really come together effectively enough for the volume to achieve its aim of engaging with the notion of "power". There are various orders in which these studies might have been published, but none of them is likely to have changed this impression; the editors' choice works as well as any of the possible options. The only way to evade this critique would have been to commission a series of chapters on more intrinsically connected subjects.

In sum, despite some reservations about coherence and achievement of aims, there is much to enjoy here, and scholars researching paratextual matter in any of the areas mentioned will surely find nuggets of interest.