Przemysław Paweł Grzybowski: The Laughter of Life and Death 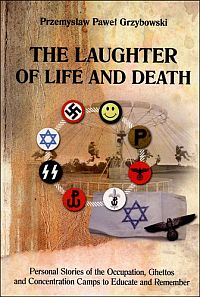 The topic of the Second World War in Poland is widely researched. It is a continual source of inspiration for studies and publications. Nevertheless, here are some lacunae in the historical research on daily life in occupied Poland. One of the issues overlooked by scholars is the role played by humour in the extraordinary wartime circumstances. Presenting and categorising various forms of comicality in the context of its usage is what Przemysław Paweł Grzybowski sets out to accomplish in his book. The work undertaken by Grzybowski is not widely recognised, with a few unconnected, brief publications and case-study monographs available. The topic of humour and comicality during the Holocaust in Poland has appeared incidentally in other Polish monographs regarding daily life during the war, namely in the works of Barbara Engelking, Tomasz Szarota and Joanna Sliwa. [1] Humour has also been studied from a psychological angle, as a form of defence system in response to brutality observed on a daily basis. [2]

Grzybowski divides his book into three parts. It begins with a theoretical chapter providing the framework for studying laughter in times of a wartime social crisis as well as different ways of understanding it. The second part consists of excerpts from memoirs and diaries exemplifying the phenomenon of laughter. The last section of the book comprises contemporary lyrical works that he categorises as comical or humorous. Grzybowski's book was originally written in Polish, though an English version (translated by Agata Cienciała) was published almost simultaneously.

As a person with non-historical training, Grzybowski puts himself in the difficult position of working on a challenging subject, with even more difficult material. He is aware that his study cannot pretend to the level of an interdisciplinary, extensive monograph on the subject of humour. However, self-criticism does not justify the conspicuous shortcomings in the analytical apparatus and rationale behind his work. In his book, Grzybowski aims to lead the narration through the category of the "people of laughter" (65): participants of the wartime events who, despite tremendous circumstances, kept their spirit uplifted through the circulation of jokes, punchlines and repeated songs. However, as the author invokes particular individuals, he does not provide sufficient commentary or more detailed description.

In the first part, Grzybowski presents a succinct analysis on laughter as a sociocultural phenomenon in the context of the constraints imposed by the war. The author refers to a narrow selection of publications mainly from the field of philosophy, with Polish-authored works strongly represented. He outlines the typography of laughter to be supported by the examples provided in the later part of the book.

The following part comprises three main subchapters oriented around general themes: occupation, ghetto and concentration camp. The author focuses on the territory of the General Government, namely Warsaw and Cracow. After briefly outlining the background of the events, Grzybowski presents collected examples of comedic situations, songs, jokes and short poems taken from reports, memoirs and testimonies - mainly from printed materials.

The third part of the book can be treated as a continuation of the previous parts: it has a form of annex with selected artistic forms of comicality: street songs, jokes and short poems. The quoted works lack further description, including information on the author, time of creation and the context of their performance. In many cases, songs or jokes were created anonymously, but the pieces with known authorship could have been equipped with a short comment or a footnote.

An interesting and yet unexpected supplement to the book is provided in the ending section, where Grzybowski brings up examples of controversial usages of the history of the Second World War in post-war and contemporary comedic creations. However, evoking so-called "post-laughter" (33) in the context of humour as a survival strategy seems to be a misuse. Equally bizarre is the idea of including tips and suggestions for school teachers on intercultural pedagogy. It makes it difficult to categorise the book and to follow the main line of its arguments.

As a last point of critique, the misleading book cover needs a few sentences of explanation. It is a common practice for the graphic design of the cover to rest outside the writer's competencies. However, in the case of Grzybowski's book, the selection of the images appearing on the cover should have been done with more attention and respect for the topic. The dissonance between the content and pictorial representation carries the risk of misunderstanding.

Overall, Grzybowski's book leaves the reader with an impression of insufficiency. It can be treated as a catalogue of selected materials on wartime humour, providing readers with a general orientation to the existing literature. However, due to its lack of substantive gravity, people more interested in the subject may find this book disappointing.