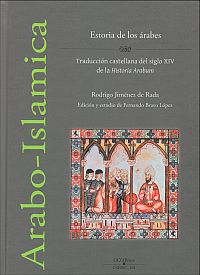 The edition of an unpublished source is always an academically remarkable event. When that edition is well cared and presented, and is preceded by an extensive, clear, precise and argumentatively well-constructed study, its interest increases considerably. This is the case of the edition of the Spanish translation of Jiménez de Rada's Historia Arabum, prepared by Fernando Bravo López through the manuscripts that contain the complete and earlier version of the aforementioned translation, which can be dated to the first half of the 14th century.

This extensive introductory study includes a biographical chapter on the archbishop; an analysis of his entire historical work; a synthesis of the last section of that work, that is, of the Historia Arabum; a trip through the perspective about the Prophet, Islam and Muslims offered by the work; and a critical view of the author's motivation. The study ends with comments about the historiographical impact of the work, as well as with the description of the manuscripts in which it has survived.

A first achievement of Fernando Bravo is the archbishop's biography, which helps us understand the complexity of this figure: a churchman who embodied the ideal of the crusade like few others did. But, at the same time, Don Rodrigo was a scholar whose concern for knowledge led him to cherish the achievements of the Arab-Islamic tradition and its precious cultural legacy. This complexity is also evidenced by his own life path influenced by the 1230s: the optimistic and all-powerful man, protagonist in the victory of Las Navas who remained faithful to King Alfonso VIII and to his memory, was transformed into a pessimistic man harassed by his own council and even expelled from Toledo, and who was commissioned by Fernando III to write a history undoubtedly marked by that difficult vital moment.

It was a history about the peoples who had occupied the Iberian Peninsula from ancient times. It is certainly not a history of the Goths, the Historia Gothica, which has been identified as so by many specialists. This Historia Gothica is one -undoubtedly the most important- of the "histories" that make up the whole of Jiménez de Rada's historiographical work and of which the Historia Arabum constitutes the last section. This explanation leads the editor to make some problematic statements. For example, the questioning of the "neo-gothic" intention of the work (62) or the consideration in it of Hispania as a mere geographical concept lacking political content (68). It is fair to say that, on the first issue, Fernando Bravo introduces important nuances. In his opinion, one can certainly speak of Neo-Gothicism in the work of Don Rodrigo, a "critical" Neo-Gothicism that idealizes the remote past of the Goths, but not the historical reality of their clearly disqualified Hispanic monarchy (64-65). This last aspect, however, should be relativized because providentialism requires detecting the sin of those who are abandoned by God in the midst of the destruction of their own kingdom. Don Rodrigo's hard treatment of many of the Goth kings does not prevent them from having built, in the mind of the archbishop, a unitary peninsular legitimacy that would be inherited by future Hispanic kings, and preferably the Castilian-Leonese. It is precisely this legitimacy that is clearly associated with a political idea of Hispania. Otherwise, it does not make much sense that the archbishop made his historical work an argument in favor of the primacy of the church of Toledo. Such a claim, obviously, was not due to a mere geographical criterion but to the awareness of a political-administrative space that, supposedly at some point -that of the "glory of Gothic greatness" according to the archbishop (64)-, would have been a reality. In any case, the author is absolutely right in stating that Hispania has not been forged only by the Gothic people but by the group of peoples that from ancient times have been building its history, although certainly the Goths play a special role (71).

The editor argues that there is a great explanatory axis on which the archbishop builds his historiographical discourse, that of considering it as a true "mirror for princes" with which Fernando III must learn at least two things. The first is that in Islam not everything was good or bad: if in the past some emirs and caliphs had been virtuous men, and even their behavior towards Christians had been correct and respectful, now the king had to adopt a similar stance towards his numerous Muslim subjects (100). The second great lesson is that this good behavior towards the subjects depended on the ruler's ability to detect the loyalty of his people: to stop insubordination and marginalize ambition, as shown by many exemplary behaviors of the Andalusi rulers, it was the best guarantee for the strengthening of the kingdom (142).

From these two premises, it is easier for us to approach the contents of the work, starting with the biography of the Prophet itself, much less polemical than what the apologetic tradition of the Christian West showed (104-105), and following, particularly, by the kind descriptions of some Muslim rulers, especially those who knew how to repress the rebellions with justice and moderation (120, 122-123).

In any case, for Bravo, and undoubtedly also for the archbishop, this only made sense from the full integration of the Islamic community in the history of the peninsula. The "sennorio de Espanna" -a key concept in the archbishop's discourse- was assumed by governors, emirs and caliphs who followed one another at the head of their "reyno" (110). Likewise, the distinction seen throughout the entire work between, on the one hand, "Arabs" and "Moors" (111) and, especially, "Moors" and "Arabs of Espanna", and on the other, "barbarians" or Berbers, (136), underlines the Hispanic nature of many of the Muslims who lived and ruled in the Peninsula.

What is the image that the archbishop had of them and their religion? Bravo devotes a chapter to this issue, making very clear that there was no interest in the Historia Arabum to provide an apologetic vision. It has already been said that the vision of the Prophet is innovative because it is not polemical, and that his doctrine, undoubtedly a fraud from the archbishop's perspective, does not become a tool for controversy. It is interesting to note that for Bravo the consideration of this doctrine in Don Rodrigo's mind is not that of a heresy of Christianity, as argued by Lucy Pick and Matthias Maser. Islam was "una extraña mezcla de judaísmo y cristianismo" (161), and it could not have been a heresy in Jiménez de Rada's mind because, otherwise, he would not have dared to defend a treatment of integration and relative tolerance towards Muslims within Christian society. In the archbishop's work there are very few global disqualifications towards Islam, and the praise that their rulers sometimes receive comes to show empathy on some occasions, such as that of Ibn Hūd's (196-197). In short, Hispanic Muslims constituted a complex society and deserved the respect that they had traditionally shown towards Christians.

Finally, the motivation of the archbishop at the time of writing his work is related to its specular nature: it was, above all, an exemplary arsenal of behavior for King Ferdinand III, as well as a source of inspiration that gave an adequate channel to the desirable integration of the Muslim minority in Christian Castile. This statement forces Bravo to carry out an interesting exercise of counter-argumentation against those who do not think the same: Cándida Ferrero, John Tolan, Lucy Pick and Matthias Maser. Particularly in his dialogue with the latter, Bravo raises two problems of special relevance: the conception of Hispania in the work of Jiménez de Rada and the use of sources for the elaboration of his discourse. Indeed, distancing himself from Maser, the editor affirms that neither the Arab sources were used uncritically nor, of course, the archbishop displayed any "national" project despite his evident proclivity to integrate the Muslim population in an exercise of tolerance that, in a way, could be defined with the term "convivencia" (204-205).

I have nothing to argue neither in relation to sources nor to the rejection of an anachronistic "national" vision in the work of the archbishop. However, I believe that the integration of Castile into a territorial framework -Hispania- exceeding its physical framework relates to the political intentions of those who seek to legitimize Castile's hegemony over the whole of Iberia. This approach, rejected by Bravo, is difficult to avoid. Moreover, it is also difficult to accept that this tolerance towards Muslims -which, as Fernando Bravo very well emphasizes, the archbishop interpreted as the need to "suffer" the other- can be conceived in terms of "coexistence".

Leaving besides these discrepancies around nuances, Fernando Bravo's study constitutes a fundamental contribution in the necessary advance of the knowledge about Jiménez de Rada and his historiographical work, providing us with a neat critical edition of the 14th century vernacular version of the Historia Arabum.