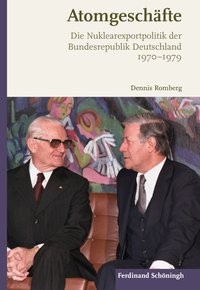 Despite the obvious reliance of German prosperity on the export of manufactured goods, ranging from consumer durables to entire factories, historical research on the workings of Germany's export machine has slowed in the past two decades. Significant books by Christoph Buchheim, Werner Bührer, and Reinhard Neebe on West Germany's return to global markets - covering a span from the late 1940s into the early 1960s - have yet to find successors for later periods of the Cold War [1]. One can, of course, find extensive business histories of car companies, steel combines, chemical conglomerates, and naturally, the banks - but these books are not generally concerned with the policy framework in Bonn. Studies of European integration or Osthandel tend, contrariwise, to highlight government policy while devoting less attention to the strategies of German businesses [2]. Perhaps Rüdiger Graf's Öl und Souveränität is the best recent example of how an economic challenge for one industrial sector - the 1973 "oil shock" - demanded international problem-solving on the part of West Germany's political authorities [3].

Like Graf, Romberg has framed his dissertation as a study of policy. The specific travails of the nuclear power industry form the backdrop: staggering capital costs and long construction times meant that the volume of sales was low. Each reactor sale was worth a vast sum, with significant implications for employment in the industry. That, in turn, gave Bonn governments tremendous motivation to lend support to nuclear reactor exports - particularly after the global recession caused unemployment in West Germany to spike in 1975. Political leaders in Bonn treated the Kraftwerk Union (KWU), the country's sole reactor builder, as a national champion, lavishing subsidies on it and offering credit guarantees for export deals. More problematically, the pursuit of contracts led West German officials to use sensitive technology exports (enrichment and reprocessing capabilities) as a sweetener, riding roughshod over agreed international nonproliferation standards. Explaining how the Bonn Republic came to behave so recklessly is the core problem of Romberg's dissertation.

The book is organized around five case studies: Brazil, Iran, Argentina, South Africa, and the USSR. Each case features its own independent chronological narrative, which has advantages for clarity of presentation. On the basis of a careful dissection of ministry documents - featuring the Foreign Office, the Economy Ministry, the Research and Technology Ministry, and the Chancellor's Office - Romberg is able to parse out Bonn's internal decision-making in unprecedented detail. This allows him to render perceptive (and generally damning) judgments about the Schmidt government's willingness to turn a blind eye toward nonproliferation dangers. Most jarring is the second Argentina reactor deal (Atucha II), negotiated in 1979; Romberg documents a pattern of deception by the Foreign Office as West German and Swiss officials tacitly undermined an agreement to demand "full scope" safeguards from countries that had not signed the Non-Proliferation Treaty. Romberg concludes that there were "no visible red lines" whatsoever for German nuclear policy in the 1970s (354). German officials convinced themselves that by meeting the demands of ambitious Third World buyers, they would diminish appetites for acquiring nuclear weapons; but this was patently unrealistic.

One downside of Romberg's case-by-case approach is that it breaks apart the chronology rather offering a unitary timeline. A continuous chronological narrative might have better captured the anxiety felt by the German nuclear industry in the early 1970s as the supply of U.S.-enriched uranium became subject to political interference. Righteous indignation toward the United States is, after all, an emotion that Helmut Schmidt displays on numerous occasions in this book. Meanwhile, four of the five cases were negotiated in parallel between 1974 and 1976, suggesting the need to consider how each scenario affected the others. Similarly, the strong political headwinds hampering the Brazilian and Iranian reactor sites in 1979 must have influenced Bonn's views on Atucha II. Readers might have benefited from a systematic overview of the state of KWU's business - perhaps via charts revealing how many reactors were on order or under construction in any given year. Knowing the exact Auftragslage, not just for the five main cases but for other customers inside and outside West Germany, would surely be relevant for understanding how much or how little Bonn was willing to push back against prospective customers. In other respects, too, the book might have incorporated more voices from the business side, updating the standard works by Joachim Radkau [4]. Even without access to the KWU archives (which is regrettable but hardly surprising), the author could have drawn upon industry periodicals such as Die Atomwirtschaft.

That said, Romberg does make excellent use of materials from Karlsruhe, one of the primary development sites for the jet-nozzle enrichment technology exported to Brazil. This is particularly significant for his exploration of enrichment cooperation between West Germany's STEAG corporation and South African partners. Cross-referencing with on-line Brazilian materials, Romberg finds a South African attaché acknowledging that the jet-nozzle process played a key role in advancing his country's capabilities. Romberg's chapter on South Africa thus offers a completely new reading of West Germany's nuclear contacts with Pretoria. The Soviet bloc spread lurid propaganda about Bonn's military and nuclear ties with the apartheid regime - helped along by an enormous scandal surrounding a shady South African visit by a Bundeswehr lieutenant general. Amazingly, this did not deter Schmidt's cabinet from approving insurance credits for a prospective KWU reactor sale to South Africa (though the contract went to France instead).

All told, Romberg's book covers a wide range of themes as it moves through the five cases; there is Ostpolitik and the Berlin problem, the anti-apartheid movement, and of course the perennial question of technology transfer to the Global South. It is telling that every single one of Bonn's partner countries was a notorious human rights abuser - and that this, rather than proliferation concerns, is what generated pushback in the West German media at the time. Only in the late 1980s did the Bundestag and the prestige press begin to critique West Germany's role in helping dangerous regimes acquire weapons of mass destruction. As Atomgeschäfte demonstrates, there's a great deal to unpack in the story of West German exports from the 1970s onward.