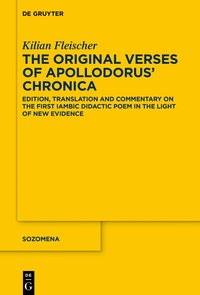 Apollodorus of Athens was one of the most important ancient chronographers. His now lost Chronica treated history from the fall of Troy down to his own time (late second century BCE). It was originally written in iambic trimeters and used Athenian archon years for dating; it was later recast into a prose version that used Olympiad datings, which is how most ancient sources seem to know the work.

Kilian Fleischer offers an edition with translation and commentary of the original verses of the Chronica. By restricting the edition to the verse fragments, the book differs in scope from the other major works on Apollodorus: Jacoby's 1902 monograph [1], his edition and commentary in FGrHist 244 and Williams' reedition in BNJ 244. Those works include all the fragments of Apollodorus - both verbatim fragments and paraphrases - and do not separate the original poetic text from the later prose versions. Fleischer's focus on the verse fragments allows us to better grasp the look and feel of the original. For instance, they show that Apollodorus did not take a strictly annalistic approach but often "loosened" his chronological scheme to present topics, such as the life of Empedocles or the death dates of Lacydes' pupils, as one continuous narrative (36; 98). By omitting the non-poetic and non-verbatim fragments (in fact the vast majority of the fragments), however, Fleischer's edition presents only a small part of the Chronica. The book thus aims to be "an independent supplement and update to Jacoby's (Williams') collections" (5), and as such it has certainly succeeded.

The edition is preceded by an extensive introduction, which discusses Apollodorus' life (7-24), the content, method, sources, models (particularly Eratosthenes' Chronographiae), reception, book division, publication dates and dedication(s) of the Chronica (25-59), the meter, language and style of the work (60-94) and the content of the verse fragments, with a focus on those preserved in Philodemus (95-108). The introduction closes with the proper preface to the edition, which discusses the editorial principles and previous editions (109-124).

Fleischer's introduction is now the best source for anyone wanting detailed information on Apollodorus' Chronica. While he draws great inspiration from the introduction of Jacoby's 1902 monograph, as the numerous references to it indicate, he does much more than simply update Jacoby. An excellent example is the section on "Apollodorus as Philo of Larissa's teacher in Athens" (16-21), in which he reedits part of Philodemus' biography of the Academic philosopher Philo (PHerc. 1021 col. 33,1-17). Thanks to a new reading, he has been able to show that Philo's teacher named "Apollodorus" was in fact the grammarian Apollodorus of Athens. This shows that Apollodorus had ties not only with the Stoics (being a pupil of Diogenes of Babylon and a friend of Panaetius) but also with the Academy. Furthermore, the introduction (41-43) also contains an excellent new edition of Philodemus' biography of Clitomachus (PHerc. 1021 col. 24,30-26,4).

Another merit is that Fleischer highlights not only Apollodorus' importance as a historian (the focus of most scholarship on the Chronica) but also his literary importance as the creator of iambic didactic poetry. Up to his time, the standard meter for didactic poems had been the dactylic hexameter or elegiac couplets. Apollodorus was the first to adopt the comic iambic trimeter for this genre. Fleischer offers an excellent, in-depth discussion of the key metrical features, particularly in comparison with the comedians (Aristophanes and Menander) and other iambic didactic poets (the so-called Pseudo-Scymnus, Dionysius, son of Calliphon, the physician Damocrates and the Sphaera Empedoclis). One text missing from Fleischer's discussion of iambic didactic poetry after Apollodorus (90-93), however, is a work entitled On the Earth (Περὶ γῆς), attributed to Apollodorus by Stephanus of Byzantium (FGrHist 244 F 313-330) and cited as Γῆς περίοδος, Circuit of the Earth by Strabo (FGrHist 244 T 16). The authenticity of this work is debated [2] and should have probably been discussed somewhere.

The crown jewel and core of Fleischer's book is the edition, translation and commentary of the long excerpts from Apollodorus in Philodemus' Historia Academicorum (verses 21-107), a work preserved only in carbonized papyri from Herculaneum. The excerpts discuss the succession of Academic philosophers from Lacydes until Clitomachus and list numerous otherwise unknown philosophers. For the edition of the papyrus fragments, Fleischer relies on autopsy of the papyrus in Naples, multispectral images (produced by Brigham Young University in 2000), "hyperspectral images" (produced in 2018) and the Oxford and Neapolitan apographs. Jacoby's edition of these fragments is completely outdated, since he relied on Mekler's 1902 edition. [3] Currently, the standard edition of Philodemus is Dorandi, [4] which is the basis for Williams' text. However, Fleischer, who is preparing a new edition of the complete Historia Academicorum, has been able to significantly improve the text and restore lines which had been illegible before, especially thanks to the new imaging techniques.

He summarizes the most important new readings on p. 102-104. I will highlight only two (among many) examples. Fleischer shows that, contrary to the communis opinio, (1) Carneades was not succeeded by another philosopher named Carneades - this Carneades the Younger never appears to have existed! - but by Polemarchus (194-195), and (2) it was Zenodorus of Tyre (not Metrodorus of Stratonicea) who was Carneades' second pupil to teach outside Athens (217). At the same time, Fleischer avoids overly speculative supplements and even indicates where he deviates from his reconstruction of the text in previous articles.

For the fragments preserved in Philodemus, Fleischer has chosen to only print lines that are more or less legible and indicates where he omits illegible or barely legible sections. The potential content of the omitted fragmentary lines is discussed in the commentary. Moreover, at the end of the book, Fleischer offers a diplomatic transcription of the entire excerpt (PHerc. 1021 col. 26-32), with a detailed description of all the traces and reproductions of the disegni, MSI and HSI images. Of particular interest are the HSI, which were created for this papyrus alone and show a greater contrast between the ink and the charred papyrus surface than the MSI do. The result is quite spectacular. In total, the edition prints 87 verses taken from Philodemus. Fleischer estimates that "the overall number of verses copied by Philodemus must have been around 165" (96). Furthermore, he shows that Philodemus' text was not one continuous excerpt but consisted of at least three separate excerpts. In his edition, he indicates where Philodemus seems to have skipped some text.

I also have some reservations about verse 20 (= St. Byz. θ 44 = FGrHist 244 F 351). Stephanus writes: Θηρασία· νῆσος ἐν τῷ μεταξὺ πόρῳ Κρήτης καὶ Κυρηναίας. τὸ α μακρὸν· "μεταξὺ τῆς Θήρας τε καὶ Θηρασίας". The comment on the length of the first α in Θηρασία confirms that this is a poetic quotation, but it is far from certain that it is taken from Apollodorus' chronicle, a point which Fleischer (161) is aware of. Indeed, Apollodorus is not mentioned at all. Thus, it could also go back e.g. to a geographic poem that used iambic trimeters. Therefore, I would have separated it from the rest of the corpus as a "conjectural" fragment.

Conversely, there is one fragment identified by Jacoby as a verbatim quotation which Fleischer does not include or even mention, viz. St. Byz. α 441 (= FGrHist 244 F 23): Ἀρόερνοι· ἔθνος μαχιμώτατον τῶν πρὸς τῇ Κελτικῇ Γαλατῶν. Ἀπολλόδωρος δʹ Χρονικῶν· "Κελτῶν Ἀροέρνους". Stephanus' phrasing makes it clear that this is a verbatim quotation, attesting Apollodorus' use of the ethnic Aoernoi.

Finally, the fragment on Empedocles in D.L. 8,52 (= verses 4-10 = FGrHist 244 F 32a) is a bit problematic, which Fleischer (113) is again aware of. Diogenes' phrasing makes it clear that he is quoting Apollodorus verbatim. However, the reference to the 70th Olympiad shows that Diogenes quotes from a later prose version of the Chronica and not from the original poetic text. In his edition of Diogenes Laertius, Dorandi did not try to reconstruct the original poem but left the quotation unchanged. Nevertheless, Fleischer is right to point out that the text quoted by Diogenes does allow us to (partly) restore the original trimeters. The fragment thus gives us an idea of how the poem was adapted into a prose version, particularly with the transposition of words.

In general, Fleischer's translation is reliable and accurate. I have only noticed one error: in verse 38, he incorrectly translates the genitive Ἀντήνορος as "Antenorus" (133). This is probably a mere typo - in his commentary (175) he correctly writes "Antenor" -, though the error is repeated in the index (295), where he also incorrectly writes "father of Eubulus of Erethria" (it is actually "Erythrae").

The commentary is outstanding and covers all historical and philological points. It outshines any previous scholarship. The only point I could add concerns the commentary on verse 1 (148-150). For Eusebius' note on the war between Dyme and Elis, Fleischer only mentions the Armenian translation of Eusebius' chronicle. However, the original Greek words actually survive in the excerpta Eusebiana (An. Par. II p. 143 Cramer). The excerpt reads διὰ τὸν πρὸς δυσμαίους πόλεμον. The corrupt δυσμαίους (an error for Δυμαίους) was incorrectly rendered by the Armenian translator as "the people from the west," as if Eusebius had written δυσμικούς. [6]

In conclusion, despite the minor points mentioned before, Fleischer's book is excellent. It is a milestone in scholarship on Apollodorus and can henceforth be considered the standard work on the original verses of the Chronica.

[6] The section on Olympiad chronology in Eusebius' chronicle has been reedited with a translation and extensive introduction by P. Christesen and Z. Martirosova-Torlone: The Olympic Victor List of Eusebius: Background, Text, and Translation, in: Traditio 61 (2006), 31-93.