Julio Samsó: On Both Sides of the Strait of Gibraltar 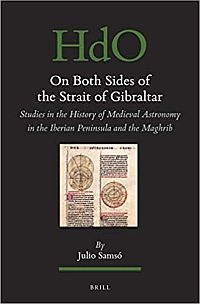 This most impressive volume can be considered the summit of the extensive research undertaken by the author since 1960 on the development of astronomy in the Iberian Peninsula and the Maghrib during the Middle Ages. Samsó and the excellent team of disciples that he has guided in the University of Barcelona during more than thirty years have carried out in depth studies of a huge amount of astronomical written sources, mostly in Arabic language, but also in Latin, Castilian, Catalan and Hebrew. This broad research programme has resulted in a good set of books and articles published during this long period of time by the best science historians active in Spain during the last decades. The main added value of this volume is to present all these material completed by the author, when needed, and organised in a way that highlights the existence of a shared astronomical tradition on both sides of the Strait of Gibraltar during the Middle Ages. Julio Samsó acknowledges and cites precisely every publication by any of his disciples along his book, as much as those of researchers around the world, following fair and honest research integrity procedures.

The book is organised in seven chapters illustrated with a set of 101 figures, from geometrical drawings to pictures of astronomical instruments, contributing to the comprehension of the texts. While the reader could expect to find a chapter of conclusions at the end of the book, the author has decided to place it at the beginning, in the form of an historical outline, a brief chronological survey of the development of astronomy in al-Andalus, the Maghrib and the Christian Kingdoms in the Iberian Peninsula from the 8th to the 15th centuries. The good level of detail offered in this first chapter may well fulfil the needs of those approaching the issue for the first time in a general manner but it also encourages the specialists to move to the following chapters with a clear idea of Samsó's objectives, hypothesis, proposals and concluding achievements.

Chapter two addresses mīqāt, the astronomy applied to the problems of religious Muslim worship, focussing on the determination of the five canonical prayer hours and the correct value of the azimuth of the qibla for the different main locations in the Iberian Peninsula and North Africa along time. Samsó refers to all the sources available in order to understand the difficulties in arriving to correct values for the issues mentioned before. He analyses the different computational geometric approaches found in the medieval treatises on astronomy. A good number of extant medieval mosques witness that the miḥrāb does not face geographical direction of Mecca because the achievements of the astronomers were ignored by the political and religious rulers who chose to follow tradition, as already stated by David King and Mònica Rius, among others.

Chapter three faces the importance that astronomical predictions reached in the Middle Ages. The techniques to cast horoscopes were mathematical and Samsó considers that, in many cases, prediction of the future based on celestial bodies was the main reason for the patronage of astronomy carried out by caliphs, emirs and kings in general, irrespective of their religion.

Chapter four deals with astronomical instruments developed, manufactured and, in some cases, invented in the Iberian Peninsula and the Maghrib during the Middle Ages. The texts describing the structure, elements and uses of instruments such as sundials, astrolabes, quadrants, celestial globes, armillary spheres, universal instruments, equatoria, etc., are carefully presented, analysed and compared with the actual objects made in the same territories, that have survived to the present time.

The next chapter makes the reader move from the more practical approach to astronomy represented by the instruments to the theoretical hayʾa (cosmology), a discipline that did not reach the same level in the territories under study than it had in Easter Islamic lands. The few extant texts, all offering very general approaches to the Ptolemaic system of the universe are, nevertheless, introduced and analysed by Samsó in line with his objective of not letting aside any aspect related to the "science of the stars".

Chapter six is fully devoted to the detailed description of the innovations introduced in the Ptolemaic astronomy by the andalusí astronomer Ibn al-Zarqālluh, known as Azarquiel, active in Toledo in the second half of the 11th century. The contribution made by this extraordinary astronomer to the astronomical theories of his time were progressively adopted in al-Andalus and the Maghrib as much as in the Hispanic medieval kingdoms, mainly by the Jewish astronomers active in the courts of Castile and Aragon during the Middle Ages. Samsó highlights Ibn al-Zarqālluh's profile and considers that his texts and their further influence explain the common astronomical tradition at both sides of the Strait of Gibraltar. The chapter drives the reader trough Azarquiel's three geometrical models of trepidation, his discovery of the motion of the solar apogee, his models to account for the changes observed in the obliquity of the ecliptic and solar eccentricity and finally his correction of Ptolemy's lunar model. An excellent corpus of geometrical drawings help to understand the models as much as the comparative tables of data and the mathematical functions.

Chapter seven, the last and longest one, addresses the Iberian and Maghribī zījes, the astronomical tables written between the 9th and the 15th centuries and their relationship with the production of zījes in the Eastern Mediterranean territories. The detailed study of each of the extant texts leads the author to conclude that two astronomical schools lived together in the territories under study during the Middle Ages: the Sindhind Indian school and the Mumtaḥan Persian school, represented by the mathematicians and astronomers al-Khwārizmī (fl. ca. 830) and al-Battānī (d. 920), respectively. For each of the zījes written in al-Andalus, the Hispanic kingdoms and the Maghrib, Samsó identifies how much is present out of the two schools and the evolution of their identifying elements along time.

The volume ends with a rich bibliography and two indexes, one for parameters and numerical values and another one for names and subjects.

The book is mainly addressed to historians of astronomy but it is written in such a clear and ordered way that all kind of historians, philologists, astronomers, mathematicians, scholars interested in scientific instruments and readers curious about the development of science in the Middle Ages, far from prejudices related to it being just "ten dark centuries", will enjoy the reading.