Christine I. Ho: Drawing from Life 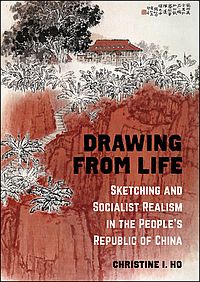 Chinese art from the Maoist period (1949-1979) has for a long time been studied in relation to the politics of a Communist state that strove to control all forms of cultural expression. The seminal studies by Ellen Johnston Laing and Julia F. Andrews are structured in line with the political history of the People's Republic of China (PRC), with its mass movements and shifting power relations as the forces driving artists' responses. [1] Christine I. Ho complements this angle in an extremely rich book that foregrounds the perspectives of artists and focuses on sketching, a pivotal practice in art production during the first seventeen years of the PRC from 1949 to 1966. [2] But Drawing from Life is not a book on sketching alone. Ho takes what she calls the mass sketching tours organized by the cultural bureaucracy as her point of departure to launch into wide-ranging discussions of academic drawing, socialist realist oil painting, ink painting's reinvention through watercolor, transmedial references to panorama photography, and theoretical debates on impressionism. The result is a thoughtfully composed, densely written book with micro-histories of these phenomena, each of which could be the subject of a whole monograph. The thematic breadth of the book is combined with theoretically informed analysis and evocative, ekphratic descriptions of the artworks.

The book is divided into two parts. Part 1 examines three practices that defined how art was produced in socialist China: academic drawing, sketching as an instrument of political education, and the merging of ink painting and watercolor in the portrayal of the national landscape. Chapter 1 describes how art pedagogy was standardized through systematic training in academic drawing. It traces the introduction of practices following French models during the Republican period, most notably by Xu Beihong, gives an insightful account of how the Soviet Chistiakov system of drawing pedagogy was translated, received and implemented in China over the course of the 1950s, and recounts the opposition it met from ink painters who proposed plain-line drawing (baimiao) as an indigenous and preferred form of drawing. Chapter 2 takes Wang Shikuo's Bloodstained Shirt (1959), a monumental charcoal drawing on canvas depicting a struggle session during the land-reform movement, as its centerpiece to explore "going to life", when artists left their studios to observe the working and living conditions of peasants, workers, and soldiers. Introduced at the Lu Xun Art Academy in the wartime communist base at Yan'an, "going to life" combined social investigation and political education for both the artists and the depicted groups. Ho characterizes mass sketching in the countryside as profoundly anti-academic and as a countermeasure to the rigidity of studio practice. Chapter 3 describes how "national painting" (guohua) was reconfigured, and the conundrum faced by artists who strove to preserve ink painting as a national art form in spite of the problematic associations of its brushwork with elite culture. During state-sponsored sketching tours to scenic sites, artists combined watercolor sketching with ink painting, supplanting the linearity of brushwork with the planarity of washes. It is eye-opening to read how the thick, opaque layers of ink for which Li Keran is known result from his engagement with the translucid qualities of watercolor.

Each of the first three chapters of Part 2 is dedicated to a different genre of socialist realism: the construction landscape, revolutionary history painting, and the diplomatic gift sketch. They are equally thorough in their analysis, subtle in their discussions of paintings, and thought-provoking. Respectively, they are centered on Li Xiongcai's Flood Prevention in Wuhan (1956) and the iconography of dam construction; Dong Xiwen's use of color in his Long March oil sketches and The Red Army Crosses the Grasslands (1956) and the impressionism debate of the same year; and the sketches that Fu Baoshi, Guan Liang and Li Keran made during their journeys to Czechoslovakia, Romania, and East Germany.

Chapter 7 offers a new understanding of the red-washed landscapes associated with the term "combination of revolutionary realism and revolutionary romanticism." Ho describes a sketching tour that took artists from Nanjing across the country in 1961, during the Great Famine resulting from the disastrous Great Leap Forward. She argues convincingly that the devastated landscape had become unrepresentable and that the incompatibility of reality with the norms of socialist realism led painters, like Qian Songyan in his Red Crag (1961), to turn to idealized landscapes that are only loosely tied to sketching in situ.

Drawing from Life demonstrates the diversity and aesthetic complexity of artistic creation in the early years of the PRC. The political organizations and ideological directives that drove the mass sketching tours, on the other hand, remain vague, almost like an abstract power working in the background. That every aesthetic choice had political implications is foregrounded in chapter 2, but could have been explored in more depth in other parts of the book. Another aspect that would have benefitted from further elucidation is the central term, "mass sketching," whose meaning and conceptual implications are never clearly defined - Ho's use of it seems to refer both to the revolutionary masses (qunzhong) and the large number of sketches. Another point that leaves the reader curious is how the antithetic practices of academic drawing and sketching social life in villages and factories described in chapters 1 and 2, both paradoxically carried out by faculty at the academies, were negotiated within the art schools. A particularly compelling aspect of chapter 1 is Ho's discussion of the neologism zaoxing, which she traces from its introduction in 1917 via Japanese translations of the German bildende Kunst to its function as a central aesthetic concept in the 1950s and 1960s. Yet, by translating the term as "plasticity," she ties it too firmly to academic realism. This forecloses the semantic openness of a more literal understanding of the term as "creating form." Arguably, it was this openness that made the term attractive for guohua artists like Shi Lu who used it to argue for formal reduction. The book contains very few errors, especially considering the breathtaking amount of material presented: the National Hangzhou Art School was founded in 1928, not in 1926 (27); Shi Lu was not the president of a certain Chang'an Painting Academy, but of the Xi'an branch of the Chinese Artists' Association, and the group of painters that he led there became known as the Chang'an School (218).

In sum, Christine Ho's Drawing from Life is a must-read for anyone working on Chinese modern art or on the transnational histories of realism and socialist culture. It is an important and intellectually stimulating book that substantially deepens our understanding of the multifaceted nature of art production in socialist China and successfully counters the notion that art was merely a political tool by showing how artists explored exciting new ground along their sketching tours.

[3] The importance of sketching is also demonstrated in Yi Gu: Chinese Ways of Seeing and Open-Air Sketching, Cambridge 2020, which discusses some of the artworks examined in Ho's Drawing from Life.