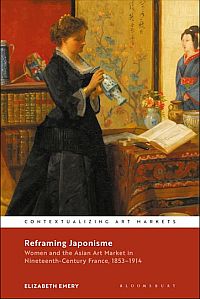 Elizabeth Emery's book offers a revelatory new reading of the development of Japonisme in late-nineteenth-century France. Emery critically interrogates the narratives about the small circle of men who have been credited with pioneering the taste for Japan and exposes their strategic distortions. She demonstrates how 'bachelor Japanists' (to use Christopher Reed's phrase) tended to erase the contribution of women to the development of their collections and connoisseurship. "They defined the field, shared objects, and recorded one another's influence for posterity," perpetuating the record of a homosocial clique, Emery observes (89). The erasure was driven not simply by misogyny and sexist assumptions of female consumerism as frivolous. It also reflected a conscious bid to elevate the status of Japanese art in general, to move it away from the seemingly trivial domain of the feminine and the decorative, and instead vindicate its qualities as a branch of fine art (especially with regard to bronzes and ukiyo-e prints). This rhetorical shift not only served to disguise the much more fluid range of interests that powered the vogue for all things Japanese in the mid-nineteenth century; it also functioned to read Japanese art through the often-inappropriate categories of analysis favoured for Western art. It is in this context of cultural redefinition that the significance of women to the discovery of Japanese art in nineteenth-century France got lost.

This is a story, then, of historiographical forgetting. Emery cites her debt to Julie Johnson, who has deployed the term "memory gap" to explain the striking disappearance of female artists from the canonical story of Vienna 1900 (3). [1] Her research confirms that writing women back into cultural history is not simply a form of supplementary knowledge, correcting an earlier oversight; rather, putting gender at the heart of the analysis reveals a quite different path through the nineteenth century, and indicates the conceptual inadequacy of many existing approaches. One great strength of Emery's method is her attention to shifting terminology. Her book demonstrates how Japanese art was gradually disaggregated from the more generic rubric of "Chinoiseries" (tellingly a feminine plural, carried over from the eighteenth century). Furthermore, she explains how the singular term of "Japonisme", coined by Philippe Burty in 1872, through its affinity with other "scientifically based systems and movements" like "Naturalisme" and "Positivisme", came to possess an intellectual legitimacy quite different from the popular, commercialised trade in Japanese knick-knacks (or "japoniaiseries") (38). At the same time, Emery draws out and deconstructs the gendered metaphors that pervade the discussions of both Asian culture and female collectors as a type. Her thoughtful analysis of key sources - such as auction records and the catalogues of print exhibitions organised by Koechlin - carefully teases out the presence of women in these documents, but shows the limits of the evidence in revealing their motives or agency.

This is a highly ambitious book, built around a cumulative argument threaded through four substantial chapters. The success of such revisionism hinges on the case studies selected, and at the heart of Reframing Japonisme is the beguiling figure of Clémence d'Ennery (née Desgranges) and her exceptionally rich surviving archives. Today she is less remembered than her husband, the playwright Adolphe d'Ennery, although Emery demonstrates that she was also his business partner and integral to his theatrical career. As early as the 1840s, Gisette, (an affectionate nickname linked to her humble origins), was already assembling her collection of "Chinese monsters" from curiosity shops in Paris. In this, she was ahead not only of the opening of Japan, but also the more celebrated collections of Asian art constructed by her male peers in the following decades. Her "Chinese monsters" were, in fact, figurines created in China, Japan, India and Korea, a reminder of the elasticity of definitions of Asian art in the mid-nineteenth century. This collection of "chimeras" exerted a strong allure over the Goncourt brothers, as recorded in their journal in 1859, and continued to surface in more indirect ways in their later prose (such as the celebrated passage in Idées et Sensations). But, with each iteration, the credit due to Clémence d'Ennery further receded, so that Edmond de Goncourt could instead stress in 1884 that he and his brother were the real pioneers. This marginalisation reached its apogee in 1893 when Clémence d'Ennery decided to bequeath her collection of 6,300 pieces housed in a mansion on the avenue Foch to the French state to become a public museum. Due to a protracted legal dispute after her death, the new museum only opened its doors in 1908, by which point her collection was denounced in the press as exotic junk purchased from department stores. Even the credit for its creation was stripped from her in an enduring misunderstanding. "It is appalling that twenty-first-century scholars persist in describing the Musée d'Ennery as the work of her husband or her male friends" (200).

The tight focus on a few select figures like Clémence d'Ennery allows Emery to map the broader market for Japanese art in late-nineteenth-century Paris. The ledgers kept in the Musée d'Ennery vividly record how she negotiated with many dealers, highlighting a much wider group of actors involved in 'selling Japan'. This includes the retailer Louise Desoye on the rue de Rivoli who, it seems, had lived in Yokohama for three years and could speak the language (as uncovered by Toshio Watanabe). Over time, her eminence as a teacher in matters of Japanese taste "progressively gave way to stories about the acumen of the men who recognised the interest of her shop", such as the expatriate painter James McNeill Whistler, whose purchases there filled canvases like The Japanese Vase (57-58). Another fascinating character is Florine Langweil, who began working with her husband selling Chinese and Japanese objects on the boulevard des Italiens before becoming an expert in Chinese antiques and making major bequests to the Louvre, the Musée de Strasbourg and the Musée Unterlinden in Colmar. Like Desoye, Langweil also donated to the Musée d'Ennery, in memory of one of her best customers. The existence of this female network provides a counterpoint to the much better known contemporary dealer, Siegfried Bing.

Emery's study has application beyond the field of Asian art. Through its analysis of the interplay between the construction of cultural legitimacy and the mechanisms of gendered exclusion, the book invites reflection on bigger nineteenth-century trends. In contrast to essentialising assumptions, the evidence suggests that men and women were attracted to similar kinds of objects: Emery cites a brilliant episode from the diaries of the suffragette, collector and art patron Louisine Havemeyer describing the delight that the renowned musician Lord Kitchener took in delicate porcelain; she also points out that the politician Georges Clemenceau, a key ally of d'Ennery, possessed his own collection of 3,500 Kogo figures from Japan (31). The gendered divergence in the late-nineteenth century was predicated on new ways of talking about collections, tied to scholarly protocols and new pedagogic institutions, rather than changes in collecting practices. In particular, the rise of professional networks and connoisseurship pushed women - and commercial intermediaries in general - out of the official narrative.

Reframing Japonisme will be essential reading for anyone working on nineteenth-century collecting as well as those researching the circulation of Asian objects in Europe. It demonstrates how sensitivity to other ways of performing an engagement with Japan - whether by loaning to exhibitions, displaying items in vitrines, posing for photographs in Japanese dress or hosting salons (like Judith Gautier's Asian Academy) - can uncover women's central role in these processes of mediation and discovery. "Interest in Japan crossed linguistic, ethnographic, decorative, fantastical and historical boundaries" (145). Emery's astonishingly broad range of sources and of erudition traverses many boundaries while maintaining a cohesive argument. More might be said about the appeal of Buddhism - comparative religion was a topic of deep interest to collectors like Henri de Cernuschi and Émile Guimet - and one wonders about women's engagement with Japanese spiritual beliefs. But this is an ingenious and inspiring intervention that requires us to go much further: "Initiators, partners, muses, artists, we have everything to gain from continuing to expand the frame of Japonisme to include women and their often unsung contributions" (220).