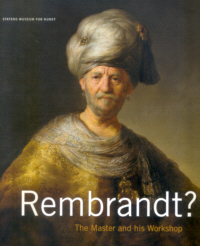 This catalogue, accompanying the exhibition of 4 February - 14 May 2006 at the Statens Museum for Kunst, brings to the fore a collection that ought to be better known. Most welcome, this publication integrates some paintings by Rembrandt and his pupils into the general field of Rembrandt studies. Of fascinating interest in this group of paintings are those works by pupils that reflect inventions by Rembrandt; these works reveal not only how pupils learned the style and composition of the master, but also how they combined elements from various paintings by Rembrandt to arrive at their own pictorial solutions.

Two essays by Jaap van der Veen on the Dutch Republic in the Golden Age and by Ernst van de Wetering on Rembrandt's biography serve as an excellent introduction. The five following essays specifically address the Copenhagen collection. Lene Bøgh Rønberg discusses the paintings once considered to be by Rembrandt and their varying critical fortunes; Ernst van de Wetering discusses the relationship between Rembrandt original paintings as prototypes ('principaelen') for works by pupils; J#248;rgen Wadum explains the technical examinations done on the Copenhagen paintings and the resulting changes in attributions; and Eva de la Fuente Pedersen thoughtfully considers the sketchiness of some Rembrandt paintings with respect to practice and theory, and the writings of Junius.

The works exhibited consist of 58 paintings by Rembrandt and pupils, 4 Rembrandt drawings, and an unspecified number of Rembrandt etchings. In two essays, Jan Garff discusses the critical fortunes of the drawings and the etchings. If perhaps less prominent in this context, his essays are extremely useful for an understanding of the historiography of the prints. He charts the cataloguing of Rembrandt prints from Gersaint (1751) to Björklund and Barnard (1968), discusses the fate of the copper plates, and explains the finer points of the printing process. Yet it is the paintings that particularly warrant interest.

From the Copenhagen museum, the exhibition featured 8 paintings once considered to be by Rembrandt and 13 by known pupils. (Two paintings once considered Rembrandts are Drost's Young Scholar in his Study of ca. 1653 (cat. 39) and Lievens' early Self Portrait (cat. 21).) To this core are added 37 loans, judiciously chosen to relate to the Copenhagen works.

The issue of authenticity is a theme throughout. Of the 8 "Rembrandts", two are now, as a result of the attention and technical examinations in preparing this catalogue, considered to be by the artist. The re-attributions of these two pictures are well-argued and seem convincing, yet may come as a surprise to some. Both are sketchy, and relate to other paintings. One is Old Man in Profile (cat. 4), a small study of ca. 1630, that is analogous to the Head of an Old Man in a Cap (fig. 4b; Agnes Etherington Art Centre, Queen's University, Kingston, Canada, Gift of Drs. Alfred and Isabel Bader), which was copied in an etching by Jan van Vliet. The second reinstated Rembrandt is the Sketch for The Knight with the Falcon (cat. 16; ca. 1659-61), which seems to be a preparatory sketch for the painting The Knight with the Falcon (ca. 1661; cat. 17; Göteborgs konstmuseum).

The remaining six non-reinstated paintings are each interesting in their own right. These include a copy of the Self Portrait with Gorget (cat. 56), which relates to the versions in Nuremburg and The Hague; A Young Woman Resting her Hands on the Picture Frame (cat. 57), which relates to the framing devices of Rembrandt's Agatha Bas (fig. 57a; Queen Elizabeth II), among other works; and An Old Woman (cat. 58; after 1655), which relates to the Old Woman Reading of 1655 (fig. 58a; Buccleuch collection, Drumlanrig Castle).

For several hundred years, the Supper at Emmaus (cat. 11) was "regarded as one of the greatest treasures" in the collection (80), and it was considered a Rembrandt until the Rembrandt Research Project's examination of it in the 1980s. We may now regard this canvas as a very interesting variant of the 1648 Supper at Emmaus (fig. 20; Paris, Louvre). The Copenhagen Emmaus has the signature "Rembrandt f. 1648" which is not questioned in the technical examination. The artist of the Copenhagen Emmaus transformed the natural light of the Louvre panel into a night scene, added another servant, and an illusionistic curtain and rod. These changes, and other adjustments, seem crafted so that a Rembrandt invention is appropriated by a pupil, and, in the process, personalized. As an anonymous variant produced close in time to a painting by Rembrandt, and apparently under his guidance, it may well have been sold as by him.

The artistic personalities of some of Rembrandt's pupils and followers here emerge quite sharply. Paintings by Dou, Bol, Flinck, Aert de Gelder, Karel van Mander III, Ovens, and Kiel in the Copenhagen collection are occasionally paired with appropriate loans. Three paintings of bare-breasted women may be portraits histories and relate to the Venetian courtesan type, by Bol (cat. 30), Flinck (cat. 35) and Ovens (cat. 51). Ovens' Simeon in the Temple (1651; cat. 52) is an interesting derivation of the two paintings by Rembrandt with the subject (1630; cat. 2 and ca. 1669, cat. 19). Bol's Holy Women at the Sepulchre (1644; cat. 29) may be compared here to Rembrandt's Noli mi Tangere (1638; cat. 10; London, Royal Trust) and derives some features from Rembrandt's Angel Leaving Tobit and his Family (1637; fig. 29a; Paris, Louvre). These are only some of the interesting juxtapositions in this group of paintings.

The catalogue is beautifully produced. However, notes for the catalogue entries are in an appendix, at the back of the volume. This may appear to make the catalogue more friendly to the generalist, who need not be burdened by the references; yet it is frustrating for the specialist, who must flip back and forth. Since this seems to be a fairly common method of laying out exhibition catalogues, which serve a broad audience, it may warrant rethinking on the part of designers and editors. Most effectively and capably, this Rembrandt year publication integrates the Copenhagen paintings into the general field of Rembrandt studies.