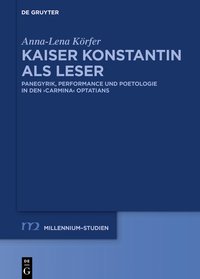 This welcome monograph situates the neglected, marginalized and intriguing Latin poet Optatian in the contexts of Latin panegyric and of high cultural aesthetics in the court - and person - of Constantine. It is a timely work: recent decades have seen tremendous advances in criticism of panegyric and Optatian, spear-headed by Nixon and Saylor Rodgers (1994) and Polara (1973, 2004) respectively, and followed in train by lots of refreshing and imaginative studies. However, panegyric and Optatian have generally been kept in scholarly isolation from each other, very rarely brought into a dialogue that extends beyond a nodding acquaintance in a learned footnote. As her subtitle suggests, Anna-Lena Körfer's book-length study has the scope for extended treatment of many topics that are much favoured in contemporary Latin literary scholarship, and also addresses authorial self-fashioning, intermediality, synaesthesia and the relationship between literature and political power. The book packs a great deal in, but is sympathetically paced and clearly organised, and should appeal to those unfamiliar with the field as well as to seasoned academics.

Although much remains unknown, and there are complications in the ancient testimony, a degree of consensus about some details of Optatian's life and work has formed. An aristocrat at Rome, he was publishing poetry within a decade of Constantine's victory over Maxentius at the Battle of the Milvian Bridge (October 312); in 322 or 323 he was exiled for an indiscretion he denied; by means of a poetry collection, in July 326 he successfully petitioned Constantine for his recall; he was appointed Governor of Achaea sometime soon after his recall before twice holding the prestigious Prefecture of Rome (329 and 333, both times briefly). Of the 31 poems attributed to him in the manuscript tradition, 4 are often considered inauthentic (17, 22, 24, 31); more of them may be. Related and perhaps intractable questions concern the contents of the poetry book Optatian sent to Constantine (it was referred to some decades later as an insigne uolumen, 'outstanding book') and if it (or any later edition) had the title panegyricus. Körfer occasionally challenges received wisdom (e.g. 107-8, on the inclusion or otherwise of carmina 4 and 5 in the insigne uolumen, or 261, on the dating of carmen 18) but the overriding focus is rather the cultural and intellectual milieu of Constantine's reign, and this is effected with judicious poise.

During Optatian's lifetime, it seems there was an upturn in the fortunes of Latin panegyrical oratory. Only one speech (Pliny's to Trajan) of the 12 in the collection we know as the Panegyrici Latini is not from the late third or fourth century CE; in fact, a distinguished authority recently observed that 'epideictic rhetoric took on a new lustre in the period of Constantine' (Pernot 2015, 23). Reconstructions of performance contexts for these speeches tend to picture a basilica or senate house in Rome or a provincial capital such as Trier, with aristocrats and members of the imperial entourage gathered in number to hear the orators speak. Körfer sets out this context in an efficient introduction (1-21) which headlines Optatian's invention of the panegyrical lattice poem (carmen cancellatum - nos. 2-3, 5-14, 16, 18-19, 21, 23) as well his three figure poems (nos. 20 a pneumatic organ, 26 an altar , 27 panpipes). For the carmina cancellata, different levels of reading are identified - (1) of the hexameters according to conventional practice, (2) of the so-called uersus intexti, which require the eye to trace words, phrases and sentences vertically and/or diagonally including acrostics and telestics; (3) of geometric and floral patterns created by these uersus intexti (independently of their own literal meanings); and (4), (a level not available in every poem) where the reader themselves can trace the trajectory of the uersus intexti according to their own preference, to generate new sequences of text.

There then follow two long chapters, each articulated with helpful subheadings. In 2. 'Grundlagen: Lesen und Loben', Körfer shows due diligence in theoretical discussions of performativity, semiotics, and synaesthesia before exemplary discussion of carmina 1 and 4 as well as a letter exchange between Constantine and Optatian. 1 and 4 are not carmina cancellata but they are shown to be concerned with the visuality of written text, and so the materiality of text as constitutive of literary praise-giving is foregrounded as an index of the relationship between Constantine (laudandus) and Optatian (laudatory). From this vantage, in the long and rewarding chapter 3. 'Performative Lesestrategien bei Optatian: Ausprägungen und Entschlüsselungsebenen', Körfer highlights a range of potential reading practices made available to Constantine by Optatian in poems 2, 5, 6, 7, 9, 10, 11, 12, 18, 19, 20 and 21. The sweep is considerable, taking in puzzles, play, architecture and even town planning. Throughout, Optatian's inventiveness and daring are as much in evidence as his control and ingenuity. Before the volume closes with indices and appendices (a reference list of the Panegyrici Latini; tidy transcriptions of Optatian's carmina cancellata and figure poems; and some colour plates of eight MSS folios), Körfer concludes with some thoughts about the "transformation of panegyrical technique in late antiquity" (334-5). Here, Optatian's agency is perhaps a little overstated, for despite his brilliance, it is not clear how influential he was. From Jerome's Chronicle, we can assume Optatian's work was known in the late fourth century, but according to the evidence of Claudius Mamertinus, Symmachus, Ausonius, and Drepanius, oratorical performance in prose remained the standard medium for formal imperial praise-giving, just as it had for the orators Eumenius and Nazarius before Optatian - for although these men made sure their work saw it through to a written version with some aspiration for a posterity, its debut was in spoken performance, not text. Even when panegyrical verse seems to have gained the ascendency, in the epic-panegyrics of Claudian and his successors Sidonius, Corippus and others, intermediality, synaesthesia and the role of the reader had none of the dynamic prominence they had enjoyed in Optatian. To the list of Optatian's talents that Körfer helps us to appreciate, we might add his ability to identify a cultured emperor when he saw one; what he would have achieved under men like Galerius or Valentinian we can only guess.