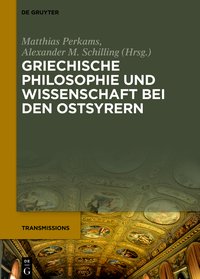 A collection of nine essays on the reception of Late Antique philosophy in the East Syriac tradition in memory of a Chaldean bishop who was a victim of the massacres in south-east Turkey in 1915 may seem surprising, but is in fact entirely appropriate, in that the bishop in question, Mgr Addai Scher, was a notable scholar who published, amongst other things, three documents which have proved to be of fundamental importance for the study of the intellectual history of the Church of the East, namely, the Syriac Cause of the Foundation of the Schools, by Barḥadbshabba Arbaya, and the Ecclesiastical History by (almost certainly) another Barḥadbshabba, and the Arabic Chronicle of Siirt, all published in the Patrologia Orientalis. The collection, however, is more than just a tribute to a fine scholar, since its aim is also to draw attention to the role of scholars of the Church of the East in the Syriac reception of Late Antique philosophy, alongside their West Syriac counterparts, who have hitherto received much more attention from scholars, partly, of course, because many of them were also involved in the early work of translation from Greek into Syriac.

This second aspect of the collection is brought out especially in Matthias Perkams' programmatic introduction and his later chapter on the developments in the sixth-century East Syriac reception of Greek philosophy, from the beginnings of an awareness of Aristotle's Categories in the writings of Thomas and Cyrus of Edessa, to the much greater knowledge evidenced by Barḥadbshabba's Cause of the Foundation of the Schools at the end of the century. Particularly significant is his discovery that Barḥadbshabba clearly knew Sergius of Resh'aina's Treatise on the Categories. This is also of interest since another work of Sergius, the treatise with which he prefaced his translation of Ps. Dionysius the Areopagite, was quoted by Barḥabshabba's contemporary, Gabriel of Beth Qaṭraye (the Gulf region), in his commentary on the Liturgy. Intellectual ideas, and evidently books, too, containing them, travelled unhindered by political and ecclesiastical boundaries.

It is undoubtedly the case that, without the three works mentioned above, our understanding of the intellectual history of the Church of the East in Late Antiquity would have been considerably different. Although the fame of the School of Nisibis had reached Cassiodorus in the West, little would have been known of the background of how and why this School in an obscure border town of the Persian Empire should have gained such a reputation. The significance of Addai Scher's publication of these texts in helping to explain this phenomenon is excellently brought out in Adam Becker's 'Mar Addai Scher and the recovery of East Syrian scholastic culture', where he also asks interesting questions about how Scher himself perceived the significance of the texts which he published, seeing that he was working at a time of the growing self-awareness of both the Church of the East and the Chaldean Church.

What sort of institution was the School of Nisibis? This and other questions are discussed by Ute Possekel, who concludes that the evidence suggest that it was "an autonomous institution with a corporate identity that transcended that of any individual master or scholar" (unlike the case of, for example, Athens). This would certainly seem to be correct, despite the fact that it is with the names of specific teachers at the School that the available narrative sources are concerned. Furthermore, when looked at from the wider perspective of higher education elsewhere in Late Antiquity, the School of Nisibis genuinely appears to have been "an institution sui generis".

The ensuing five chapters are concerned with select aspects of the reception of Greek philosophical ideas over the period 7th - 13th century. Not surprisingly the Patriarch Timothy I features prominently in two chapters. Martin Heimgartner, who has recently edited the second half of the collection of Timothy's Letters, examines Timothy's knowledge of the Organon and the use to which he puts it in Christological polemic. The polemical use of such knowledge is already evidenced in a remarkable text by Timothy's predecessor, Hnanisho' II, preserved in the Synodicon Orientale. It is this phenomenon which is examined by Nestor Kavvadas, who draws attention to earlier monastic critics of the theological use of this sort of material. It is clear from a number of sources that there was tension between the scholastic approach of the School of Nisibis and of the other theological Schools, and certain monastic authors, such as Dadisho' and Isaac of Nineveh. Is it of any significance that both men came from a different academic background and maybe tradition, that of Beth Qatraye? But it also needs to be remembered that they were mainly writing with Solitaries in mind, and their primary concern was to specify what genre of reading is appropriate for different levels of the spiritual life: the scholastic genre is fine in its proper place, but totally unsuitable in the context of the life of a solitary.

The Syriac translation of the Pseudo-Dionysian corpus by Sergius of Resh'aina constitutes one of the earliest witnesses to the existence of these writings. The question of how influential they were in the East Syriac monastic tradition is taken up by Emiliano Fiori, who concludes, certainly rightly, that it less influential than has sometimes been thought, and that the East Syriac authors probably read them in collections of excerpts (a few of which survive). This situation is thus in sharp contrast to that in the West Syriac tradition, where a revised translation was made by Phokas in the late seventh century, thus in Isaac's lifetime, and was subsequently commented on by several authors, including Dionysius bar Ṣalibi, manuscripts of whose commentary have recently come to light.

The remaining two contributions both concern the interaction between the East and West Syriac traditions. Alexander Schilling provides a careful synoptic analysis of the Qur'an quotations in Timothy I's Dialogue with al-Mahdi and those in Dionysius bar Ṣalibi's recently published Against the people of the Muslims (Ṭayyaye). The final chapter, by Jens Ole Schmitt, considers some of the East Syriac influences on the great Syrian Orthodox polymath, Barhebraeus. Barhebraeus' ecumenical outlook and his use of Muslim sources in several of his works is well known, but at least in his philosophical works there seems to be no clear use of East Syriac sources, perhaps, Schmitt suggests, "due to a lack of matching" East Syriac texts. In this connection it might be worth investigating whether Barhebraeus had any knowledge of the philosophical works (mostly unpublished) by Ioḥannan bar Zo'bi; it was under bar Zo'bi that another famous Syriac scholar, Severus bar Shakko had studied dialectic. Indeed, as this whole collection suggests, there are many new avenues for future research on the heritage of Greek philosophy within the East Syriac tradition; it is to be hoped that it will have provided a stimulus for further explorations on this topic.