Franz Posset: Marcus Marulus and the Biblia Latina of 1489. An Approach to his Biblical Hermeneutics, Köln / Weimar / Wien: Böhlau 2013

Robert Bartlett: Why Can the Dead Do Such Great Things? 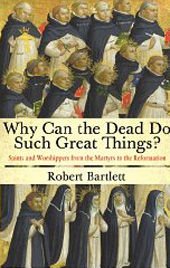 This large and engaging book is a study of a major strand of Christian devotion, presented as enduring themes and adaptive variations. Why Can the Dead Do Such Great Things? will be of interest to those new to the cult of the saints, those seeking information on specific saints or facets of their cults, and those seeking order in the fecund field of hagiography. Bartlett writes, "I hope the book will lead readers to the vast and invigorating literature that has blossomed around the cult of the saints, from the moving account of the deaths of Perpetua and Felicity in the third century to the bubbling world of current scholarship on the subject" (xvii). The book is quite accessible to a general reader, dense with interesting anecdotes, each well-chosen to illustrate the point at hand. Although its focus is on the West, saints in the East are illuminatingly incorporated from time to time.

"A saint was not a person of a particular type but a person who was treated in a particular way" (95). Part II takes up various facets of the "dynamics" of the cult of the saints this particular way of treating those deemed holy: "The Nature of Cult," "Saints' Days," "Types of Saint," "Relics and Shrines," "Miracles," "Pilgrimage," "Dedications and Naming," "Images of the Saints," "The Literature of Sanctity," "Doubt and Dissent." Each of these chapters are wide-ranging, illuminating both universal themes and local and chronological variations. The final chapter, "Reflections" compares the Christian cult of the saints with the treatment of the dead, including martyrs, heroes and ancestors, in various other religions. Bartlett points out functional and ritual similarities, but ultimately asserts the distinctiveness of the Christian cult of the saints in bringing together the living and the dead, distinguishing saints from other dead, being grounded in martyrdom and asceticism, and being institutionally centered on tombs.

Chapter 5, "The Nature of Cult" comes closest to answering the question posed in the book's title. Certain dead Christians can do great things because they are intercessors and patrons for living Christians, " 'sown' across the land by a loving God to act as a bridge between desperate human beings and his divine powers" (103). But despite the title, this really is not Bartlett's focus. He is less interested in the theological "why" and more on the "how," "what," "where" and "when" of the cult of the saints in practice. The book's subtitle: Saints and Worshippers from the Martyrs to the Reformation, indicates the phenomena for which Bartlett offers his richly-textured thick description.

Bartlett writes, "What gives the saint's Life its coherence is not its structure but its purpose. Every hagiographic work is 'an exercise in persuasion,' and its purpose was to persuade the reader that its subject was a saint" (519). These persuasive writings are discussed in chapter 13, "The Literature of Sanctity", and are themselves the main sources for Bartlett's study. Although Bartlett is clearly aware of current trends in hagiographical studies and cites the statistical work done by earlier historians, he only occasionally engages in analytical argument with other scholars. Throughout the book, the author's pattern is to make a claim about how some aspect of the cult of the saints functioned and then provide several examples to support it; the vast majority of his footnotes are to primary sources. The range of materials cited makes clear that Bartlett has a remarkable familiarity with the material and has chosen his examples for their illuminating potential.

The longest chapters are those devoted to "Types of Saints" (chapter 7) and "Relics and Shrines" (chapter 8); each includes many subsections. Bartlett reminds the reader that any list of saints is just a list of "people who are treated as saints" (137) and that hagiographical evidence illuminates times when their cults were flourishing rather than their (sometimes imaginative) historical times (141). Types of saints discussed include the Virgin Mary, Angels, Apostles and Evangelists, Martyrs, Confessors (including Doctors of the Church, Bishops, Abbots, Hermits), Virgins, Old Testament Saints, Lay Saints, Royal Saints (including Female Royal Saints). Saints served as patrons of churches, cities, nations, and individuals. Relics include whole bodies, numerous body parts, and various objects that were in contact with saints' bodies or tombs. Most often housed in shrines in churches, relics were also collected by individuals as part of their personal spiritual and material treasure. The movement of relics involved invention (their often miraculous discovery), translation, processions, gifts, even theft.

Chapter 9, "Miracles", begins with the assertion that the question of what actually happened "is not an illegitimate question, and it is one that can, at time, be answered" (333). Those who behold a miracle experience wonder, power, and meaning (334); even those whose cure was delayed or never forthcoming would ascribe meaning to this outcome within the framework of providence (360-64). Saints generally performed more miracles after their deaths than while living; healings formed the largest category of miracles, with close to two-thirds of these addressing paralysis, blindness, and deaf-mutism (353). At the book's end, Bartlett concludes that the broad and enduring appeal of the saints "can be explained partly because the cult of the saints met needs, in particular the need for the hope of cure in a sick and suffering world without effective medicine, but it also suffused the imagination of worshippers" (637). Other saintly miracles discussed here include miracles of provision, visions and prophecies, aid in war, exorcisms, Edenic relationships with animals, liberation from prison, and punishment of those who disrespect the saint or harm the saint's devotees.

The book includes a glossary of key words, a number of images (both black and white and color plates), a very extensive bibliography of primary and secondary works, and an index. The author includes many internal cross references; for a book of its size, there is remarkably little repetition. Bartlett writes with relish for his subject, tells its marvelous stories well, injects judicious doses of good humor, and leaves one with the sense that the cult of the saints is a pervasive feature of Christianity's historical texture.