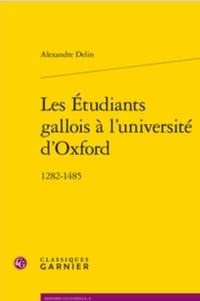 One of the more exciting developments in the history of medieval universities in the last three decades is the prosopographical turn, the exploration of the regional and social backgrounds and careers of groups of university students and masters. For Oxford and Cambridge this was enabled by A. B. Emden's two biographical registers of those universities up to 1500, published more than a half century ago but which have only in recent decades begun to be mined prosopographically. [1] For the University of Paris this approach has formed the basis of graduate training under Jacques Verger and Jean-Philippe Genet at the Sorbonne. The author of the book under review comes out of Genet's graduate seminar.

In choosing to study Welsh students at Oxford in the fourteenth and fifteenth centuries Delin has not only selected a specific regional group but one that until the late thirteenth century was outside the political boundaries of England and belonged to the Celtic fringe. Like the Irish and Scots, they were to some extent outsiders from the student majority, with a native language other than English for some. But given the difficulty of ancestral origins of those coming to Oxford from Wales, Delin has been careful to define Welsh by region rather than ethnicity.

The book is divided into three parts. The first is an overview of the sources used: those from the university and colleges; registers from the four Welsh dioceses along with some from England; calendars of papal letters and petitions; and published records in the royal archives. He also used some unpublished college records from All Souls, Lincoln, Magdalen, Merton, New College, and Oriel, as well as some documents from the Public Records Office. While employing a prosopographical approach, the author discusses the limits of the method, particularly the effect of the disparate nature of the sources and the loss of records, which can affect the balance of information on individuals within a group and thus distort attempts at global comparisons. From there he proceeds to discuss the number of Welsh students at Oxford over time in relation to the university population, their local and diocesan origins, their social origins and financial situation, and their clerical or non-clerical status: lay, secular clergy, monastic, or mendicant.

The second part concerns programs of study, benefices and patronage, and subsequent careers in church and state. Most were students in arts, while almost 80 % of those who went on to study in a higher faculty pursued a degree in law, and the rest in theology. Income from benefices, prebends, and cathedral dignities along with patronage connections fills in the picture of financial support.

The third part examines the life of Welsh students at Oxford to the extent it can be gleaned from the sources. This includes the average number of years as students or teachers at Oxford, places of residence, association as a group, administrative positions held, study abroad, book possession, and authorship. Delin also considers the element of conflict and violence, and the role of Welsh students in internal and town-gown conflicts. The degree to which Welsh students formed a self-contained sub-unit and whether this amounted to a 'regional' or 'national' identity are also explored. Equally assessed is the post-university career, both church careers as pastors, episcopal administrators, holders of higher office as archdeacons and bishops, or those in papal bureaucracy. Those who entered royal service are also well covered.

Finally, and most importantly, the book includes a biographical register of the 304 students identified as Welsh (appendix I), a biographical register of Welsh students at Cambridge (appendix II), a description of the database compiled (appendix III), tables (appendix IV), and three sketch maps of Oxford showing the colleges, convents, and halls, respectively. Because most of the information for the biographical sketches comes from Emden's registers, it is possible to trace the document source of each piece of information on individuals, since that is the method Emden employed. The high percentage of individuals in the biographical sketches that date to the fifteenth century may reflect a growth in Welsh students at Oxford since the early fourteenth, but it is far more likely to be a result of an increase in the amount of documentation available. The names of Welsh scholars in the first two appendices, which are catalogued by last name, would have been more easily recognizable had the author put a comma between last and first name as did Emden.

The book concludes with an extensive bibliography and indices of names of persons and places at Oxford. The name index could have used more attention. It seems odd that Augustine is alphabetized under 'Saint Augustine', while Saint Thomas Aquinas is entered under 'Aquin'. And among the places where William Courtenay, archbishop of Canterbury, is cited, one finds a page reference only to an article of mine that does not mention the archbishop.

This book is an excellent contribution that provides an in-depth knowledge of a specific regional group at Oxford in the fourteenth and fifteenth centuries. More studies of this variety should be undertaken as a means of uncovering trends and changes in university attendance over time and variations in regional background. The predominance of Welsh students from the Marches rather than the territory of the Welsh princes might have been suspected but could be documented only by this kind of study. A similar study for Scotland, expanded beyond what D. E. R. Watt has done, might add more regional, political and personal detail to the picture of why some Scottish students chose to go to Oxford or Cambridge while most chose to go to Paris.