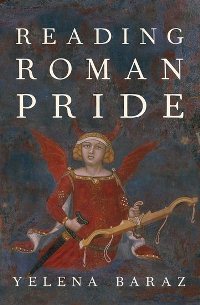 No Roman would describe himself as proud. In contrast to the modern English pride concept that includes positive and negative connotations ranging between accepted forms of self-evaluation after a successful action and forms of self-evaluation that are synonymous with arrogance and haughtiness, the Roman pride discourse devalues pride as a negative emotion. This cultural difference is the starting point for Yelena Baraz to dive into the semantic field of Latin adrogantia, fastus, insolentia, and superbia. It is a story that owes much to the traditional methods of a history of concepts, but also to the concept of "scripts" that were introduced into Classics by her tutor Robert Kaster, a pioneer in the field of a philologically inspired history of emotions that does not stick to mere lexical observations but looks at contexts that describe the evolution of an emotion. [1] To use Baraz's own words: "I follow this approach in reading for scripts around Roman pride: the types of situations and hierarchies in which pride is likely to be found, what triggers pride, what range of responses it elicits, how it works depending on the actors' relative positions, and how it is conceived when the focus is not on human actors but on other entities, places, and institutions" (6). For Baraz, the lexical and the script-driven approach are complementary to each other.

Accordingly, the monograph is structured around this bias. Apart from the concise "Introduction" (1-11), it is divided into three main parts. "Part I. Scripts and Words. General Approaches to Roman Pride" (13-76) firstly deals with "1. Semantics". The chapter examines the different connotations of pride terms that were also used interchangeably. Non-regarding these lexical differences, "2. Stages" designs the general pride script by analysing "Causes of Pride", "Proud Behaviors", and "Reacting to Pride". Here, the importance of power relations, that were responsible for responses to pride and that depended on the hierarchical positions of the involved actors, come into play. In "3. The Peculiar Case of the superbia Group" Baraz turns to superbia by denying any positive meaning of the term in the Republican era. Livy's account of Tarquinius Superbus is used to demonstrate how much the pride group was shaped by the opposition to a one man's rule.

In "Part II. Scripts. Institution and Place" (77-148) Baraz applies the scripts to the institution of "4. Kingship" and the place of "5. Capua". While the first demonstrates how accusations of behaving kingly are closely connected to pride scripts and work as an effective denunciation transcending Roman regimes, Capua incorporates a city opposing Rome. Even centuries after she had fallen, the reputation remained and people living there were accused of being proud in the negative sense of the script. In conclusion, these structural studies that desist from individual behaviour illustrate the impressive continuity of the script; phrased differently: the conservativism of Roman thought.

"Part III. Words. The Transformation of superbia" (147-264), in contrast, focuses on change and semantic transformation that occurred with reference to the superbia cluster only from the Augustan period onwards. One of Baraz's central theses is that Roman pride was deeply embedded in Roman Republican aristocratic culture, a concept that was politically inspired by denying monarchical aspirations, but that pervaded all spheres or Roman life (4 passim). But what happened when Augustus climbed the throne? This is how a story evolves out of the philological observations. By looking at "6. Vergil's Aeneid, Pride Unsettled", "7. The Transformation of Pride in Augustan Poetry", and "8. Positive Pride in Post-Augustan Literature", in the Augustan era, Baraz argues that a positive and neutral version of superbia emerged in addition to the old, persisting meaning of the term. With reference to the pride scripts, the Augustan era is an era of major change in addition to striking continuity.

Because every part and chapter have their own conclusions and there also is a concise preview of the main topics and thesis in the introduction, no general conclusion is needed. Instead, the "Coda: The Triumph of Stoic Virtue" (265-274) opens a new field by introducing "a Stoic picture of a triumph of virtue that appropriates positive pride in the service of philosophy" (265) - a picture that emerges from a letter by Seneca the Younger (Sen. epist. 76). By embedding this analysis in the results of the former chapters, Baraz induces the reader through Latin sources up to Late Antique pagan authors and alludes to the major change happening in Christian contexts. However, this would be another book to be written, and the author leaves it there.

This is a well-structured monograph. As Baraz is the perfect guide through her book, the reader cannot miss her central messages. First, Roman pride was a politically shaped emotion whose character depended on the Roman Republican aristocratic self-image that evolved by denying any behaviour reminiscent of the monarchs the nobility once had condemned when founding the Republic. The strand of negative associations with the pride scripts attests Roman conservativism transcending centuries and regimes. However, the Augustan era witnessed change in the superbia cluster that developed positive ascriptions in addition to the persisting negative meaning. What is more, from Seneca onwards, Stoic philosophers began to use a positive concept of pride within their philosophical agenda.

"[...] pride in Roman discourse is never simply an emotion: it is a political and social concept, deeply implicated in ideas of power" (5), Baraz resumes. She stresses to have written a book on Roman emotions and values on the one hand and on Roman discourse and thought on the other (5). Is this really a twofold approach to the topic? Most prominently, Martha Nussbaum has stressed that emotions are inseparably linked to thoughts. [2] As much has happened in the history of emotions since Kaster has written his monograph [1], the term emotion should be defined with more caution. However, for Baraz's agenda, lexical and script analysis is what serves her best. She has published a convincing book on a key concept of Roman culture that helps us to better understand how the Romans conceived their compatriots acting when showing a politically and thus also culturally inacceptable manner of putting oneself in the foreground. And she has demonstrated that major political and mental change on the one hand can happen in accordance with deep conservativism on the other.

[2] Martha Nussbaum: Upheavals of Thought. The Intelligence of Emotions, Cambridge 2001 with the comment by Barbara H. Rosenwein: Emotional Communities in the Early Middle Ages, Ithaca / London 2006, 24: emotions are "upheavals of thoughts [...] that involve judgements about whether something is good or bad for us. These assessments depend, in turn, upon our values, goals, and presuppositions - products of our society, community, and individual experience, mediators all."