Kathryn Stevens: Between Greece and Babylonia 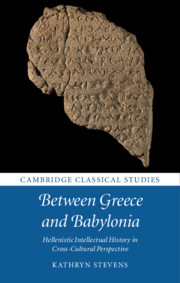 In this impressive book Kathryn Stevens uses Greco-Babylonian cultures to show how much remains to be gained in understanding the Hellenistic world. She endeavors to see together what has hitherto been mostly considered separately, and in doing so shifts her gaze from the Greek metropolises, especially Alexandria, to local centers, e.g., Uruk or Delos. She tries to open our eyes for parallels, with which the Babylonian-Hellenistic world had reacted to the new present, as well as the Greek-Hellenistic one. Stevens wants to demonstrate a new approach to linking the two cultures and regions, formulating a "new paradigm for Hellenistic intellectual history" (6), for which Greek and Babylonian culture in the Seleucid empire are a mere test case. This is an ambitious project that ultimately starts from the question of whether there are specifically Hellenistic intellectual practices beyond a Hellenocentric model.

Stevens first surveys Babylonian-Greek acculturation from the 'orientalizing' period to the first century BC, then discusses astral sciences in Babylon, Greece, and their mediation routes. We learn, for example, of Babylonian astral knowledge in Geminus or Ptolemy, and of Egyptian papyri showing that Babylonian constants had a place in astronomical-astrological Greek practice. Stevens shows that there may well be geometric concepts behind Babylonian dates. The Antikythera mechanism here gets the status of a witness for a synthesis of Babylonian (arithmetical data, predictions) and Greek (geometrical models of space) ideas.

Such clarifications could impact other fields, such as medicine or mathematics, where dichotomous concepts are still common. Stevens focuses on concrete cases, e.g., Berossus, a Babylonian writing in Greek, and the Graeco-Babyloniaca, tablets from Seleucid Babylon showing cuneiform on one side and Greek on the other (chapter 3). For Berossus, Stevens shows that he is reusing narratives from Akkadian lore and had access to inscriptions and Babylonian chronicles. However, he also has a Greek side, evident, for example, in polemics, first-person interventions, ethnological digressions, or even Stoic overtones. Berossus obviously tried to connect the traditions (Manetho suggests itself as an Egyptian parallel). [1] The Graeco-Babyloniaca are to be understood best as aids of Aramaic speaking Babylonians to learn Akkadian with the help of a Greek transcription. According to Stevens, at least part of Berossus' audience must be imagined in the manner of these scholars.

Whoever searches for the contexts of such cultural contacts may think first of Alexandria, especially its libraries. Stevens, however, shows conclusively (chapter 4) that one must dispense with the 'universality trope' of the Alexandrian libraries in particular. All reports of the Ptolemies' promotion of non-Greek texts should be seen as anachronistic charter myths. This clarity is refreshing especially in light of the recent discussion of the so-called Aristeas letter. The Ptolemies specifically collected Greek literature in the context of a panhellenic representational policy in competition with the other Diadoch states. The same is probably true for the Pergamenian library. From another perspective, namely the quest for the origin of the library concept, and in contrast to recent views on the Ptolemies, Stevens shows the discontinuities with Babylonian temple libraries, whose religious dimension is clear (for example, the library of Esagila, a sanctuary Marduk, is limited to omen texts) and whose functions amount to supporting the sacral functions of the king. The study of Egyptian temple libraries would probably have shown something similar.

Perhaps, however, the royal courts provided contexts of mediation? [2] Masterfully, Stevens recounts Hellenistic contacts between rulers and intellectuals (incidentally, her potentially anachronistic use of 'intellectual' is striking). On the Greek side, the sources exhibit a constructed sphere of intimacy between the two groups. Stevens attempts to clarify whether the Diadochs had contacts with indigenous intellectuals, as anecdotes occasionally assert (229ff.). For the Seleucids, contacts with temple scholars are attested; the Ptolemies represent as pharaohs and need the local temple elites, etc. For Stevens, these are "targeted legitimizing manoeuvres" (225), far from Greek patronage concepts. Doubts remain as to whether 'patronage' might not be an overarching concept after all, which is just described differently in the sources. A list of Greek intellectuals at Diadoch courts (238ff.) shows that most of these individuals had contact with the rulers as politicians and that these contacts were irregularly distributed over the dynasties and the centuries: for the Ptolemies of the third century and the Attalids the evidence is strongest. In the early phase of these regimes, rulers were primarily concerned with legitimacy in a multiethnic environment. This makes these regimes comparable again and their interactions with local elites seem at least homologous.

In the last two chapters, Stevens tries to show that beyond the differences there is a common substrate for the operation of intellectual elites in the Diadoch empires. Exciting is the "new paradigm" Steven announces: namely that one can prove analogous changes of geographical ideas in the Greek and contemporaneous Babylonian texts. On the Greek side she employs a comparison of the place names in the Historia animalium of Aristotle written before the conquests of Alexander and those in the Historia plantarum of Theophrastus written after. Stevens demonstrates changes in terms of the density and precision of geographical information in the East. Thus, only in Theophrastus one could speak of a truly 'Hellenistic East'. An analogous examination of the Babylonian astronomical diaries yields the counterpart: Corresponding to the findings in Theophrastus, the Babylonian texts in the third century show a 'Hellenistic West', i.e., more and more nuanced place and ethnic designations directly related to the Macedonian conquests. Stevens' suggestion that one can follow these trends into the Parthian period is promising. We are thus facing changes in knowledge structures running in parallel. The isolation of these knowledge structures is laborious and will probably be debated, but the method indeed provides approaches towards a new paradigm.

The final chapter applies the same model to concepts of local history. Stevens argues that local histories, whose function for Hellenistic poleis is well known, were part of a cross-cultural phenomenon. Like the Greeks, Babylonian elites used narrative constructions of the past to adapt their identities to changing regimes, that is, to coordinate their local autonomy with the imperial claims of the new rulers. For Uruk, Stevens draws on Anu-a&#7723a-u&#353ab&#353i, being a typical representative of a local elite. Stevens gives an overview of these families; some even have Greek names (325: Anu-uballi&#7789;/Nikarchos). She juxtaposes this group with individuals such as Semos of Delos (FGrHist 396), writers of local histories, in this case a <i>D&#275lias</i>, i.e., a historical work centered around a local cult. Stevens cites similar cases from Delphi and Ephesus, among others, from which a class of "<i>peri patridos</i> writers" emerges. To this group she assigns the Lindian Chronicle. This text covers the entire Mediterranean region in its "authentication story" (Dillery), but relates it to the sanctuary at Lindos. Stevens concedes that the temple scholars at Uruk probably represent a circle more tightly closed than the Greek local historians. However, she shows that the negotiation of local identity and supra-regional power is similar in Seleucid Babylon as well, using Anu-a&#7723a-u&#353ab&#353i's 'Uruk Chronicle' (composed 251 AC), which works with paradigmatic concepts of the past. What emerges as a cross-cultural phenomenon is the assertion narrative of local sanctuaries under new masters, to which a geographical inversion of center and periphery corresponds. Stevens claims that these are other, yet equally important, dimensions of intellectual life beyond the Hellenocentric hubs. In other words, Timachidas and Semos, according to Stevens, have more in common with Anu-a&#7723a-u&#353ab&#353i and Anu-uballi&#7789; than with Eratosthenes. An epilogue (chapter 8) concludes the argument: The culture of Seleucid Babylon is Hellenistic <i>and</i> Babylonian. In a few remarks, she outlines that her method could be extended to the Roman Empire. Stevens concludes with the gesture of positioning this book as a mere prolegomenon to a future "intellectual history of the Hellenistic world" (376).</p> <p>Stevens has done much with a few well-chosen and well-researched cases. Ptolemaic Egypt should definitely be used more as a level of comparison, because it is well documented and historians have long been thinking about the relationship between local centers and new Ptolemaic power. [<a href="#fn3" name="fna3">3</a>] One could apply Stevens' basic result ("disparities conceal deeper similarities", 359) to the Ptolemaic Empire and the Attalids, possibly even to local centers in the later Roman Empire. It seems to me that the focus on expert cultures should either be more inclusive (medicine and numerical knowledge should play a larger role) or, preferably, limited to experts of the past. In my opinion, the last chapters show that this latter field proves the most productive. In sum, Stevens' book should be standard reading to all scholars interested in Hellenistic acculturation.</p> <p><br /><span class="underline">Notes</span>:</p> <p>[<a href="#fna1" name="fn1">1</a>] See John Dillery: Clio's Other Sons: Berossos and Manetho, Michigan 2015. </p> <p>[<a href="#fna2" name="fn2">2</a>] For Greek Hellenistic courts, see Marquis Berrey: Hellenistic Science at Court, Berlin 2017.</p> <p>[<a href="#fna3" name="fn3">3</a>] For example, Werner Huß in many publications, e.g., Der makedonische König und die ägyptischen Priester, Stuttgart 1994.</p> <p class="italic" style="text-align: right">Markus Asper</p> </div> </div> </div> <div id="page_footer"> <div class="ie6_font_size" id="separator"></div> <p>issn 1618-6168 / www.sehepunkte.de <img height="10" src="/images/sp10.jpg" width="10"> </p> </div> </div> </body> </html>