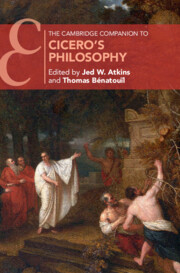 As Thomas Bénatouïl and Jed W. Atkins remark in the preface of their volume, the regard for Cicero as a philosopher has fluctuated greatly over the centuries. While contemporary views on Cicero's philosophy have not reached the heights of the eighteenth century, where he was considered the most important philosopher of antiquity, his work has nevertheless enjoyed a considerable revival over the last several decades, in contrast to the relative disinterest of the nineteenth and early twentieth centuries. This volume serves as both a commentary on this revival and, more substantially, as a contribution to it. It is not merely a collection of essays on the philosophical works of Cicero, although many of the essays within do serve this function. Rather, it is a more comprehensive look at what informed Cicero's ideas and output, the ideas themselves, and even the later reception of his work. All in all, this is a guide to understanding both Cicero's philosophy and Cicero as a philosopher, in addition to some core elements of reactions to him and his thought over the centuries.

Most of the essays in this volume can be considered as contributing to three broad areas. The first is on Cicero's philosophical influences, style, and motivations. The next is on his considered philosophical output and beliefs, such as traditional commentaries on his philosophical works. The final area focusses on the reception of Cicero's ideas from antiquity until today, including both how they were received in different eras and the type of contemporary relevance which they have or should have. Naturally, most of the contributions are not limited to strictly one of these areas, but this is the broad ground which the volume sets out to cover.

One particularly useful element of this volume is the focus on Cicero's letters, found in several of the essays. Although Cicero's published works and orations remain the main sources of our views on his philosophy, this attention to his letters allows for a better understanding of his philosophical process and the development of his ideas both over the course of his life and even while specific works were being written. Sophie Aubert-Baillot's essay focuses on this aspect of Cicero's philosophy specifically, but Malcolm Schofield's essay on Cicero and Plato and Gretchen Raydams-Schils' essay on nature and social ethics draw on his letters profitably as well. In addition to the commentary on his letters, Claudia Moatti's essay on the general intellectual culture in which Cicero wrote and the increased Hellenization of the time period situates Cicero's works in relation to both his context and motivations. This complicated relation with Greek culture and philosophy is further explored in Carlos Lévy's essay on Cicero's creation of a Latin philosophical vocabulary, which addresses his adaptation of Greek concepts to both the Latin language and Roman culture.

There is also a good deal of material on Cicero's specific philosophical influences. In addition to Schofield's essay on Plato, Tobias Reinhardt's contribution on Cicero's Academic skepticism at the level of the person, author, public figure, and dialogue character (each labeled with a distinct superscript) was a particularly insightful addition. Charles Brittain and Peter Osorio contribute an essay on the Ciceronian dialogue in light of Cicero's Platonic and Academic influences, which along with Catherine Steel's essay on philosophy in his speeches, clarify how his motivations and methods change depending on his medium and situation.

The material on Cicero's developed philosophical positions focuses mainly on Cicero's ethical and political philosophy, but not exclusively. Clara Auvray-Assayas writes on Cicero's cosmological and theological views throughout a variety of his dialogues, with particularly focus on De Natura Deorum, and Elisabeth Begemann writes on his views on determinism and fate, focusing on the De Divinatione and De Fato. Both contributions excel at showing how Cicero engaged with the Epicurean and Stoic views in light of his unique personal and philosophical commitments. Moving then to ethics, Sean McConnell's essay on emotions and the soul in Cicero, drawing mostly on the Tusculan Disputations, shows Cicero's philosophical preference for Plato's immortality of the soul and Stoic cognitivism. Raphael Woolf writes on the De Finibus, showing both Cicero's engagement with various ethical philosophies and how this engagement serves to present these as options to a Roman audience. Cicero's political philosophy receives the most extensive treatment of any topic in the volume. Gary Remer writes on Cicero's views on philosophy in relation to rhetoric and politics, showing the intense importance of the unity of these elements to good political life, and Jed W. Atkins writes on Cicero's international politics, specifically his views on imperial expansion, just war, and cosmopolitanism. But in addition to the essays focusing just on Cicero's views on political philosophy, the material on reception heavily addresses this aspect as well, due to its immense historical importance, with many essays serving as both a commentary on Cicero's political philosophy and its reception.

The material on Cicero's reception does not attempt to give one treatment for every major era of Western philosophical history. Rather than being chronologically comprehensive, it focuses on just a few eras or authors where Cicero's philosophy had a marked influence. Anne-Isabelle Bouton-Touboulic's essay on Cicero and Augustine provides a look at his influence in late antiquity, but the next era which receives real treatment is Cicero's effect on the political thought of the enlightenment period. Daniel J. Kapust's essay covers this in relation to specific philosophers, such as Locke, the mores of the time, such as eloquent letter writing, and specific political topics, such as civil religion and law. Walter Nicgorski's essay on Cicero's republicanism looks more specifically at Cicero's own ideas about government and their effects on the ideas of the American founders, particularly John Adams. Martha Nussbaum's essay on Cicero and contemporary political philosophy, in addition to some brief commentary on his reception, gives an argument for why Cicero should be more prominently read today and shows his unique contributions to several often-neglected modern areas, like the philosophy of aging and friendship.