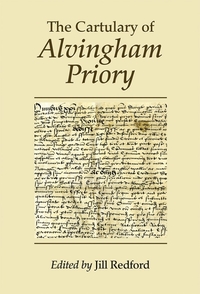 Established sometime between the foundation of the order's mother house at Sempringham in 1131 and January 1155 (the latest possible date for the earliest documents in the cartulary), the Gilbertine priory at Alvingham was situated in Lincolnshire, its holdings scattered across north-east Lincolnshire, from Conesby to Boston and from Lincoln to Saltfleetby.

The priory's cartulary is, of course, a very interesting and valuable source of information about the priory itself. As its most substantial documentary record known to us, it provides the researchers with information about land transactions and meanwhile it also gives us the names of the priors and allows to draw many conclusions about men and women who have entered the community, and, more generally, about social relations in medieval Lincolnshire. It provides, for example, the names of the representatives of the local gentry whose daughters had entered the priory with their gifts of land, and allows us to conclude that the priory's founders belonged to this group. Thanks to the cartulary we can establish the list of the priors. Other names mentioned in the charters are those of donors and their relatives. All this information enrich our knowledge of the medieval prosopography.

It was therefore a commendable initiative on the part of Jill Elisabeth Redford to make this monument available for a larger public. Her book is divided into two main parts: the commentary (contained in the Introduction and in the Editorial Method) and the cartulary itself. It is followed by a glossary, an appendix and an index.

All the conclusions mentioned above have been summarized by the author in the introduction and in the appendix containing genealogical tables referred to in the text (there are 11 of them). The final Index contains the names of all the persons the cartulary is referring to.

It should be emphasized that the volume by Jill Redford is undoubtedly valuable (especially if combined with the online edition of the PhD thesis by the same author) and a prime example of very thorough and competent work. The editorial decisions concerning the transcription of the texts are sound and very well exposed. The conclusions drawn from the cartulary content are convincing and useful. The calendaring has been done in a very professional and reliable manner.

Here we come however to the only feature of the book that may raise some questions. Its title is in fact somehow misleading. Seeing the mention "edited by Jill Redford" one can believe that it is, in fact, an edition of the cartulary. But the main part of the volume, the chapter called "the cartulary" does not contain the transcription of all the documents. For the total of 1310 entries present in the manuscript, transcriptions of only 127 have been provided. It contradicts the statement found in the chapter on the Editorial Method that "all documents have been transcribed and remain in the order in which they appear in the cartulary". The solution of this puzzle is to be found in the Preface. Unfortunately, this part of the book contains mostly acknowledgments (which is another misleading feature of the book). Among those the Author placed one paragraph that is in fact crucial to the understanding of the book. The reader learns there, that the edition of the cartulary was in fact the PhD thesis and that the complete Latin text can be viewed online. The address of the website contains however a typographical error: http://www.etheses.com/whiterose.ac.uk instead of www.etheses.whiterose.ac.uk. In this short paragraph we also find the essential remark: "In the present edition I have calendared most of these documents". So, what we have in fact, is a calendared document, not an edition, and it would be preferable to have this information more emphasised. Another problem is the lack of any explanation concerning the choice of the documents that have been presented in full, not only calendared.

Of course, seeing that the book containing the transcription of merely 10% of the cartulary counts already some 600 pages, the decision to provide only a partial transcription seems totally justified, especially since the complete edition is available online. It is also understandable that those of the documents that had already been published somewhere else (like the first entry that has been printed in W. Dugdale's Monasticon Anglicanum), have not been selected for this edition. But it is not the case of most of the entries that have been calendared only.

One would therefore expect some explanation. The calendaring method means that the most important or most interesting documents can be edited in full. But what exactly were the criteria of this selection? The author unfortunately does not provide any such information.