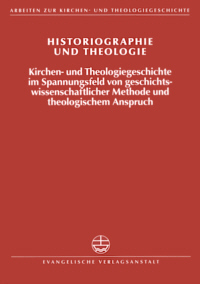 The problem addressed here - re-formulated as a desideratum for study by the late Kurt Nowak - is obvious, interesting and relevant: what is the relationship between church history and its secular cousin? The answers these authors provide are not consistent, as contradictory essays by the two historians of the Orthodox Church reveal: Dimitros Moschos denies the possibility of a conflict between history and church history, while Athanasios Vletsis suggests difficulties in even discussing Orthodox church history because of the group's theological orientation toward the eschaton. The answers suggested here are not even always convincing, as Michael Slusser's essay about the ways church history is taught and researched in the American context unfortunately reveals: he suggests that American scholars of religion have deserted the study of theology and doubt the possibility of religion sui generis, and that American church historians find very little problematic in the opposition of historical method to theological presuppositions. Ulrich Muhlack sketches the outline of an answer when he points out that historians expect added value relating to theology from Kirchenhistoriker, who are characterized by their connection to "eine in dogmatischen Sätze niedergelegte Verbindlichkeit" (37). Many readers will disagree with some assertions made here, and we should remind ourselves that no one can make a convincing statement on such a topic in fifteen pages or fewer. The better essays in this volume, however, take on the matter head-on.

What added value does a Kirchenhistoriker provide? What, in particular, is a methodology? Is it a particular, at least potentially value-neutral, technique for examining sources (as Muhlack, who has implicitly distinguished the practice of historicism from its telos in a way that students of German historiography might debate) or a group of normative theological presuppositions, as Klaus Fitschen thinks? Is Kirchengeschichte "true" in a way that history is not? Must its author believe in God or the Church, as Hubert Jedin famously insisted half a century ago? What are the consequences of such belief for method? Some of the answers offered to the reader appear to plead for more limited solutions: Fitschen, who asks church historians to consider more fully the subordination of their subject to theological principles, for example. In this same framework of the limited answer, but apparently moving in the opposite direction, Albrecht Beutel analyzes the continuing relevance of Gerhard Ebeling's definition of church history as the "Auslegungsgeschichte der Heiligen Schrift", concluding that this principle (in its connection with evangelical confessions) adds an anachronistic normativity that prevents rapprochement with secular history research. He substitutes here, as he has elsewhere, the idea of the "Inanspruchnahme des Christlichen" (115). Other suggestions are unabashedly presentist, such as Friederike Nüssel's suggestion that historical theology primarily serves to illuminate contemporary theological concerns. Such solutions are practical, albeit controversial, but appear at least in the form presented here to prioritize the values of one discipline over another in their union of the two.

Some essays push the disciplines against each other more forcefully, with somewhat less credibility. Hubert Wolf starts the reader with Schiller's distinction between the true historian and the Brotgelehrter, an academic hired gun who proves his starting hypothesis rather than examining evidence on its own merits - and suggests, in apparent contradiction to Muhlack, that the church historian does not proceed from foregone conclusions, but is rather pledged to consider two different realms of plausibility in his explanations: both empirical reality and the theologically relevant independently of systematic theology. History itself is a locus and something that is theologically true (he uses the example of papal infallibility) should not be able to be proven false in the empirical realm. It sounds optimistically Thomist, and as the remainder of Wolf's essay shows, the real-existing church seldom employs such criteria in its decision-making.

The inherent conflicts of Wolf's position for the secular historian, however, seem to come to a head in the area of Frömmigkeitsgeschichte, the subject of the essay by Wolfgang Sommer. It left me confused; after three readings, I was still unsure what Sommer meant by Frömmigkeit. Many of his examples, like preaching, skirt a central epistemological problem exemplified by less immediately rational piety like Marian apparitions (potentially irrelevant to Sommer as a Protestant). Does the Virgin Mary actually appear to the faithful, and who, if anyone - secular historians, Catholic church historians, Protestant church historians - is required to take that particular plausibility seriously? Particularly Frömmigkeitsgeschichte seems to bring its students frequently into realms that cannot be proven true or false by either historicism or theology. Some authors find this state of affairs more acceptable than others - Wolfram Kinzig suggests that the inability of humans to agree on a single definition of dogma necessitates more, rather than less, incorporation of the dogmatic-historical position in research. Günther Wartenberg, in defining the origins of the idea of "confession", suggests our modern understanding of the term and the obstacles it creates for us in unifying secular and church history are anachronistic. Michael Beyer also suggests that dogmatic diversity provides a unique opportunity to consider church history in its full flower, and Martin Wallraff is immediately prepared to concede that the expectations of a universal Christian history to answer metaphysical questions about the sense of human life have been disappointed.

In the face of so many dilemmas, three concluding essays attempt to forge a path forward: Kinzig rejects the necessity for a separate history of dogma and argues for a fully integrative church history, Nüssel points out the necessity for a contextualizing theological history that inter alia fulfills the task of systematic theology, and in the only essay that proposes a strong affirmative methodological course, Volker Leppin suggests a meeting of the disciplines in the realm of semiotics, as an example of urging theology to work interdisciplinarily at just those points where a methodology can be assumed to be at work. This solution appears to me to potentially increase the relevance of theology to other disciplines, but since semiotics is so heavily dependent on interpretive matters, a resort to that method might raise as many problems as it solves, even as Leppin resists what he sees as tendencies toward the reconfessionalization of church history.

In the face of such diverse opinion, Leppin's introduction to the volume is a godsend, and readers of these essays should read it at least once before and once after examining the essays, several of which will also bear re-reading. A major concern of many of the contributors - whether church history is an independent discipline or a Hilfswissenschaft to something else - will seem odd to non-Germans. This question will be increasingly important in Germany, where shrinking congregations and the financial crises of the provincial churches have reduced the number of positions in theological faculties. In this atmosphere, Kirchengeschichte needs to justify itself as both a separate field from secular history and as a topic that should be instructed separately from dogmatic or systematic theology. This approach may surprise any reader in the US, Africa or Latin America accustomed to thinking of Christian piety as growing rather than shrinking.

Thankfully the larger questions raised by the book are more pressing in a world sense, even more than Michael Slusser, the American contributor, acknowledges - and even though only Martin Wallraff's essay touches obliquely on the international or universal significance of understanding church history. Writing as a secular historian, it is nonetheless difficult for me not to think of the ever-increasing numbers of students in US university classrooms who want specific knowledge about theology and how significant precisely some entry-point for historicism is in that setting. At the same time, exactly at the point where historians have realized that the increasing secularism of Europe is not the norm for world modernization, what the history of Christian theology has to add is its obdurate insistence on ecclesiastical and religious history as factors with independent, rather than epiphenomenal, status. Leppin notes as a point of consensus, "dass der Gegenstand der Kirchengeschichte Religion ist, das heißt, dass Gott nur im Modus der Religion behandelt werden kann". To insist on this fact is a strong point of potential cooperation between Kirchenhistoriker and their Profanhistoriker cousins.

One imagines that Nowak would be pleased to have seen his questions taken so seriously at such a theoretical level and presented in a focused volume - an infinite improvement over the typically diffuse festschrift.