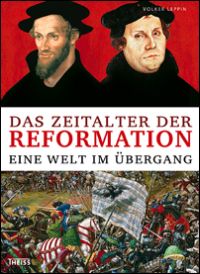 The ceaseless flow of new general histories of the Reformation testifies to the ongoing fascination of the period for students and a wider general readership. This book is a useful addition to the genre, for although it does not contain any new or unusual perspectives on the events, it provides a clear and interesting account of the Reformation, which draws on recent research and discussion. It stands out however from many other general histories of the Reformation for both the quantity and the quality of the illustrations which, in general, provide additional detail and context to the text. This is seen, for example, in the excellent reproduction of Cranach's paintings on the theme of Gesetz und Evangelium.

The author provides a detailed account of religious life in the centuries before the Reformation, which draws together the growing tensions of the period. He shows the problems caused by tensions between the church and its clerical hierarchy and the rulers and people of Europe, on both administrative and spiritual levels. The development of Luther's growing opposition to the church is tied into this background, which also serves to highlight the innovatory aspects of Luther's work, both as a theologian and as a skilful communicator. What emerges is the extraordinary participation of the lay authorities, firstly civic governments and later territorial rulers, in making decisions as to whether the new teachings should be protected and enacted, regardless of the demands of the pope or the bishops.

The book is strong in its description of the religious and political context for change in early sixteenth century Germany. The accounts of the later Reformation and the spread of religious change across Europe are less detailed and successful. The analysis of Calvin's teaching and his appeal seems almost perfunctory in contrast to the treatment of the early Reformation, and the tendency in general to rush through the later stages of the Reformation, is all too apparent here.

That said, this is an attractive and readable survey of the Reformation which draws on recent research, and it will undoubtedly be of use to all new students of the period.