Fawzi Habashi: Prisoner of All Generations. My Life in the Homeland. Translated by Jano Charbel, Berlin: Klaus Schwarz-Verlag 2011

Viktor Taki: Russia on the Danube 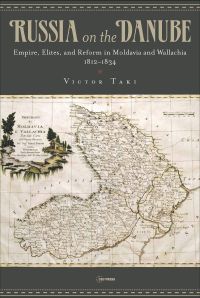 Viktor Taki's Russia on the Danube: Empire, Elites, and Reform in Moldavia and Wallachia focuses on Russian policies during the Empire's many occupations of Moldavia and Wallachia. The book demonstrates how important Russian reform efforts were to the "political evolution of the principalities" and argues that "the principalities were central to the Russia's self-representation as the protector of its co-religionists in the Ottoman Empire" (1). This manuscript fills a great gap in our understanding of the development of political culture in the principalities later to become part of the Romanian nation-state.

The book comprises an introduction, seven chapters and a conclusion. The author makes use of an impressive array of sources including Russian and Romanian archival material, published resources and secondary literature in languages such as Romanian, Russian, English and French which allows him to demonstrate how the Russian Empire was not "an entirely foreign entity that acted upon Moldavia and Wallachia 'from outside'" and how the Empire can be viewed "not only as a large authoritarian state created through conquest, but also as a place of interaction between the imperial center and the elites of the frontier regions." (7). The "elites of the frontier," i.e., the boyar families of the principalities, and their interactions with Russian imperial officials are at the center of Russia on the Danube's narrative. Interestingly, in the boyars' correspondences with the Russian Empire, the latter "emerged not as the champion of its Orthodox co-religionists, but specifically as a protector of the traditional privileges, that the principalities enjoyed within the realm of the sultan" (14).

The chapters are organized chronologically. The first chapter briefly describes the Ottoman advance into the principalities and describes efforts by some select Orthodox figures to make use of Russia's rising importance as an Orthodox power. Interestingly, from the very start, these appeals included references to "customs of our land" and "old rights" just as it would be the case in Polish, Hungarian, or other noble-based entities' appeals to foreign monarchs.

Taki focuses in the second chapter on the attitudes of Russian administration towards the idea of revolution through the examples of Ioannis Kapodistrias and his plans of reform which "remained within the political paradigm of enlightened absolutism" (67); and Bessarabia which was acquired by Russia at the end of the War of 1806-1812 and was given a statute which gave Bessarabian noblemen "wide participation in local administration" (76). Despite this experimentation in wider participation, a new wave of revolutions in 1820s forced Russian officials to choose monarchic legitimism over constitutional monarchy.

The Greek Revolution of 1821, which was part of this new wave is discussed in the third chapter. Taki points out that immediately after the revolution started the boyars began petitioning the sultan and the tsar and asked for a return to the "ancient privilege" of having a native ruler, rather than a Phanariot prince who was appointed from Istanbul. The flight of many great boyar families gave the second and third rank boyars the opportunity to present themselves as loyal subjects of the Sultan and push for equality in boyar ranks. However, this period ended in the Convention of Akkerman (1826) which proposed a return to the status-quo of previous treaties and ensured the continuing influence of the great boyar families.

This was however a period of increased tensions between the Ottoman and Russian empires which ended in war in 1828. This time, thanks to their continuous involvement in boyar struggles in the previous decades, Russian officials were "better informed than ever before about the situation in the principalities" (162). The war started with the Russian occupation of the two principalities that came with the promise of reforms in their administration and ended in the Treaty of Adrianople (1829) in which Nicholas I continued to pursue his "weak neighbor" approach to the Ottoman Empire, opting for its preservation and choosing not to annex the two principalities.

This choice included a Russian reform effort in the principalities, which would be formulated and carried out by to General-Lieutenant Pavel Dmitrievich Kiselev. Taki argues that the outcome, the Organic Regulations, ended up disappointing all boyars who were busy struggling against each other, which helped the establishment of Russian dominance in the Principalities (217). However, Kiselev's arguably maximalist propositions which included the prolongation of the Russian occupation of the two principalities were not implemented as Russian policy favored good relations with the Sublime Porte following the Treaty of Hünkar İskelesi (1833) which lent the Ottomans Russian support in the face of Muhammad Ali's challenge.

The Statutes themselves were "one of the last attempts to implement the well-ordered police state ideal in Eastern Europe" (233). Measures like quarantines, the creation of a militia and resulting limitation of the armed retinues of boyar families, a fiscal reform which came with a codification of the corvée aimed not only at controlling the population of the principalities but also at making them a buffer zone between the two empires. However, Taki demonstrates that these regulations soon started being used to police what Russian authorities considered to be subversive political ideas that emanated from the West and lost their "anti-Ottoman" significance.

The Russian occupation of the two principalities ended with the signing of the Convention of St. Petersburg in 1834. Still, the Organic Regulations stayed in power and the principalities continued to be ruled by native rulers. Russian consuls continued to be extremely influential in the political struggles among the boyars and hospodars until 1840s. Russian policymakers wanted to use the principalities as a cordon sanitaire that would be a line of defense against "subversive ideologies" but in the process they lost their position as "the principal sponsor of political transformation in Moldavia and Wallachia" to the Ottoman Empire (319).

Russia on the Danube is a meticulous study of a much-neglected subject. Victor Taki demonstrates how local elites and imperial representatives compete and negotiate to achieve their ends in a revolutionary era. The Russian Empire, in this picture, does not emerge as simply a traditional expansionist empire but one that is in constant conversation with local elites and willing to promote the tenets of enlightened absolutism. The boyars of Moldavia and Wallachia in this narrative are not powerless actors that suffer Russian expansionism, or men with a nationalist mindset seeking the unification of Romania. To the contrary, they are powerful actors that can help determine the course of Russian policies and act to further their own interests.

Studying the intersection points of empires is always a daring endeavor that can highlight the weak points of connection between what are still very separate bibliographies. Taki's valiant effort together with its amazing contributions ends up highlighting the lack of communication between Ottomanist and Russianist bibliography as well. The author's assumption that the Ottomans are "retreating from Europe" in the late 17th century onwards is hard to substantiate (21). We see the Ottomans gaining back some of its influence as a sponsor of political transformation in Romania after 1838, which begs the question whether the Ottoman "modernization" itself, the infamous Tanzimat had made any impact on this shift which is left unmentioned. The author mentions Constantin Ypsilanti's plans to create a local militia to protect his territories against Pazvantoğlu Osman's incursions as "anti-Ottoman" (246). This feels wrong given the fact that the Ottomans allowed Serbian knezi to have their own militia against the same Muslim magnate and princes of Wallachia and Moldavia had specific instructions to gather intelligence against him, apart from participating in the siege of his stronghold, Vidin, in 1797. Finally, Taki argues that the boyars' preference of Russia over the Ottoman Empire was the result of a lack on the Ottoman side of "officials able to speak the political language of the boyars, who increasingly incorporated Western idioms" (326) This is, in fact, a good argument but it still needs to take into consideration that the Ottoman Empire declared war on Russia in 1768 with the claim to be defending the ancient liberties of Polish Catholic nobility. If this "political language" was one of enlightened absolutism and ancient privileges there was a certain clique among the Ottoman officials that could in fact talk the talk, the Phanariots who produced the rulers of Moldavia and Wallachia, prime among them.

All in all, Russia on the Danube will open new horizons for the study of the Danubian principalities, Russian and Ottoman empires and the era of revolutions where transition from empire to nation-state took place. By going beyond nationalist tropes and perspectives that construct the Russian Empire as essentially expansionist and autocratic but also by highlighting the lack of communication, and perhaps lack of studies, among Ottomanist and Russianist historiography, Victor Taki made an invaluable contribution.