Fawzi Habashi: Prisoner of All Generations 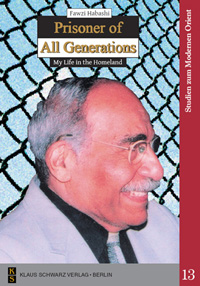 If you look in Cairo's quarter Hada'iq al-Kubba for al-Khandaq Street, you find the house of Fauzi Habashi and his wife Thuraiya Rashid. This time she would not signal danger by hanging out a white sheet to dry on the balcony. After the Tahrir Revolt swept Husni Mubarak's police state away, all are in high spirit in this place of three generations. What a lucky turn. For Habashi had not yet completed his engineering study at Fu'ad University in 1946, as his name already appeared on the secret service wanted list. Thus, Thuraiya signaled whether or not the coast was clear around her family with three little children.

How an odyssey of his ten years and her five years in prisons of the Nile state between 1948 and 1987 went on, Fauzi Habashi reveals in his biography "Muataqal Kul al-Usur." In 2004 he edited this moving story in Arabic, best translated as "Prisoner of All Eras." It reflects his life as hostage under King Fu'ad and the Presidents Abd an-Nasir, Anwar as-Sadat and Husni Mubarak. I can only hope that a movie will be made based on this book.

Thanks to a hint given by Habashi's second son Mamduh to the Berlin publishing team of Gerd Winkelhane, English speaker can read this autobiography of one of the great sons of Coptic origins. Probably Fauzi Habashi would not mention his roots for two reasons. As a Communist he is clearly much more familiar with Lenin than Jesus. On the other hand, this Christian notion brings something into his life which this man of a minority within a minority always tried to avoid: Fitna, the civil or other strife of big and small religions.

His compatriots knew that he is a non-Muslim. Some meant that he is dangerous, a leftist. Surely, the reader would like to learn about his switch from Christian roots in al-Minya of Upper Egypt to atheism. Did his father inspire him, Habashi Khalil Awad, who distrusted the Christian cleric in his village of Sharuna? He had lived and died in poverty, stressed his son, but he was dedicated to realize one dream: that his children receive a university-level education. And it happened for Khalil's son Fauzi who longed for more knowledge.

The left leader Mahmud Amin al-Alim says "even though Habashi was a Christian," he helped others in prison to build a house for Muslim prayers. It was called "The Mosque of the Communists." Although life was very harsh there, the 1924 born Habashi enlightened others with his wonderful spirit. The leftist prison literature, Adab as-Sujun, and history in Egypt held four ways for political activists: the Wafd party, the Muslim Brotherhood, the splintered left, and the right of Nazi fame as Ahmad Husain's Misr al-Fatat in close cooperation with the Palestinian Grand Mufti Amin al-Husaini. For the latter became since the 1930s hardly distinguishable of the pro-Nazi Brotherhood, the choice was for Habashi between nationalist bashas and global rafiqs. How he became a red comrade?

The Fu'ad I. University was a hot bed of activism. Ten Marxist groupings spread in Cario and Alexandria. Habashi visited two of them in cultural centers. The Workers Vanguard was led by Egyptian Jewish converts to Islam such as Yusuf Darwish, Raimund Duiq and Ahmad Sadiq Sa'ad. Henri Curiel's Democratic Movement for National Liberation who, as Habashi says, as a Jew opposed the Nazis, saw Hitler Germany as enemy number one. Habashi went to the Young Men's Christian Association too. He attended Salama Musa's lectures who called for an industrial base, democracy and a withdrawal of all colonialists.

Following Habashi's life, the reader might find the big twist on the left side. In 1933 the common democratic viewpoint regarded the Soviet Empire as enemy number two. But for any real democrat the democracies such as America and Great Britain (plus later Israel) were the most misjudged and slandered allies number one. So the left fought foe number one by allying with enemy number two. As Nazism went down, they still wanted a Soviet "democracy." For this, many good men and women like the Habashi's went into prison. But it became abundantly clear after Stalin's death: it was just another totalitarian system with huge Gulags. Habashi says they only heard the good things about the Red Empire.

Well, a great deal of mistakes goes to the vast but already forgotten Kaiser, Nazi and Soviet propaganda blaming "imperialism." This poisoned many. It was then impossible to reach common sense solutions between states. As the "imperialists" went home in 1956 neither freedom nor democracy emerged. A lifelong suppression of Egypt's best and brightest as the Habashi's by shabby dictators indicated civilizational decay. We know by protocols [1] that Abd an-Nasir liked to imprison the left again, after Soviet leader Nikita Khrushchev asked for their release in 1964: if they become active. To Habashi's credit, he was not for the self-dissolution of the left. Many meant Abd an-Nasir was a Socialist. But on July 9, 1967 a desperate president said on himself to the East German envoy: "Without declaring it officially, in reality we are Communists." [2] Since ever he spent two weeks in the Soviet Union in 1958 his motto was "nationalization plus Aswan High Dam is Arab Socialism." Showing himself as a Communist after a lost war was a logical result of his failed policy. For a long time Umar at-Tilimsani's Islamists, the third guide of the Muslims Brothers, had portrayed him as a Communist, and therefore went not that wrong. [3]

Since 2011, however, the Arab Spring is disposing of tyrants. In this light, the experience of the Egyptian left flows into the texture of a new Misr. If I read all the charters drafted by the Democratic Alliance for Egypt, by Islamists or by al-Azhar men like Ahmad at-Tayyib, I see the broad lines from many sides. Most do refuse a clerical state. Freedom, dignity, equality, and transparency for which the Habashi's fought hard, will be secured in social contracts. Egypt returns forward to some middle path of moderation and liberalism.

Of course, all of this does not change human nature. But a regime which limits excesses of which the Habashi's saw so many examples in prisons, can manage a better life for all. I hope that new people enable themselves to revise the stance on America and Israel. Both are democracies. As such they are allies and not inclined to destruction. In this very point, there needs really to be a fresh start as well, away from old propaganda and Jew-hatred.

Finally, as Fauzi Habashi was thrown into jail again in 1959, there appeared a courageous Egyptian woman. In early December she distributed a leaflet to embassies of the Eastern bloc in Cairo about the dehumanized condition in the evil prison of Abu Za'abal. Perhaps, Fauzi Habashi can finally help in identifying her. I posted her letter [4] of protest on the web in Arabic as well. Eastern Europe was too silent and complacent about all those abuses of their left comrades in Egypt. There were and are shared human values not to be destroyed regardless of any regime. Habashi's fight sets a great example also toward the left errors. Historians now can better reconstruct how so many people became prisoners of all eras.