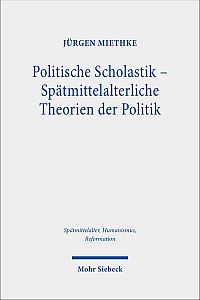 Jürgen Miethke's œuvre stands at the center of research on late medieval political theory. He has brought particular clarity to the political thought of William of Ockham and Marsilius of Padua, as well as that of Thomas Aquinas, Giles of Rome, John Quidort of Paris, and many others. The present book brings together a series of major research articles, most of which were written since his retirement as Professor of Medieval and Early Modern History at the University of Heidelberg in 2003.

The twenty-six articles in this volume, written between 1980 and 2017, are assembled under four themes. An overview of the contents reveals the range of his contributions in this volume. The first section, entitled 'Probleme', contains five articles on late medieval political theory and the issues under debate. The first article covers the tensions and conflicts between lordship and freedom, the limits of lordship, the delegitimizing of unjust lordship, and discussions of the legitimacy of political opposition and tyrannicide. The second article concerns the treatment of emerging secularized states in late medieval political theory, and the third on the standardization of political theory in the fourteenth century. The fourth article is on the relationship and conflicts between papal policy and the common good, and the fifth on church reform in the context of the conflict between pope and emperor.

The second section, entitled 'Traditionen', contains eight articles. The first is on the reception of Aristotle's Politica in the late thirteenth and early fourteenth centuries as seen in Thomas Aquinas, Giles of Rome, and Marsilius of Padua. The second is on religious self-understanding and theories of corporation in the fourteenth century. The third is on the political theories among Augustinian Hermits, a mendicant order that contributed much to late medieval political thought. The fourth article examines the use made of the Pseudo-Dionysius' political ecclesiology among the Augustinians. The fifth is on Marsilius and Ockham on conciliar theory. The sixth is on the so-called Constantinian gift, or the fictional claim that Constantine granted political authority over Rome and the surrounding area, and in some versions the western empire, to the papal curia. The seventh article is on the controversy between the Order of the German Knights, or Teutonic Order, and the kingdom of Poland before and after the Council of Constance. The eight is on scholastic theologians and the emergence of the modern state.

The third section, entitled 'Positionen', contains eight articles on the contributions of particular thinkers. The first examines Thomas Aquinas' De regno, and the second is on Raymond Lull's Arbor imperialis. The third article is on Marsilius of Padua, particularly his Defensor pacis. The fourth is on the reception of the political thought of Marsilius and Ockham. The fifth article is on the views of the canonists, Lupold von Bebenburg and Peter von Andlau, on government and the State. The sixth is on the Ritmaticum of Lupold von Bebenburg and its two translations into German by Otto Baldemann and Lupold von Hornburg. The seventh article is on Konrad of Megenberg's Tractatus contra Occam, and the eighth is on Nicholas of Cusa ideas of reform for the church and empire.

The last section is on theory and practice in the thought of scholastic theologians in the thirteenth and fourteenth centuries. The first of the five articles placed here is on learned political counsel in the late medieval period, its extent and effect on secular rulers. The second is on political theory in Latin and vernacular dialogues in the fourteenth century. The third article is on Albertus Magnus and his role in the reception of Aristotle's Politica. The fourth is on the competition between theologians and canonists over which group was better suited and capable in understanding and expounding political theory. The last article is on the effect of political theory on political practice at the court of Ludwig of Bavaria in the early fourteenth century, where Ockham and Marsilius were, for a time, in residence.

Taken together, these articles represent a major, indeed magisterial contribution to our understanding of late medieval political thought, particularly within the context of the German empire and the late medieval papacy. In many ways it is equivalent to a major monograph on these themes. Miethke brings to this subject years of work in editing and translating the political works of Ockham, Marsilius, and Lupold von Bebenburg into German. In the case of Ockham, sections of his Dialogus, some of which had not previously been edited, were introduced to the scholarly world. [1] Similarly, on Marsilius of Padua he piloted Horst Kusch's translation of Richard Scholz's edition of Defensor Pacis into publication (Darmstadt 2017). On Lupold von Bebenburg, with Christoph Flüeler, he produced Politische Schriften des Lupold von Bebenburg, a massive volume for the Monumenta Germaniae Historica (Hannover 2004), and Bebenburg's De iuribus regni et imperii (München 2005).

Miethke's in-depth analysis and his particular attention to the audience for works on political theory, their reception, and their influence on political practice is especially noteworthy and is too often ignored. These seminal articles are comparable in the area of German medieval historiography to what Joseph Strayer's "Laicization of French and English Society" article in Speculum (1940), Gaines Post's numerous articles on public law and the state collected in Studies in Medieval legal Thought (Princeton 1964), and Brian Tierney's work on Church and State did for our understanding of Medieval political theory from the standpoint of Anglo-Saxon historiography.